A Field of Flowers

In my attempt to sew some of my stock of kits this year I decided to stitch a little embroidery I bought probably over two years ago at Yarndale. It’s a design by Anne Brooke, I love her designs, especially Harold the Hare, I saw him first at an Embroiderers Guild meeting, he is amazing. At Yarndale she had some little kits of pre-printed cotton just waiting to be embroidered.

I have to be honest and say |I was a little disappointed when I got home to find there wasn’t any instructions, or even a picture suggesting ways to embroider it, all there was with the printed design was a hoop, grey and ecru floss and a few mini buttons. Hence it has sat in my to do box ever since! To be fair to Anne, looking on her website these kits are no longer sold, her current kits include suggestions of stitches and a photo, they generally look a lot more comprehensive… and mine was just a little inexpensive one! 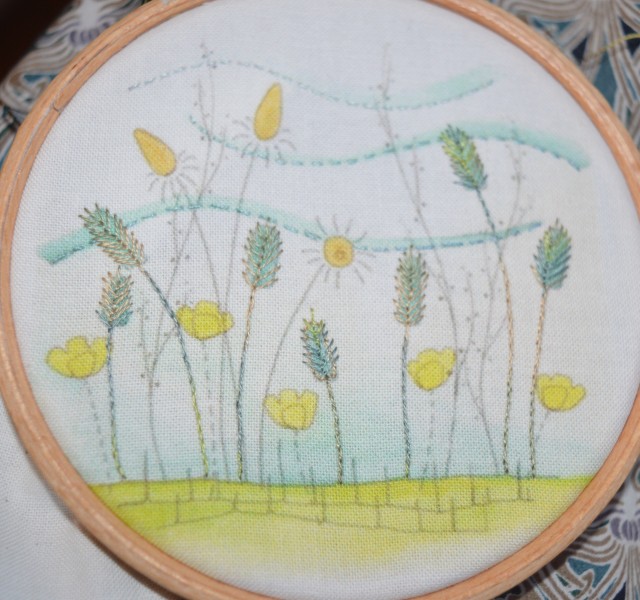 I decided to bite the bullet and start! I chose a few variegated DMC threads which I thought would give a pretty but more muted effect. I started to stitch the grass seed heads first, I used fly stitch, making it a bit bigger than the printed area to make it look feathery. The stalks are stem stitch. Both are stitched in DMC 4065.

Half way through the seedheads I thought I really should embroider this from the background to the foreground so I stitched the wavy lines next, I’m not sure if they are hills or clouds, but I just used a running stitch in 4020. 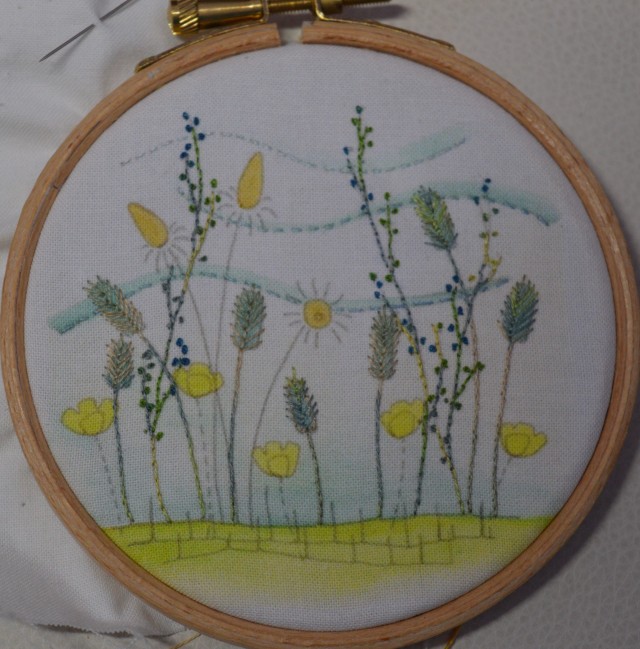 I stitched the tall, spindly plant next, I decided it could be like a wild lupin with tiny blue flowers. I used 4506 which is green, blue, grey and beige. Where possible I used the green and the blue for the french knot flowers and the lighter shades for the stems.

The buttercups were just edged in split-stitch, mainly because I couldn’t think what else to do with them! The grass along the bottom is actually buttonhole stitch made with irregular stitches. 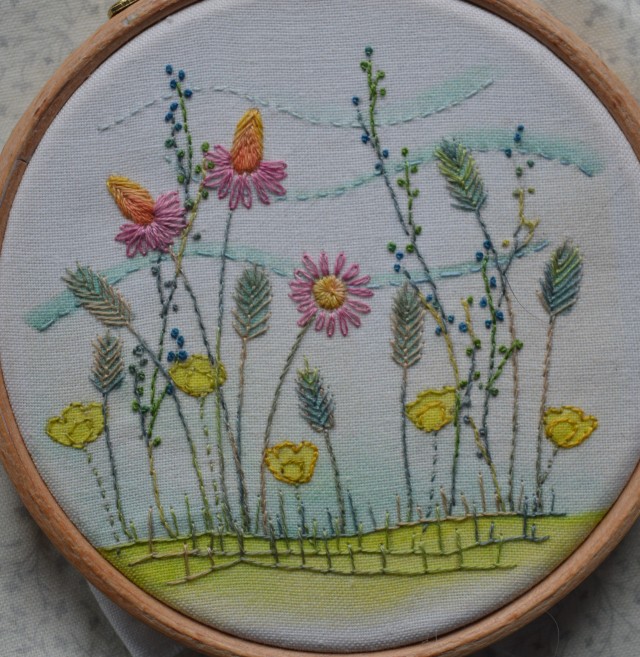 Having stitched it I then had to decide what to do with it! A pincushion, a needlecase, a hoop picture…I decided to make a mini wall hanging with different fabrics and stitching, I’ve seen rather a lot on Pinterest and I do like the effect. This would be a bit of a practise piece too as I’ve lots of my mothers work, both finished and unfinished and I’d like to put them in a textile book made up of pages like this.

I like the ones with a mismatch of squares and rectangles, but it was a bit too random for me to try first! I started with log cabin, light at the top and darker at the bottom, using mainly bits from my scrap bin. The bee was added because my chosen fabric wasn’t quite long enough! The bottom squares was a strip left over from my Down the Rabbit Hole quilt. 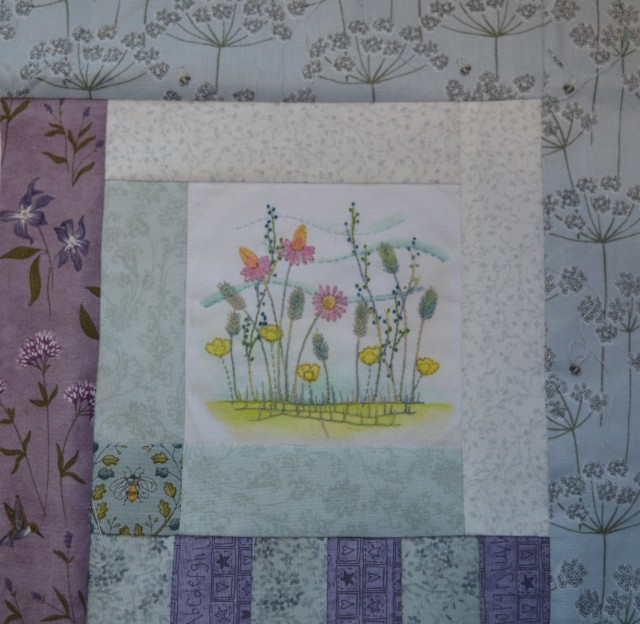 Having made a two strip wide log cabin I felt it didn’t quite look right. I turned the two sides in a bit and the balance looked so much better! 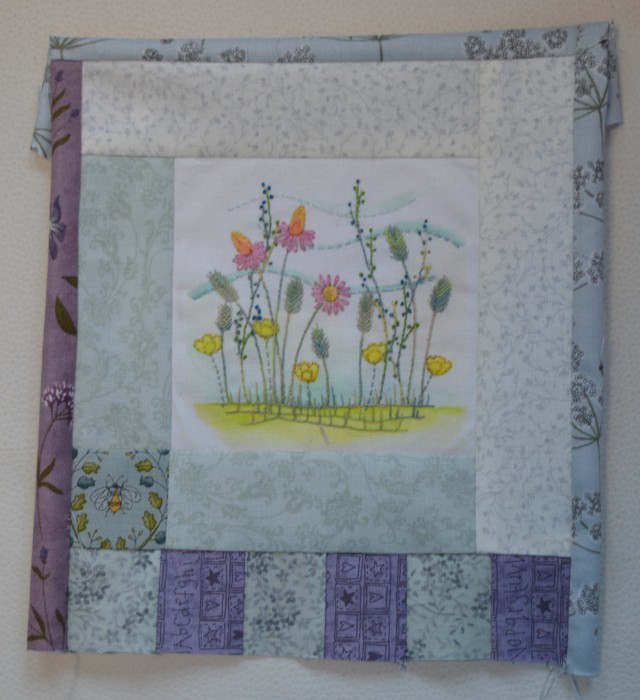 I’ve stitched a little embroidery along the inner strips using feather, fly and herringbone stitch. I then stitched three flowers up the final side. 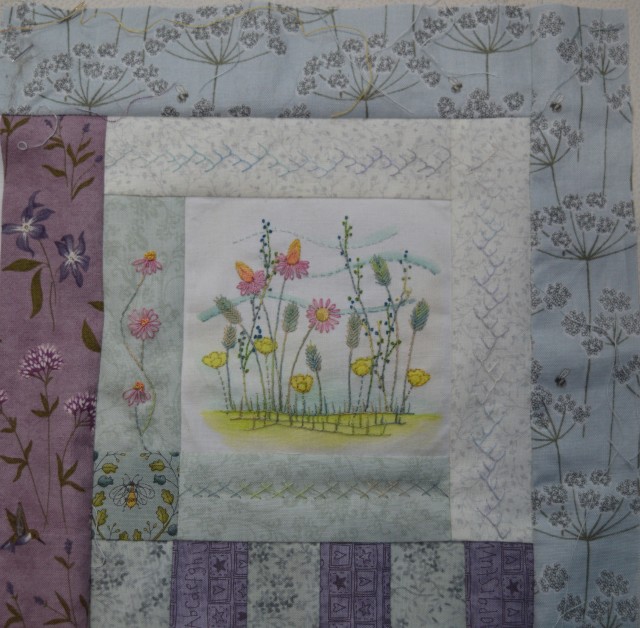 My plan now is to sandwich it with some batting, do some very simple quilting before turning the extra borders over as binding. I’ll stitch a final purple binding along the bottom. Some mini buttons, maybe some beads or a charm will just finish it off.

I live in a busy market town in Yorkshire with my husband, kids, dogs and chickens. I love trying new crafts, rediscovering old ones, gardening, walking...anything creative really I started this blog after my New Year resolution worked so well. My resolution (the first one I've ever kept!) was to post a photograph of my garden on Facebook every day. My hope was that I would then see what was good in the garden and not just weeds and work, which was my tendency. The unexpected side-effect was that I have enjoyed many more hours in the garden. I am hoping that 'The Crafty Creek' will have the same effect. Happy creating!
View all posts by craftycreeky →
This entry was posted in embroidery, Serendipity and tagged Anne Brooke, embroidery, log-cabin, Quilting. Bookmark the permalink.

28 Responses to A Field of Flowers