Posted on September 10, 2017 by craftycreeky

I started the year really good, remembering to do a review of each month, but for the last few months I’ve remembered half way through the next month and then it seems too late! Let’s face it, we’re almost a third of the way through September!! I’ve decided to do a seasonal round-up instead, so here’s my review of summer here on the Crafty Creek… I’ve got quite a few things on the go!

My Down the Rabbit Hole quilt has come on leaps and bounds (sorry for the pun!) In the middle of June I had just finished making all the houses having got a bit behind, it looked like this; 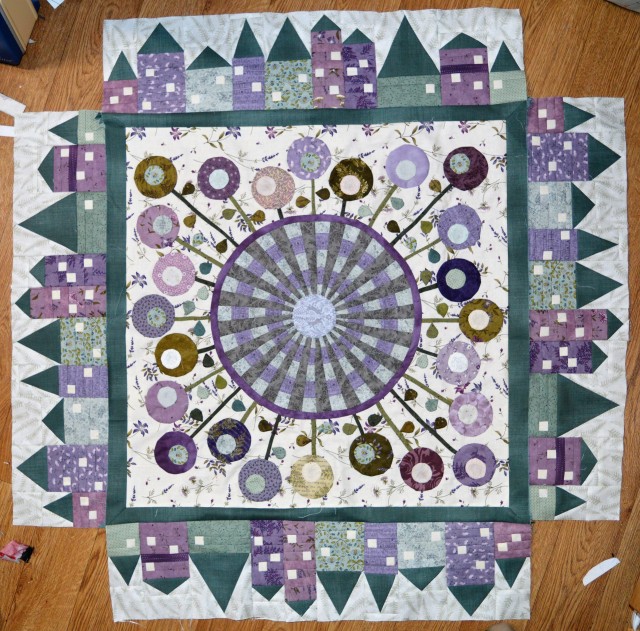 Over the summer we finished the village border with some suns in the corners and then moved onto the next deep border where the suns became sunflowers and they were joined by large dresden flowers which caused a few consternation’s in the colour planning department. I’ve learned alot stitching this quilt and it’s certainly pushed me out of my comfort zone more than a few times. This month we’ve got a narrow border of elongated hexagons to stitch, I’ve not even started cutting out yet! 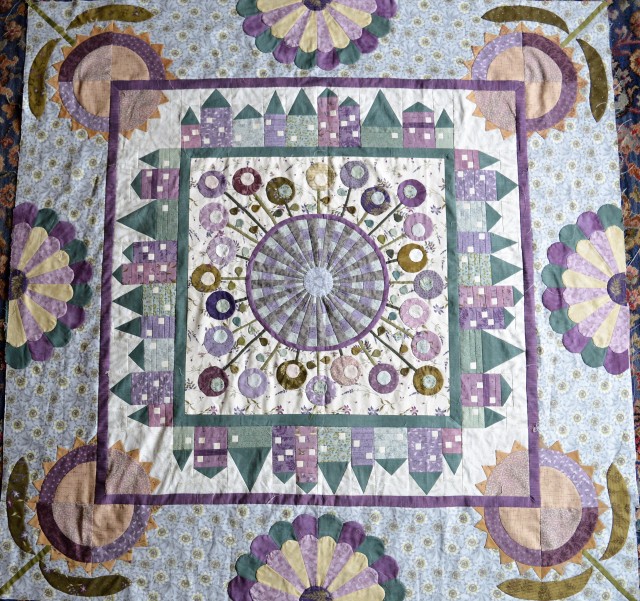 Just at the end of summer I’ve started another quilt for Helen, Elephants on Parade, hopefully that will be finished in time for her birthday in the middle of September. 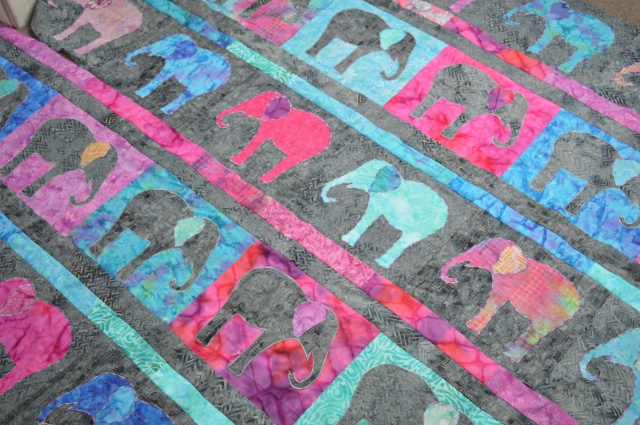 I think over the summer I’ve been most pleased with my progress on my Flower Lattice which I’ve been stitching as part of the stitch-a-long. I’d only done a little ribbon work before and stumpwork was completely new to me when I started this project. It’s taking a lot longer than I anticipated, mainly because it’s not very mobile. At the beginning of the summer I had stitched just five of the diamonds, I’d just finished the one with yellow irises on… 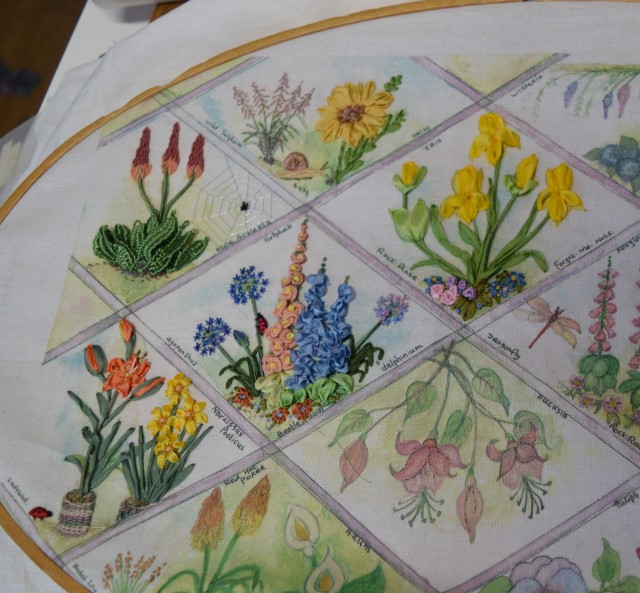 Over the summer I’ve managed to stitch another four diamonds, I’ve just started stitching the basket ready for the orange tree so watch this space. With just three diamonds left to stitch the end is in sight so I’m starting to plan my next big embroidery project! 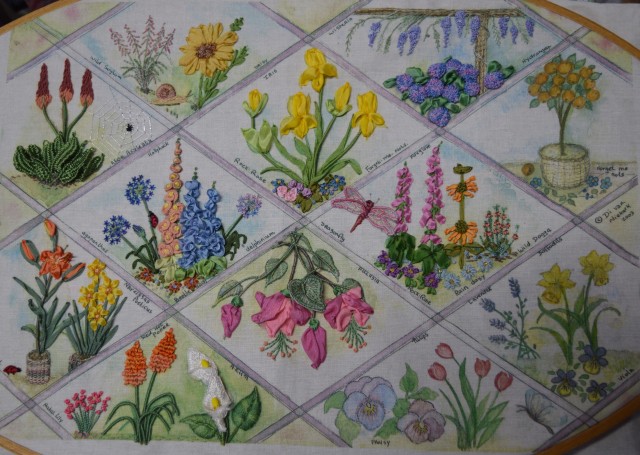 I also started another stitch-a-long, this time with Faby Reilly, we’re stitching a Lizzie Stitching Wallet, I’m planning to use it for my embroidery needles and scissors when I go to my Embroiderers Guild meetings. Over the summer we’ve stitched the outside and now we’re stitching the inside, it’s looking really pretty, decorated with lisianthus and hydrangeas. Faby releases a new section every one or two weeks. 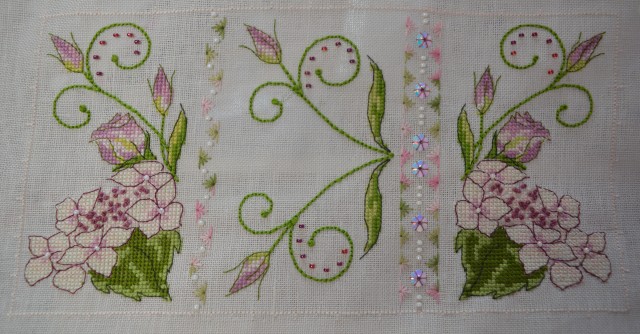 As if I didn’t have enough projects I’ve also started a fabric stitch book, I started it as something I could pick up and put down, a portable project. In reality it often isn’t as I’m basing it on TAST on Pintangle where Sharon has a list of 100 stitches, she’s been releasing one a week but I’ve come in at the end, which means I can do a page on each group of stitches. I find I often need to be by my computer for the instructions! She’s started a new facebook page on Fabric Books which has whetted my appetite to do some other books. In the meantime I’ve stitched two double page spreads… 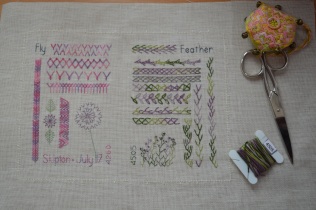 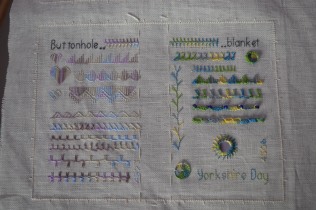 Over the summer I was also working on my entry for the Travelling Sketchbook, I stitched a little hardanger sampler with bilberries on, finished a silk ribbon poppy and embroidered entries for my Embroiderers Guild sketchbooks. 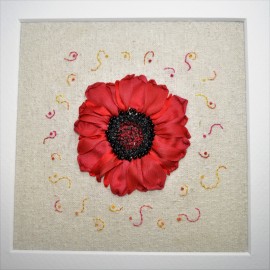 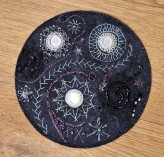 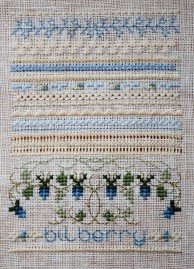 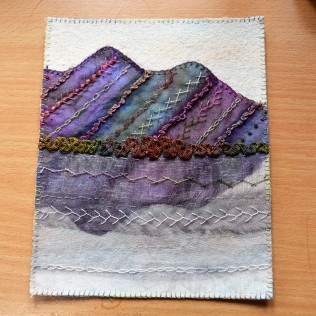 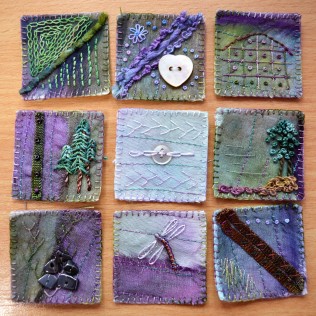 I have managed to do a little dressmaking as well, not as much as I wanted but I did finally manage to make a pair of trousers, a pair of Ultimate Trousers no less and they have been a great success, they are so comfy to wear and have been greatly admired as well! 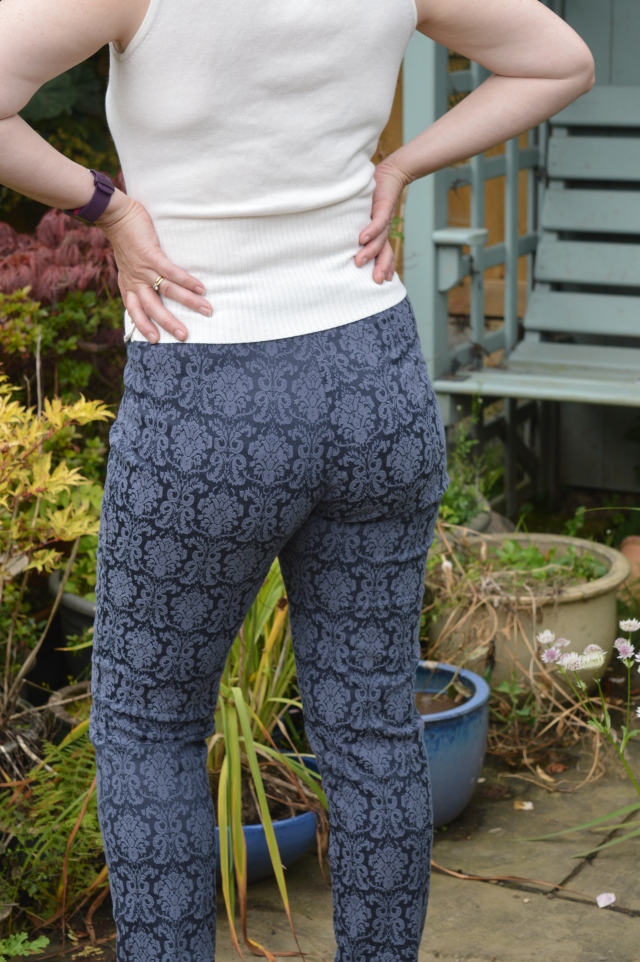 The dress of the summer was definitely my shirt-waister with the red flowers on which I made over Easter, I’ve worn it so many times and still feel special in it. I liked it so much I made another with the same pattern, this time using a silk/cotton mix which feels wonderful on. I still haven’t managed to find the perfect belt for it but I did manage to improve on the buttons with some mussel shell buttons from Duttons, they’re really light and thin with a lovely sheen in inky blue colours. 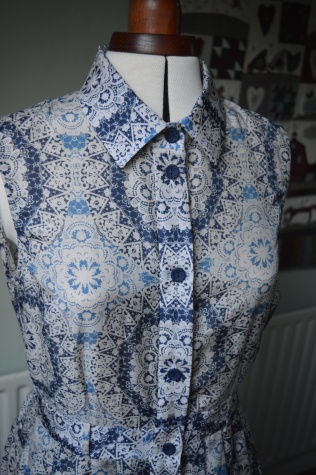 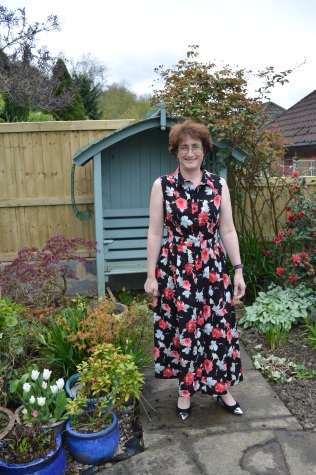 It was May when I last did my stash report! I have managed to use more than I bought, so it’s still going down, albeit rather slowly! I’ve only succumbed to one length of fabric ( I don’t count quilting stuff so I can still get my fabric fix!) I went to the Northern Quilt Festival with my Mum last weekend and I fell for a jacket length, well I think officially it might be curtain weight fabric, but I think it will make a gorgeous autumn jacket! It’s linen / cotton mix so it’s washable, myself and a lady next to me were oohing over it, she was making curtains, but when I said I was thinking of a coat I think she was very tempted!! I’m thinking of another Coatigan…

Total at end of summer 52 lengths!!

I live in a busy market town in Yorkshire with my husband, kids, dogs and chickens. I love trying new crafts, rediscovering old ones, gardening, walking...anything creative really I started this blog after my New Year resolution worked so well. My resolution (the first one I've ever kept!) was to post a photograph of my garden on Facebook every day. My hope was that I would then see what was good in the garden and not just weeds and work, which was my tendency. The unexpected side-effect was that I have enjoyed many more hours in the garden. I am hoping that 'The Crafty Creek' will have the same effect. Happy creating!
View all posts by craftycreeky →
This entry was posted in Down The Rabbit Hole, Dressmaking, embroidery, Serendipity and tagged Dressmaking, embroidery, Quilting. Bookmark the permalink.