Well the second episode of The Great British Sewing Bee was all about children’s clothes.

The first challenge was to make a babygrow, so not only were they being tested on sewing jersey, they also had to sew a perfect gusset and poppers! Shall we say some gussets were more perfect than others! One contestant was asked if she had made babygrows before, her response was great, there’s no point as…

The main challenge which they can practice before hand was to make a children’s cape from wool, there were some lovely ones, including a gorgeous red one and a great one for a little boy that was Sherlock Holmes style, beautifully made. I never made a cape for my daughter but years ago I did sew myself an evening cape from midnight blue velvet with a turquoise satin lining. It was commonly referred to as my Scottish Widows cape after an advert on TV at the time! I remember vividly the problems I had trying to sew velvet to satin! I still wear it occasionally for black tie events.

I’ve made lots of children’s clothes over the years but my children are all grown up now so I haven’t got any little children to sew for. I used to love making pretty little dresses for Helen, this is a smocked one from when she was about two.

Luckily when planning the Little Sewing Bee challenge I did give myself the option of making something from one of the books…phew!

In last years GBSB book there is a pattern for a sleeveless shell top which is a simple cotton top, I decided to make the hack version which has a button fastening down the back. The patterns are all included with the book, you just have to trace them off, Burda style. The fabric I chose is a fine cotton lawn with a delicate flower design, it feels like Liberty tana lawn but there is nothing written on the selvage.

It’s a very simple top, the seams are all stitched with french seams, I added some light weight interfacing to the button plackets just to support it a bit.

In the hack version the neck and sleeve edges are finished with bias binding. I thought it might be perfect opportunity to try out a new toy, a bias binding maker…well I think it needs a bit more practice! I cut the bias strips to the width stated on the packet, put it through the contraption and ironed it as it came out, but it came out like a dogs dinner so I gave up and turned it under as I stitched it on.

I cut it out last night and stitched it this afternoon, adding the buttons after tea, you can’t get much easier than that! It’s a very comfortable top to wear and as a bonus I don’t need to undo the buttons to get it on and off, I think it will be well worn this summer, if we get the sunshine! 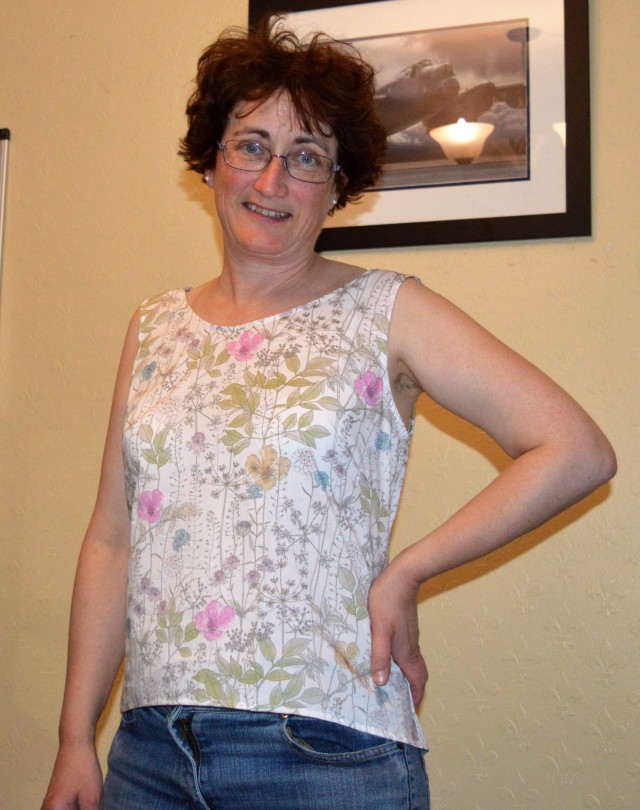 I live in a busy market town in Yorkshire with my husband, kids, dogs and chickens. I love trying new crafts, rediscovering old ones, gardening, walking...anything creative really I started this blog after my New Year resolution worked so well. My resolution (the first one I've ever kept!) was to post a photograph of my garden on Facebook every day. My hope was that I would then see what was good in the garden and not just weeds and work, which was my tendency. The unexpected side-effect was that I have enjoyed many more hours in the garden. I am hoping that 'The Crafty Creek' will have the same effect. Happy creating!
View all posts by craftycreeky →
This entry was posted in Dressmaking, Serendipity, Sewing and tagged Great British Sewing Bee, sewing, Shell Top. Bookmark the permalink.