I finally got round to sorting out my photos from our ‘big adventure’, our long distance walk, so I thought I would share some with you.

My friend and I try to do a long distance walk each year, we do lots of practice walks in the preceding months to get our fitness up (in theory!) and then complete the walk over about a week. Sometimes with the longer walks we would start the walk on day trips from home over the preceding month to cut down hotel time. There’s lots of official long-distance walks around the UK, there’s quite a few here in Yorkshire, so far we’ve done…

This year we went a little further afield to Border country, the bottom end of Scotland and Northumberland. It’s beautiful countryside round there but not an area either of us knew particularly well. We decided to walk St Cuthbert’s Way.

Cuthbert was born in AD634, at 16 he became a novice monk at Old Melrose in Scotland, within 10 years he was it’s Prior. Melrose was linked to the Priory on Lindisfarne, an island just off the Northumberland coast so eventually Cuthbert became Bishop of Lindisfarne. After he died his body seems to have been carried round the country as areas became unsafe. At one point it rested in a cave, now known as St Cuthberts Cave. This walk links all the places, starting at Melrose Abbey, walking past St Cuthberts Cave, to the Holy Island of Lindisfarne.

The first day involved climbing over the Eildon Hills, amazing views from the top, but for days when we looked back we could still see those hills! Typically I started with a heavy cold too!

We also walked for several miles along Dere Street which is an ancient Roman road, just a track now but as straight as a die as Roman roads always are. I really felt we were walking in the footsteps of history. 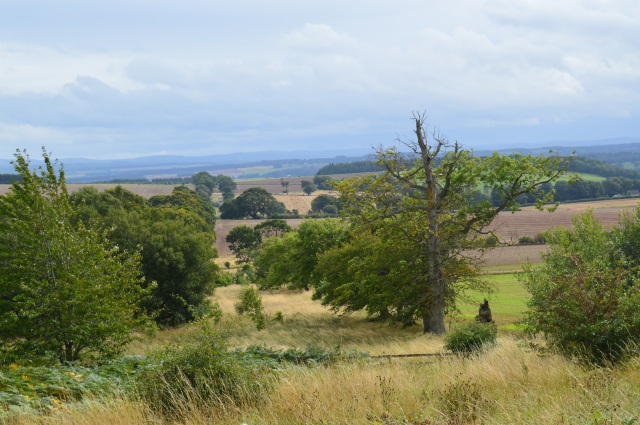 We walked through some ancient woodland too with huge oak trees…

Day four was our second big hill, called Wideopen Hill, it’s the highest point of the walk, the views were amazing. I took a video, I’ve put it on YouTube so I can share it with you, it’s very windy and a bit wobbly but hopefully the link works OK…

The views were amazing, I find it just as beautiful when the rain comes across…

and then five minutes later you get the rainbows! 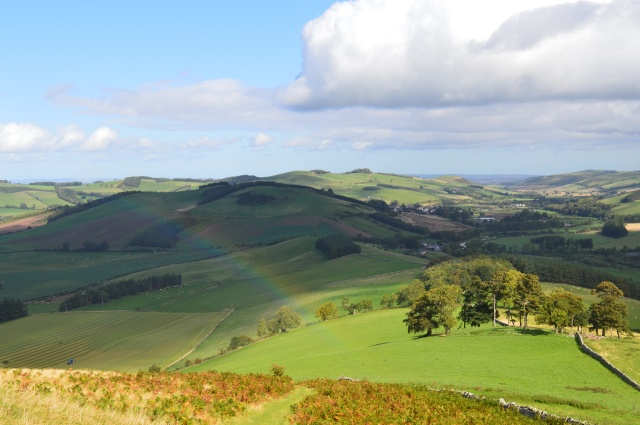 That night we stayed in Morebattle, I loved the names of the streets there! Wouldn’t you just love that address!

We found St Cuthberts Way to be a very friendly and sociable walk, more so than any of the other walks, perhaps because there aren’t many tourists up there the locals seemed to go out of their way to be friendly. There aren’t that many options on places to stay on the walk so we also met up with the same walkers several times. At the pub in Morebattle there were three pairs of walkers staying and eating in the restaurant at the same time, we swopped stories and we did laugh that we’d all got slightly lost at the same point! Another diner suggested an Italian restaurant when we got to Wooler and two nights later we were all in the same Italian, together with another chap we met along the way!

From Morebattle it was a fairly easy walk to Kirk Yetholm, which is also the start of the Pennine Way (268 miles across the Pennines!)

Day Six was always going to be our toughest day, it was 13 miles, which is our upper limit, involved two hills and even the book said it was the hardest day!! We trotted up the first hill, no problem, crossed the border between Scotland and England…

We made it up the second hill, still looking good! We had planned to have our sandwiches on the top of the second hill (we do tend to graze all day, sausage roll break, banana break, coffee break, sticky bun break…and the official ‘lunch break’!!) As we reached the top we met another walker who was a bit younger and a lot fitter than us, he was aiming to do 20 miles a day! We got chatting and he decided to walk with us for a while, a bit of company. I was in front so I was pace-setting, but with someone else in the party you do tend to go just that little bit quicker. We fair yomped across the miles of moors on top. To be fair too it was pretty marshy so there really wasn’t anywhere obvious to stop for lunch.

As we came off the moors I spotted a pile of rocks, lunch! Our fellow walker carried on as we sat down for about 20 minutes to eat our sandwiches. And then we stood up!!!…

I have never crashed quite so much as I did at that point, my legs hurt, my feet hurt, my hips hurt, everything hurt!! I absolutely met my Waterloo with about three miles still to walk! Without my friend encouraging me and keeping me going I don’t know how I would have got to the hotel in Wooler, I was fighting back the tears as it was. We were staying that night in a Christian retreat / B&B, the owner was lovely and brought tea and homemade cakes to the lounge for us and sat and chatted with us, but all I could think of was the bath upstairs I wanted to soak in!! When we checked my friends fitbit we had actually walked about 17 miles!

Luckily the next day was much easier walking, still about 10-12 miles but manageable.

We had our lunch at St Cuthberts Cave where I spotted some very old graffiti inside!

We were just nearing the end when I saw a figure ahead on the path, my OH had come to pick us up and had walked a little way along the path, it was a lovely moment when I realised who it was!

Our husbands came up to join us for the last two nights, it helped us with getting on and off Lindisfarne and also gave us a good excuse to stay in a very nice, comfortable hotel. It was one of those with homemade biscuits in the room, complimentary mead, homemade jams etc and a HUGE rolltop bath I could soak in!

The final days walk was about six miles across to Lindisfarne. Lindisfarne is joined to the mainland by a causeway which is only crossable at low tide, this is one reason why husbands were needed to ensure we could get off the island afterwards. The crossing times are published on the internet and that day we had from about 10.30 to about 3.45. Good crossing times really.

We walked the first three miles and arrived at the causeway just as it opened. There is also a ‘Pilgrim’s Crossing’ which entails walking across the wet sands, following a line of poles to the island. It would have been nice to do in the summer, but the water can be knee deep, cold and walking on sand isn’t easy, none of which is great if you have no balance like me – so we chickened out and took the road round. The views across the sands to Bamburgh Castle were stunning, we could also hear a colony of seals barking in the distance.

Arriving on Lindisfarne was a weird experience, we both felt quite overwhelmed by all the tourists, too much noise and bustle, it was only then that we realised just how much solitude and quietness we had enjoyed for the previous week. 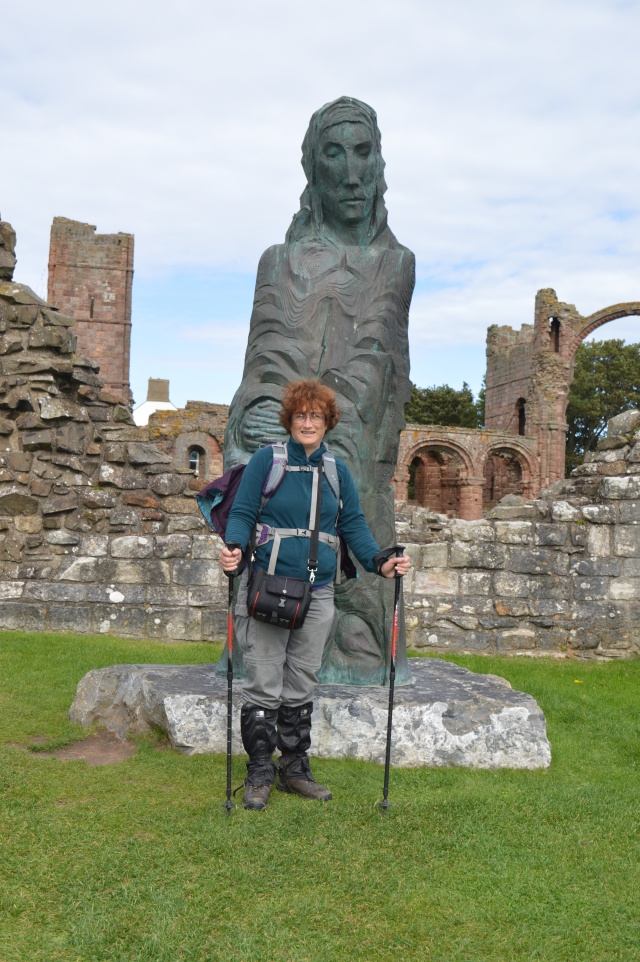 The walk ends at St Cuthberts Priory, we had our celebratory photos taken by his statue, my OH took a comical photo of us trying to do a selfie!

We then enjoyed lunch in a cafe with our OH’s. They had driven on the island in the morning so we had time for a little wander before we set off back to the hotel. There are lots of warning signs as you drive along the causeway to turn back if the sea has reached a certain point, there’s even a refuge half way along, a rickety wooden shed on stilts which I really wouldn’t want to spend the night in. Despite all the signs, that night someone thought they could beat the tide and had to be rescued by the Lifeboats! 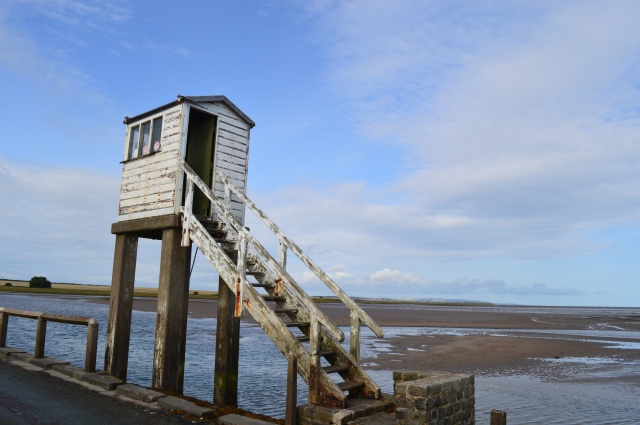 Altogether we walked about 70 miles over the week, with walks varying from 7 miles to 17! It was a wonderful walk, very friendly with beautiful scenery and lots of peace and quiet!

I live in a busy market town in Yorkshire with my husband, kids, dogs and chickens. I love trying new crafts, rediscovering old ones, gardening, walking...anything creative really I started this blog after my New Year resolution worked so well. My resolution (the first one I've ever kept!) was to post a photograph of my garden on Facebook every day. My hope was that I would then see what was good in the garden and not just weeds and work, which was my tendency. The unexpected side-effect was that I have enjoyed many more hours in the garden. I am hoping that 'The Crafty Creek' will have the same effect. Happy creating!
View all posts by craftycreeky →
This entry was posted in Serendipity, Walking and tagged Lindisfarne, Melrose, St Cuthberts Way, Walking. Bookmark the permalink.