A Pair of Smalls

I’m still waiting for my border material to arrive for the hummingbird quilt, I’m not very impressed as it is now apparently on it’s way from Malvern Quilt Festival to Duxford Quilt Festival, I may get it some time next week if I’m lucky!

I’m using the wait to try and finish off and catch up with a few other projects, I do seem to have rather a lot on the go at the moment!

Yesterday I was visiting my mum, doing a bit of stitching and I managed to finish the September cross-stitch from the Snowflower Diaries Joyful Word SAL, I’m somewhat behind on this one!

I went home, retrieved August from my ‘Waiting to be finished off’ box and made them both up into mini cushions.

August is a cute design with a border collie, I love the way his ears are half cocked. The flowers are stitched in lazy-daisy, they are meant to be hydrangeas, I love the variation from cross-stitch. I backed it with a really pretty blue floral cotton, I’ve had it for years, it’s one of those that is so pretty I haven’t used it…until now! I made the cord with my Clover cordmaker using double lengths of DMC thread, I didn’t quite make it long enough, I haven’t quite mastered calculating how much I need, so this one has only got a short loop.

I think September was one of the first ones I noticed on Pinterest, it has two beautiful barn owls. I’ve only seen barn owls a couple of times but it is a magical experience, they are stunning birds. The back for this one is one that came out of my mum’s stash, I think it’s meant to be a bit like a traditional book cover inside paper, but I think it could also look like plummage!

With three months left to make I’m giving this project a bit of a holiday until after Christmas. I decided this last week as I want to do some Christmas stitching, then Faby Reilly’s latest stitch-a-long popped up. I saw this a few weeks ago when Faby first announced it, it’s a Christmas stitch-a-long to make four cross-stitch Christmas card designs. I resisted with the argument that I didn’t want to make four cards. I’ve made several of Faby’s designs over the last couple of years and they are always gorgeous… 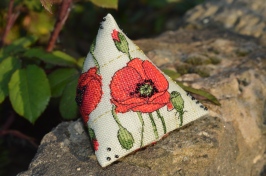 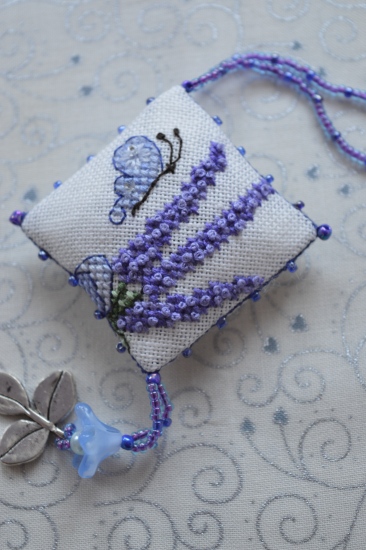 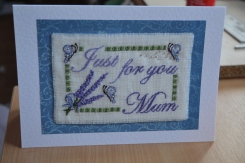 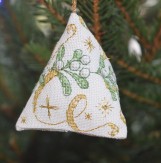 A couple of days ago the stitch-a-long started so the first design popped up and it was so pretty I succumbed immediately 🙂 I’ve decided however that I’m going to make them into little Christmas tree decorations. I might change the colour scheme too as although I think the subtle colours Faby has chosen are very elegant, I’m a traditionalist at Christmas, I like red and green.

I’d better get stitching as it’s not long to Christmas and Faby is releasing a new design every two weeks. If anyone fancies joining the Christie stitch-a-long just follow the link to Faby’s website.

I live in a busy market town in Yorkshire with my husband, kids, dogs and chickens. I love trying new crafts, rediscovering old ones, gardening, walking...anything creative really I started this blog after my New Year resolution worked so well. My resolution (the first one I've ever kept!) was to post a photograph of my garden on Facebook every day. My hope was that I would then see what was good in the garden and not just weeds and work, which was my tendency. The unexpected side-effect was that I have enjoyed many more hours in the garden. I am hoping that 'The Crafty Creek' will have the same effect. Happy creating!
View all posts by craftycreeky →
This entry was posted in Crafts, embroidery, Serendipity, Stitch-a-long and tagged #christiesal, Christmas Decoration, cross-stitch, Faby Reilly Designs, Joyful World SAL, The Snowflower Diaries. Bookmark the permalink.

16 Responses to A Pair of Smalls