Monday’s Meander Round the Garden.

Posted on September 24, 2018 by craftycreeky

I’ve spent a fair bit of time in the garden over the last couple of days, mainly weeding with a bit of moving and tidying up too. We’ve had some nice sunny autumn days this week.

I’ve been trying to sort out the area of the patio right next to the conservatory. It’s always been a difficult area to plant as the soil level is only about 6″ below the window sill, whereas floor level is probably another 2′ lower, so the usual back of the border plants are out as they block out too much light from the conservatory. Equally we want the bed to look good from inside (the back) as well as from the patio.

I saw a lovely display at the Harrogate show last spring which was all soft blues and whites, using quite a few herbs too. Whilst I’m not going to stick to blue and white I rather fancy a quiet, peaceful bed here. I’ve already planted a creamy broom, some erysimums in mauve and cream and a purple sage. I’ve moved the shaggy astrantias to the top as they were just taking over and I’ve also moved a crocosmia that got forgotten in the move back to the Amber & Amethyst garden. 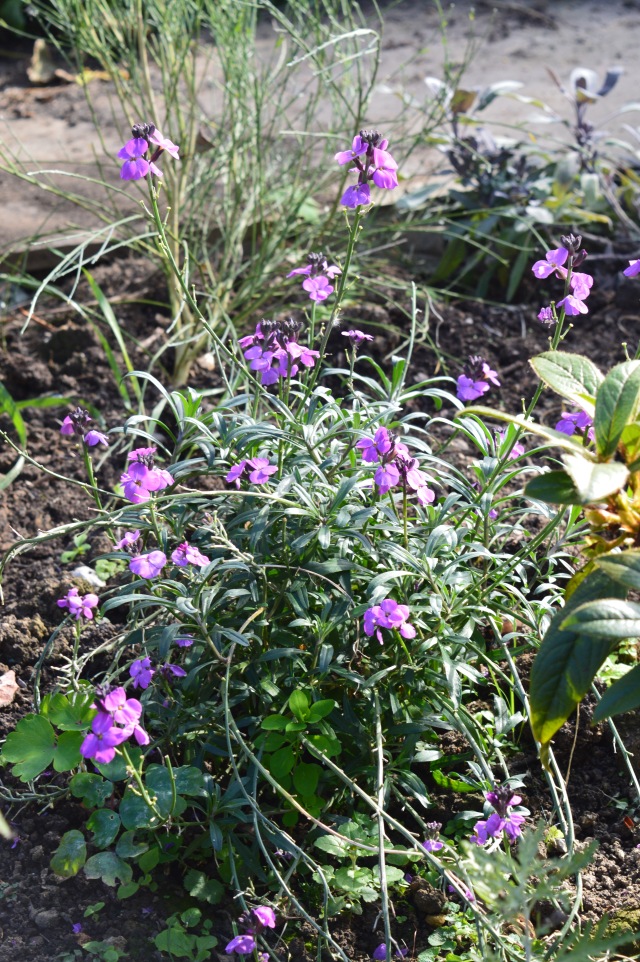 I’ve just ordered some roses from David Austin, I do like his roses and a voucher came through for 15% off! I’ve been wanting to put a standard rose near the arch for a while, last year they had sold out of the ones I was interested by the time I got round to ordering but it did give me chance to really decide which one would be best. I’ve plumped for ‘Claire Austin’ which has creamy white blooms and a strong fragrance. I’ve also ordered two low growing roses for in front of the conservatory, a pretty pale pink onecalled The Fairy and a ground cover rose called Marie Pavie which is a very delicate blush pink. These are all bare rooted roses so they won’t come til November, bare rooted are a little bit cheaper and they settle in a lot better than pot grown.

Looking round the pots in the patio, the fatsia Japonica I planted in a big pot in a totally shady area is looking happy, though it’s been nibbled by something, ironically the hosta in the pot next to it has hardly been touched!

In the raised bed by the arch the spirea japonica is adding a subtle hint of autumn colour.

Hostas fare better in some areas of my garden than in others, the ones down by the steps are always the first to be eaten, they clearly hide a lot of slugs! In contrast up by the pond they fare much better, I presume there’s enough toads, frogs and newts in the pond to keep them under control, though we rarely see them. The creamy white one is still looking pretty much perfect, it’s stunning, it’s even still got a couple of flower spikes! It must be one of those that slugs don’t like, I wish I could remember it’s name and I’d buy another one! The other hostas around it are looking a bit tatty, I think I’ll have to start tidying up there soon. 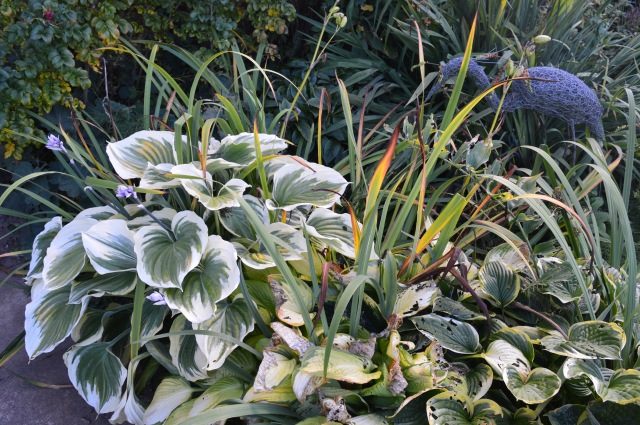 I did lots of weeding by the big fence this afternoon, it’s sort of satisfying but disheartening at the same time digging up bindweed roots! I put a thick mulch of compost down in the spring, so we’ve had the usual flush of annual weeds, but also the bindweed roots tend to spread in the soil of least resistance, so they are easier to pull up in the compost, rather than my heavy clay soil underneath. I’ve ordered one large rose for this area as there’s quite a big area to fill and a tall fence to cover too. I’ve order Mme. Pierre Ogen which has beautiful silvery pink flowers, a strong scent and it grows to about 6′!! That’ll cover a bit of fence!

I just need to keep going with the weeding and tidying up for the next few months!

I live in a busy market town in Yorkshire with my husband, kids, dogs and chickens. I love trying new crafts, rediscovering old ones, gardening, walking...anything creative really I started this blog after my New Year resolution worked so well. My resolution (the first one I've ever kept!) was to post a photograph of my garden on Facebook every day. My hope was that I would then see what was good in the garden and not just weeds and work, which was my tendency. The unexpected side-effect was that I have enjoyed many more hours in the garden. I am hoping that 'The Crafty Creek' will have the same effect. Happy creating!
View all posts by craftycreeky →
This entry was posted in Garden, Serendipity and tagged autumn garden tidy-up, Bindweed, David Austin Roses. Bookmark the permalink.

15 Responses to Monday’s Meander Round the Garden.