I’m still on catch up with my posts…

Last month Ali AKA Thimberlina, organised another Sew Dewsbury, it must be about the fourth or fifth meet up she has arranged. Sew Dewsbury is lovely because it’s small and personal, some of the bigger meet-ups you can feel a bit lost if you don’t know anyone, not in Dewsbury!

Dewsbury is south of Leeds, it’s an old textile town and there are still good fabric shops there. I really ought to go to Dewsbury more often as on two trains it doesn’t take that long. I suppose my problem is I rarely go fabric shopping for a specific project, I’m an impulse buyer! I decided on the train on the way over that I wouldn’t go mad, I would be controlled, maybe one or two lengths…well that didn’t work out did it!

We met in Wetherspoons, on a very rough estimate there was probably about two dozen of us. A special treat was meeting Sheila from Sewchet, she’d come up from Somerset for the weekend, staying with Ali, having followed each others blogs for ages it was great to meet in person. We had a great time chatting as we went round the shops.

Our first call was Fabworks, this is the biggest fabric shop in Dewsbury, they have a great range, Liberty, Avoca, cottons, wools, linens, jersey, curtaining…and leather pieces, I’ve never particularly looked at leather before but I started rummaging in the remnant bin (I blame Sheila for this one 🙂 )and ended up buying three or four small pieces. It’s sold by weight here, I seem to remember it cost me about £4.

Fabworks also had some 1.5m lengths of denim, various shades, for £5, I bought three different lots for jeans and denim skirts, for £5 a length it didn’t matter if it didn’t work out! I also found two potential trouser lengths…

In Lucky Fashions I fell for an acid print cotton in pink with dragon flies on. I bought two lengths of this fabric last time in white and teal, I made one into a dress for the summer and it was lovely to wear, so I’m going to have a pink dress this time! 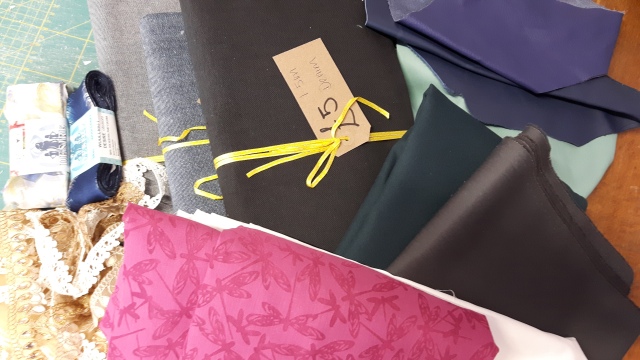 In the Pound a Yard shop (It isn’t anymore, but it’s still cheap!) I spotted some cotton lawn which is meant to be Liberty’s, just a plain white/ivory lawn, perfect for a shirt. I’m not sure if it is Liberty’s or not, but it’s very nice.

Our next port of call was the Creative Craft Centre, they were having a shop birthday, so cakes and refreshments, tombolas and raffles were the order of the day. I won a crochet kit and bought some pretty tulle ribbon which can be knitted into a scarf or a frill.

Our final shopping stop was Dewsbury market, I found the haberdashery stalls and bought some very pretty lace and trims, but missed the Liberty stall!

We all met together again at Wetherspoons, see what everyone else had bought, what bargains we had missed!! I had a lesson in Instagram too, still not really got the hang of it but I do keep posting now @thecraftycreek. I think half the problem is that I’m not a mobile orientated person at all, I can go days without checking my phone, much to the annoyance of my kids! So at the moment if I’m out and about I tend to post on Instagram, whereas at home I tend to write a post here.

Some good news I heard yesterday…I was very sad over the summer to hear that the Sheffield cutlers, Ernest Wright and Son had closed down. They were one of very few traditional scissor makers left in Yorkshire, Sheffield has a very long history is steel and cutlery. There was a beautiful post written by Did You Make That which really captured the traditional company that was being lost. I was very pleased that I had received as presents a pair of their dressmaking scissors and their traditional embroidery scissors, proud to own scissors made in Yorkshire. 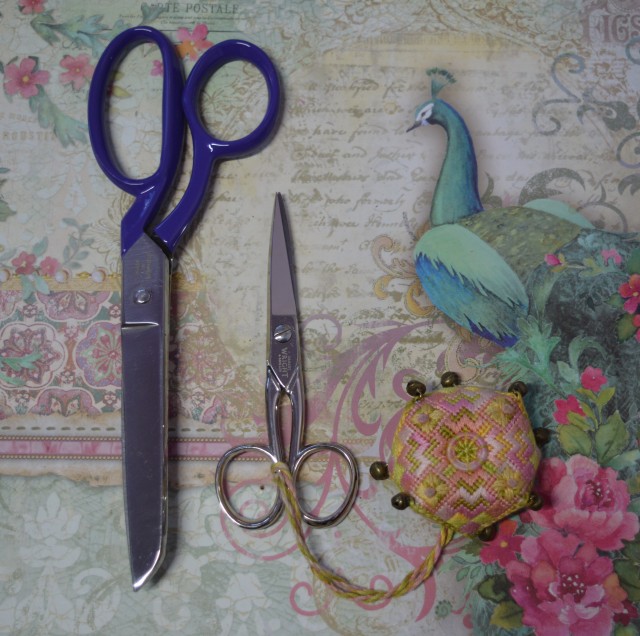 We are writing a new chapter in the history of the Ernest Wright quality scissors.

All assets including the Ernest Wright and Kutrite brand names, the original machinery, tools and stock have been bought from the Receiver. The original personnel have been offered their jobs back and the old factory and workshop have been leased again from the landlord.

“We are but the two halves of a pair of scissors, when apart… but together we are something”

We will be back soon!

Great news indeed, I might just have to buy myself a new pair to celebrate as soon as they open again 🙂

I live in a busy market town in Yorkshire with my husband, kids, dogs and chickens. I love trying new crafts, rediscovering old ones, gardening, walking...anything creative really I started this blog after my New Year resolution worked so well. My resolution (the first one I've ever kept!) was to post a photograph of my garden on Facebook every day. My hope was that I would then see what was good in the garden and not just weeds and work, which was my tendency. The unexpected side-effect was that I have enjoyed many more hours in the garden. I am hoping that 'The Crafty Creek' will have the same effect. Happy creating!
View all posts by craftycreeky →
This entry was posted in Fabric shops, Serendipity and tagged Ernest Wright & Sons, Fabric Shopping in Yorkshire, Sew Dewsbury. Bookmark the permalink.

8 Responses to Fabric Shopping with Friends