I’ve just finished another two blocks for my Splendid Sampler 2 quilt, the patterns are being released every Thursday on Pat Sloan’s web site, I’d only just finished stitching last weeks on Thursday afternoon so I carry straight on and pieced this weeks pattern too. I’d sashed and quilted them both by this afternoon.

Last weeks block is a cutie, it’s by Wenche Wolff Hatling, it’s called Balance and it’s all about finding balance in your life; ‘balance between time for others and time for yourself…it’s time to breathe – and let your feet find safe ground’ 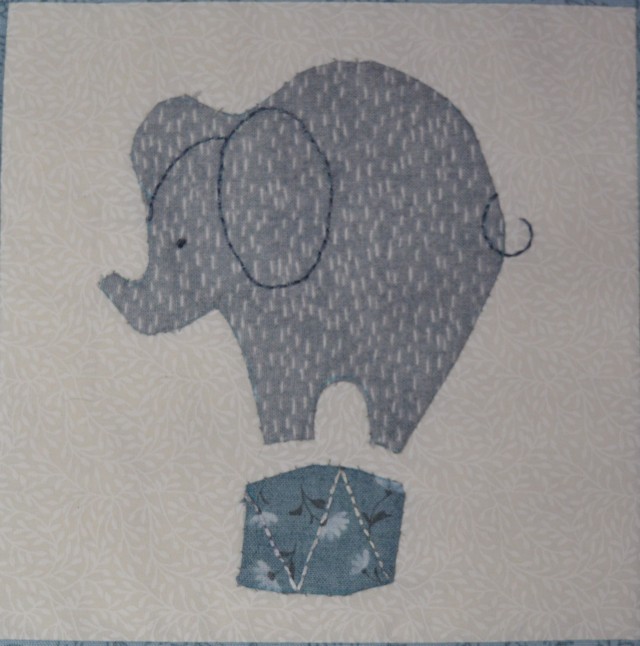 Isn’t it sweet!! It’s a vintage style elephant, I managed to needle-turn applique both the elephant and the stand, although the stand was meant to be in two colours with a zig-zag design, I know my limitations and there is no way I would get such acute triangles neat enough. I decided to do one colour block for the stand and embroider the zig-zag on it. As the details on the elephant are also embroidered it didn’t look too out of place.

Having sashed it in blue I decided to quilt it with a meandering clover design. I just used cream this time (all the others I quilted with a variegated light grey) as I didn’t want it to detract from the elephant. I stitched in the ditch around the elephant which just lifts it nicely.

This weeks block is a straight forward pieced one, so it didn’t take too long. Though I did learn the hard way that it’s blocks that you think are easier that you make mistakes on, probably because I wasn’t concentrating as much!!

This block is by Susan Ache, it’s called ‘Points Taken’, I love the idea that we spend ages as quilters worrying about our points, trying to get perfect points. This star deliberately has them all missed off! 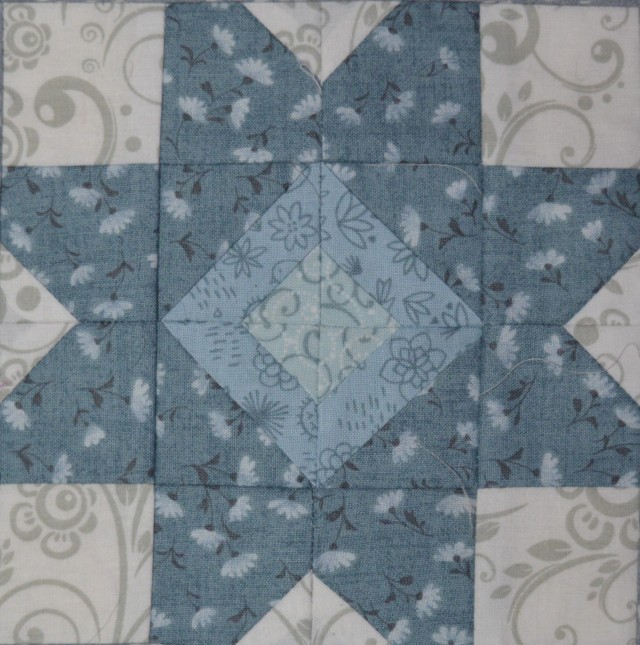 I’d forgotten just how small some of the squares are with the SS quilts, cutting 1.25″ squares, I need to get some more Best Press to help control them! I made the centre blocks first, I was just about to sew them together when I realised I’d done one the wrong way, so I now have a spare!

I like this block, and my points worked out pretty well!

My original thought was to quilt this one in the ditch, but I decided to be brave with my fmq again. I quilted the star with a flame shape going up into each corner. I got a bit carried away when I thought I’d nearly finished and stitched one that filled an area for two, so I squeezed another smaller one in next to it! 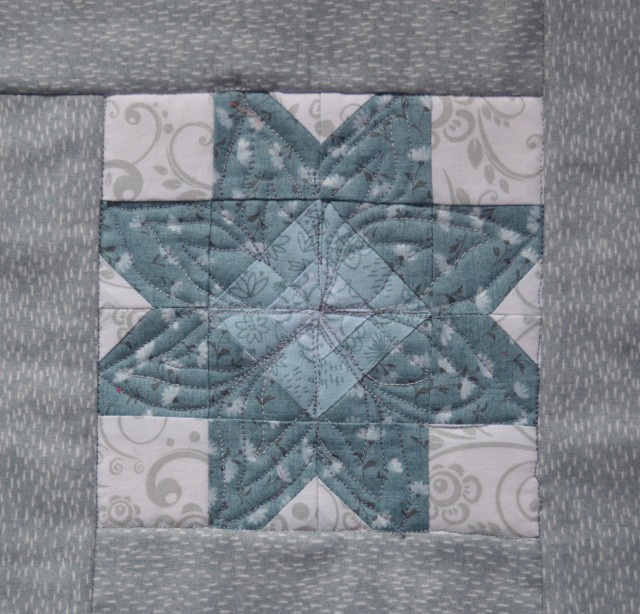 I live in a busy market town in Yorkshire with my husband, kids, dogs and chickens. I love trying new crafts, rediscovering old ones, gardening, walking...anything creative really I started this blog after my New Year resolution worked so well. My resolution (the first one I've ever kept!) was to post a photograph of my garden on Facebook every day. My hope was that I would then see what was good in the garden and not just weeds and work, which was my tendency. The unexpected side-effect was that I have enjoyed many more hours in the garden. I am hoping that 'The Crafty Creek' will have the same effect. Happy creating!
View all posts by craftycreeky →
This entry was posted in Serendipity. Bookmark the permalink.

8 Responses to Balancing the Splendid Sampler 2