Our heatwave continues here in in Yorkshire, I think the last time we had any rain was in May, I don’t think it will be long before we have a hosepipe ban, whilst I appreciate the need to conserve water I do worry about all the plants I’ve bought this year!

I was getting a bit behind in the garden too as it was just too hot for me during the day, however I’ve recently discovered a perfect time for gardening in hot weather – my mum’s dog, Lucy, has an annoying habit of waking up to go out at 05.30 and as she is not very reliable in the bladder region, we can’t ignore her. It’s even more annoying as the alarm goes off at 6am, just 30 minutes more… I noticed the other morning how lovely it was outside, so by 6.30am I was weeding in the garden! I lasted until about 10am when it started to get too hot. So that is my pattern now on a day off!

Rosie found a cool spot to have an afternoon snooze…

The astrantia round the patio have gone a bit mad this year, I moved at least one but I still seem to have three big plants, they’re the pale ones too, not the most exciting and they’re starting to smother other plants, so I think come the autumn I’ll move them all up to the old chicken run, have an astrantia border under the old roses!

There’s a beautiful veronica just come into flower in the AA garden, it’s an intense, deep blue. I’ve a few veronicas around the garden of various sizes ut this is the first one to flower this year. They’ve started self seeding round the garden too which is always a nice surprise. I think it looks lovely next to the gold leaf of the pieris…and yes, that’s another astrantia in the background ready for moving in the autumn!

The AA garden is filling out nicely, it looks particularly nice as you walk up the steps and see it at eye level.

I think the weed killer is working in the gravel, the marestail is looking pretty miserable! I’ve had success with the bindweed too! I still seem to have an evergrowing repetoire of weeds though!

We’ve also got lots of self seeded poppies. Last year when I was clearing the area I made an effort to allow these lovely purple poppies to set their seed and to help them spread it. They are a lovely delicate shade of mauve, each one subtly different. 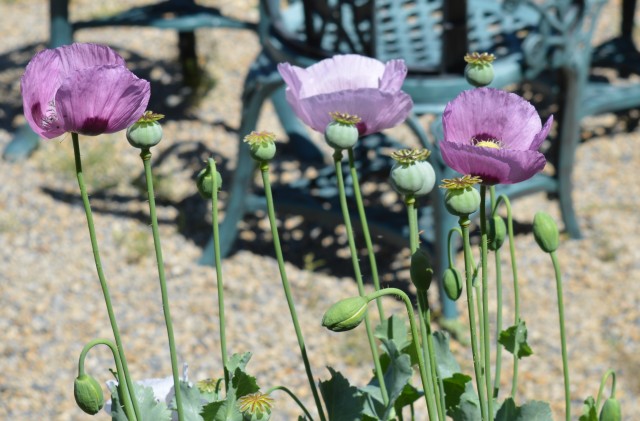 We’ve got a huge patch by the compost heap too, just waiting for those to flower.

The geraniums are all in flower, I love the way they mingle with everything, they are very sociable plants. However the pink one (Ann Folkard I think) is getting a bit big for her boots, I let her off a lot as she is in such an awful patch of clay, but I’ve just had to scoop her up and prop up the sides as we were having difficulty opening the gate! I noticed today that the stems which have trailed into the shade of the magnolia tree are a much darker magenta, which looks lovely next to the lime green of the spirea next door.

The black sambuscus is much bigger this year, I usually prune it hard but I wanted it a bit bigger to help cover the fence. We’ve been rewarded with a blackbirds nest! We noticed the pair of blackbirds were flying to the bush a lot and today whilst we were having coffee we heard lots of little cheaps as one of them took a worm in!

We’ve no rain forecast for at least another couple of weeks, so fingers crossed everything survives!

I live in a busy market town in Yorkshire with my husband, kids, dogs and chickens. I love trying new crafts, rediscovering old ones, gardening, walking...anything creative really I started this blog after my New Year resolution worked so well. My resolution (the first one I've ever kept!) was to post a photograph of my garden on Facebook every day. My hope was that I would then see what was good in the garden and not just weeds and work, which was my tendency. The unexpected side-effect was that I have enjoyed many more hours in the garden. I am hoping that 'The Crafty Creek' will have the same effect. Happy creating!
View all posts by craftycreeky →
This entry was posted in Garden, Serendipity and tagged astrantia, summer gardens, veronica. Bookmark the permalink.

9 Responses to Monday’s Meander Round the Garden