A Pair and a Spare

This post was going to be called a Pair of Smalls, then I found another one, so I have a spare like any good Girl Guide 🙂

I started June on my trip down to London, it’s a really cute one with a bear and a hive of bees. These designs are by Maia Matyas of Snowflower Diaries, they’re a free SAL from 2016 called Joyful World. I think they are cute without being twee!

It amazed me that within probably 20 stitches, you could already tell it was a bear, just by the snout and the position of the eyes. I stitched on the train journeys and a little bit in London. I was even stitching in Kings Cross Station whilst I waited for the platform to be announced!

I didn’t have so much to do when I returned. With the little bees on this design the obvious choice for the backing was my sage green bee fabric, it coordinates beautifully. The cord round the edge is actually one I made for another project but the colours didn’t work, I think it matches pretty well on my bear.

Whilst I was in London I also stitched a little blackwork sheep. This was a practice piece as my Embroiderers Guild are doing a joint project where everyone stitches one square on a blackwork grid. There’s some beautiful blackwork being stitched. We could either do traditional or modern blackwork, but our square was only 25 stitches across. As soon as I saw this sheep on Pinterest I knew he was the one. The name Skipton means sheep town, so I felt we had to have a sheep on there.

I needed a practice because the sheep on the pattern was a bit big, just by a few stitches. So I cut off his tail, put him on a diet and trimmed his legs!!! A bit drastic but it worked! I added some grass to fill the square a little. I think he’s rather cute.

I stitched one on the official piece at my Embroiderers Guild meeting, I didn’t manage to get a photo of it, maybe next time! Last night when I was making June the bear up, I decided to make my little sheep into a mini pillow…and it’s pretty small. I found a grey quilting fabric which toned in nicely as it is actually stitched  on a scrap of very pale blue/grey linen. I found some grey trim in my stash which was just enough.

Yesterday afternoon I was sorting through my mums stuff and I found a box of old cards, in it was a birthday card I made for her over twenty years ago. It’s a rather pretty forget-me-not design. Luckily I had done my usual trick of using sticky tape rather than glue, so it was easy to remove from the card. After that it was a fairly quick job to make it into another pillow. My spare small! 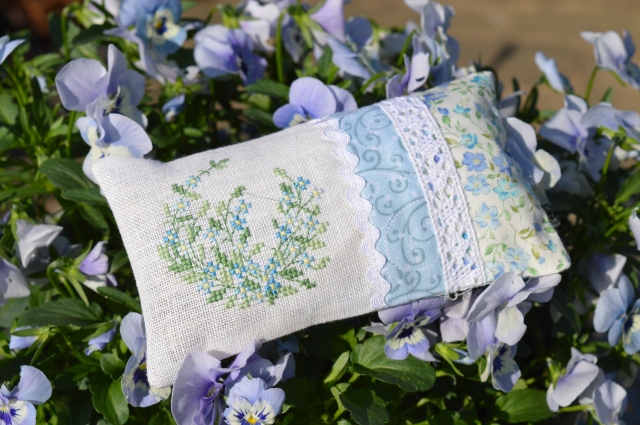 I live in a busy market town in Yorkshire with my husband, kids, dogs and chickens. I love trying new crafts, rediscovering old ones, gardening, walking...anything creative really I started this blog after my New Year resolution worked so well. My resolution (the first one I've ever kept!) was to post a photograph of my garden on Facebook every day. My hope was that I would then see what was good in the garden and not just weeds and work, which was my tendency. The unexpected side-effect was that I have enjoyed many more hours in the garden. I am hoping that 'The Crafty Creek' will have the same effect. Happy creating!
View all posts by craftycreeky →
This entry was posted in Crafts, embroidery, Serendipity and tagged cross-stitch, Cross-stitch smalls, forget-me-nots, Joyful World SAL. Bookmark the permalink.

19 Responses to A Pair and a Spare