Our roses are just starting to bloom at the moment, each bush just has a few open. I was visiting Kew Gardens in London at the weekend and they are clearly at least a couple of weeks ahead of us at least as their roses are in full flower, in fact they need a bit of dead heading! I’ll show you Kew photos another day, in the meantime, this one is called Teasing Georgia, she climbs over the arch by the patio and hopefully meets the clematis going the other way a bit later in the summer.

The candelabra primulas are looking lovely, sitting next to the pond by Hubert the Heron. They’re only visible from the path at the moment as the solomons seal in front of them really need cutting down.

I rather like astrantia, luckily they like my soil too so I’ve got several different colours. I think my favourite is the deep red one, but I also like the lighter one with larger sepals, I’d admired this one in my mums garden a few times and as her house is now on the market I decided to move it! It’s in a pot temporarily until I decided where it’s going to go. It will also have to wait until I buy a new spade as I managed to break mine last week! 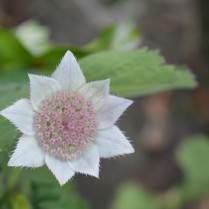 I thought I had a red hot poker about to flower in the Amber & Amethyst garden until my friend wandered round the garden and admired my foxtail lily (eremurus) she was quite jealous as she’s tried to grow one a few times. It’s just started coming into flower and it is a beautiful shade of amber….

I’d still like a red hot poker though, not the bright gaudy ones but the softer coloured varieties.

The geranium at the bottom of the steps has flopped a bit, I think I’m going to have to put a support in somehow. This one is a bit of a giant and can be somewhat thuggish, but the soil is so bad there I can forgive it! I think this variety is called Ann Folkard.

I planted a black sambuscus a few years ago, the foliage is beautiful, I usually give it a hard prune each spring to keep it under control, but as we’ve now got a large expanse of fence to cover I’ve left it this year, so it’s rewarding me with a lovely display of flowers. I think I’m going to have to prune the long over-hanging branches though. The roses on the top of the arbour are also looking pretty, this ones called Gentle Hermione. It looks lovely from Helen’s bedroom window.

The stone owl on the fence usually makes me smile, my OH gave it to me a few years ago for my birthday. Whilst it has always been on display, I never had anywhere up high where he would look his best but also be safe, you really don’t want that falling on your head. As soon as I realised that one of our neighbours fence posts was a few inches lower than the rest I knew where owl was going to go. He looks great up there and if he should fall off in high wind he’s got a soft landing and shouldn’t do any damage either. When I put it up there my OH expressed concern that it might frighten the little birds off, within two minutes of him saying this a sparrow sat on the owls head! Clearly birds are not that easily taken in !

I live in a busy market town in Yorkshire with my husband, kids, dogs and chickens. I love trying new crafts, rediscovering old ones, gardening, walking...anything creative really I started this blog after my New Year resolution worked so well. My resolution (the first one I've ever kept!) was to post a photograph of my garden on Facebook every day. My hope was that I would then see what was good in the garden and not just weeds and work, which was my tendency. The unexpected side-effect was that I have enjoyed many more hours in the garden. I am hoping that 'The Crafty Creek' will have the same effect. Happy creating!
View all posts by craftycreeky →
This entry was posted in Garden, Serendipity and tagged Amber & Amethyst Garden, astrantia, Roses. Bookmark the permalink.

7 Responses to Monday’s Meander Round the Garden