One Stitch at a Time

This is a cross-stitch I started on holiday in March, finished in mid April and it’s been sitting, patiently waiting to be made up ever since. I finally got round to it over the last couple of days. 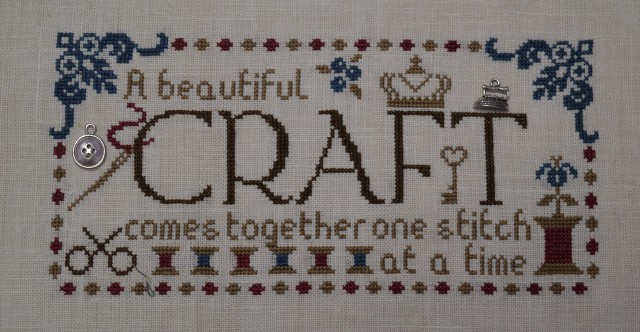 The design is by Rovaris, a designer from Italy who sells on Etsy, the two little charms come with the pattern. The chart was nice and easy to follow and it made up nicely, all I had to do was make it into something!

I decided to double mount it with a blue fabric underneath. I cut some card and laced the cross-stitch round it. I chose some blue quilting cotton that came from my mums, she’d made it into a tablecloth and napkins and I did have an idea of cutting it up to make a quilt as there were lots of different blue prints. That idea has now gone out of the window as I found to my surprise that it has a significant one way stretch! It’s not quilting cotton after all!! I decided to keep going with this particular fabric as I felt it wouldn’t make that much difference, it would be manageable.

I glued the blue to the backing card, trying to have some of the pink pattern round each side. I thought I’d cracked it until I tried the cross-stitch on top, pink pattern on three sides only and it stood out a mile!

I rescued it by using the back instead, which was the side fully covered by fabric. I glued the two sides together and left it overnight with a heavy book on top!

The back is still unfinished, I’m planning to buy some soft blue felt from Cool Crafting next time I’m in Skipton to finish it off. This colour looks fine, but that’s the only piece I have. 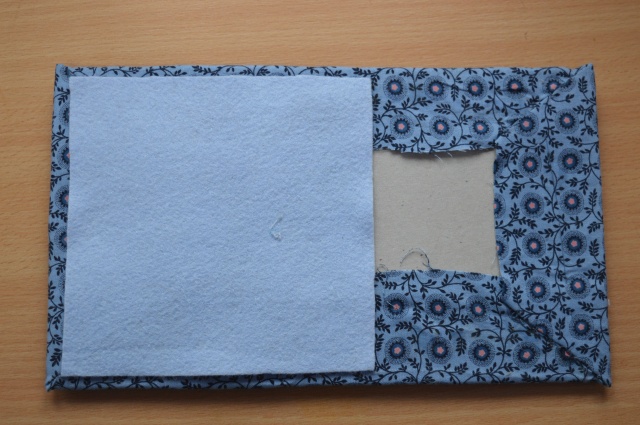 I felt it needed a little trimmimg, I made some cord from three lengths of floss, blue, red and beige, to coordinate with the cross-stitch. It was a long piece to twist, the longest I’ve ever done, the general rule is three times the length of cord you need. Usually I’m stood by the door with it attached to the spool holder of my sewing machine, twisting away. This time I was half way across the landing! I get to get my OH to help with folding it in half!

After all that trouble, it didn’t look right!! The colours just looked too drab. I played around with trims in my stash and found that the soft pink ric-rac looked best. I put a fine line of glue down the edge and eased the trim half under the cross-stitch.

I still needed a hanger, so I used a length of the cord I had made and just hand-stitched it to each corner.

It’s already hanging in my sewing room, though I might leave it under a heavy book for the night as it seems to have developed a slight twirl!

I live in a busy market town in Yorkshire with my husband, kids, dogs and chickens. I love trying new crafts, rediscovering old ones, gardening, walking...anything creative really I started this blog after my New Year resolution worked so well. My resolution (the first one I've ever kept!) was to post a photograph of my garden on Facebook every day. My hope was that I would then see what was good in the garden and not just weeds and work, which was my tendency. The unexpected side-effect was that I have enjoyed many more hours in the garden. I am hoping that 'The Crafty Creek' will have the same effect. Happy creating!
View all posts by craftycreeky →
This entry was posted in embroidery, Serendipity and tagged Craft by Rovaris, cross-stitch. Bookmark the permalink.

12 Responses to One Stitch at a Time