It smells lovely as we open the back door at the moment, a philadelphus is in full flower and the scent fills the air, it’s quite a heady scent, it’s other name is mock orange blossom. This is the golden leafed version, it’s in a shady spot so the leaf colour stays pretty good all season.

The roses are just starting to bloom, there’s lots of buds but just the occasional one open. The gorgeous coppery pink one is called Lady Emma Hamilton, I bought three last year for the AA garden, I often plant three close together to give the impression of one big bush. The little copper one is a rescue from my mums garden, it’s called Port Sunlight which is where she had childhood holidays as family lived there. The rose was still in it’s pot looking decidedly sorry for itself. It’s a patio rose so I’ve planted it at the front of the border on the AA garden. I think the pink one is the Alnwick rose.

Different irises are flowering each week, these ones are from bulbs, rather than corms, I do find them easier to grow! The blue one is gorgeous, it’s a deep blue delicately edged with a thin silver line. There’s a big patch of them surrounding the birdbath on the patio. The yellow one is up by the pond and in the pond! 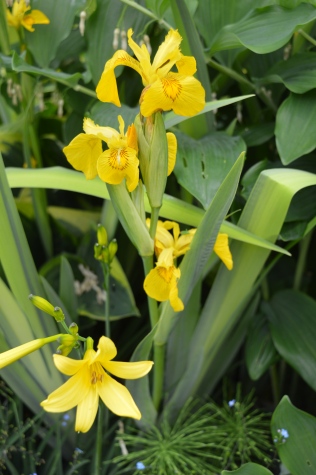 It’s the week for foxgloves too, a huge clump has flowered down by the conservatory, I think this one is self sown but it is beautiful, even my OH has commented on it! Up by the obelisk there’s a lovely array of different coloured foxgloves, purple, pink, light ones and dark ones, there’s also a stunning white one which you can just see on the photo of the whole garden.

The clematis are starting to climb the fence. I had to chuckle yesterday when my OH said there was already bindweed growing up the fence, I pointed out that actually they were clematis, already over half way up. He couldn’t believe they had grown so quickly!

The weeds are growing quickly as well, I’ve had several good sessions in the garden but I think I’m going to have to resort to lots of weedkiller and just hope there’s not too much collateral damage, I’ve some that can be painted on which does help me to be more precise, my other trick is to unwind bindweed and put it in a nappy bag (AKA dog poop bag!) I can then spary it liberally inside the bag and then tie the handles loosely. I can then easily tell which ones have been sprayed and it makes me less likely to get impatient and pull them up before the poison had had chance to reach the roots.

From a distance there’s lots of green in the garden and not so much colour, but hopefully that will change over the next month as the roses really put on a show.

I live in a busy market town in Yorkshire with my husband, kids, dogs and chickens. I love trying new crafts, rediscovering old ones, gardening, walking...anything creative really I started this blog after my New Year resolution worked so well. My resolution (the first one I've ever kept!) was to post a photograph of my garden on Facebook every day. My hope was that I would then see what was good in the garden and not just weeds and work, which was my tendency. The unexpected side-effect was that I have enjoyed many more hours in the garden. I am hoping that 'The Crafty Creek' will have the same effect. Happy creating!
View all posts by craftycreeky →
This entry was posted in Garden, Serendipity and tagged cottage garden, foxgloves, iris, Roses. Bookmark the permalink.

14 Responses to Monday’s Meander Round the Garden