I’ve nicknamed my blackbird Bertie, as “my embroidered blackbird in the style of William Morris” is getting a bit of a mouthful! It was nearly Bill as I did think it could be a nod to William Morris,but he really doesn’t look like a Bill, so Bertie it is!

Bertie is a design by Nicola Jarvis which I started at Stitching in the Dales, a three day embroidery retreat organised by Grassington Embroiderers Guild  where Nicola was our tutor. She does lots of other beautiful designs, mainly of birds, in either silk thread or crewel work, so do follow the link if you are interested.

During the retreat Nicola started me on the various sections, moving me onto the next one once I was happy I knew what I was doing. Once home I decided to complete each section in the order of the instruction booklet. This is where I was when I last showed you Bertie just after I got home… 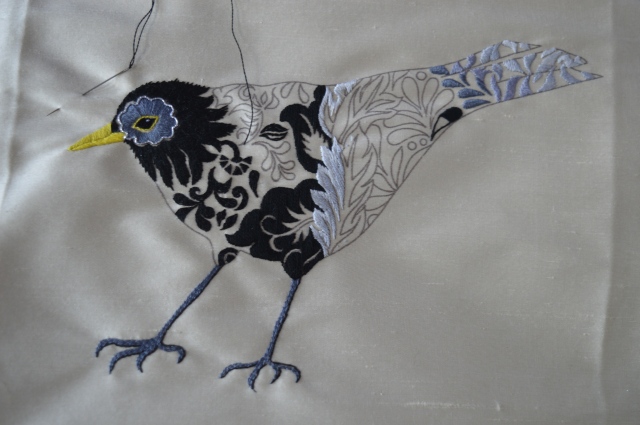 Next area to stitch was the ‘floral detail across upper back’, otherwise known as the twirly bits below his ruff! These are stitched with split stitch which doesn’t give as dense a coverage as satin stitch (or it doesn’t when I do it anyway!) but I rather like that effect. 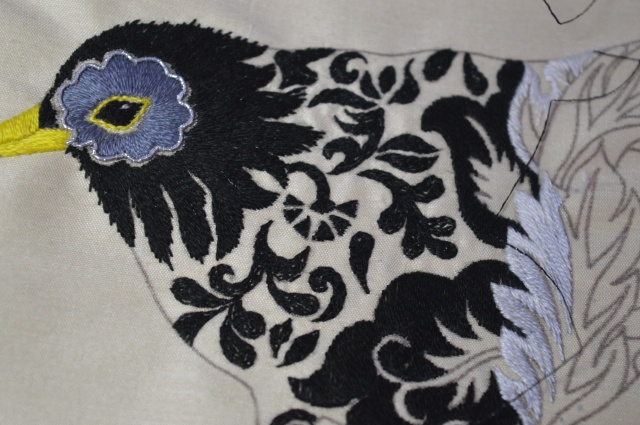 Once the twirly bits were done tiny seeding stitches were used in between the shapes. Nicola used that dreaded word when describing seeding, random, she did laugh when I mentioned that I hate that word, like I struggle with the concept. She had a student once who was a mathematician by profession, he declared that there was nothing in embroidery that was technically random as every stitch is carefully placed. I agree! Anyway, I managed a bit of random seeding stitches. I was meant to use a dark grey DMC thread but I couldn’t see anywhere in the instructions where I could use the rest of my black sparkly thread, so I used that instead, it’s just ever so slightly sparkly!

The next area for me to complete is the large black leaf area in the middle. I stitched the satin stitch in class and I’m pretty pleased with the effect. Having checked the instructions I’ve realised I now need to turn it into “Laid work with Bayeaux stitch”, which basically means threads laid across the satin stitch to hold them in place with tiny holding stitches along too.

At the moment it almost looks like I’m nearly there, but there is actually still alot of work to do, once I’ve filled all the shapes in there is then lots of couching and edge stitching so I think it will be a little while before Bertie is fully fledged!

I live in a busy market town in Yorkshire with my husband, kids, dogs and chickens. I love trying new crafts, rediscovering old ones, gardening, walking...anything creative really I started this blog after my New Year resolution worked so well. My resolution (the first one I've ever kept!) was to post a photograph of my garden on Facebook every day. My hope was that I would then see what was good in the garden and not just weeds and work, which was my tendency. The unexpected side-effect was that I have enjoyed many more hours in the garden. I am hoping that 'The Crafty Creek' will have the same effect. Happy creating!
View all posts by craftycreeky →
This entry was posted in embroidery, Serendipity and tagged Embroidered Blackbird, Embroiderers Guild, embroidery, Nicola Jarvis, Stitching in the Dales. Bookmark the permalink.

30 Responses to Bertie the Blackbird