I started another cross-stitch small a couple of weeks ago. As I was ahead with my monthly Snowflower ones I decided to have a bit of a break from them and do something that’s been in my to do pile for a while.

I love Faby Reilly designs, I’ve stitched quite a few of her designs now, they’re just so pretty and a bit different, I like the way she uses different stitches and beads to embellish and her back-stitching just lifts the design. 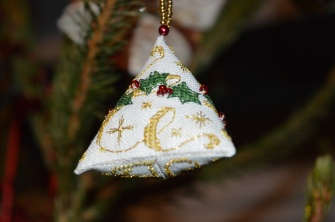 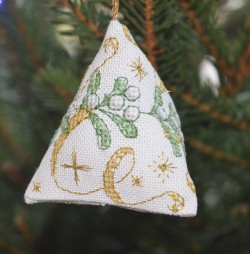 When we finished the Lizzie Stitching Wallet stitch-a-long we all got a discount code and amongst other things I bought the pattern for a poppy humbug.

I’m stitching it on a soft green linen which I think I bought by accident as it’s 28 count, whereas most of mine is 32 count. It does make it a nice size to stitch. The colour doesn’t show up at all in the photo below so you just have to imagine a nice soft green!

I started in the middle, but as soon as I had finished the cross-stitch on the first poppy I stitched the back-stitch round the outside with the markings every 5 stitches, it does make it so much easier with this kind of project as I didn’t need to count across from one poppy to the next. It will be used for whip-stitching it together at the end.

The poppies are growing pretty quickly, I’ve just started back-stitching one so I’m not left with all the back-stitching at the end. I’m also stitching the lettering every so often, mainly when I’ve got good light as it’s cross-stitch over one thread – tiny! It took me a while to work out the words, when the centre seam is stitched it will say Poppy across the bottom, but the word going up took a little more working out. It’s coquelicot, I reached for my big French dictionary from the shelf and discovered it is french for poppy. I rather like having both words on the design.

Hopefully I will have it finished and on display when the poppies come into flower in our garden.

I live in a busy market town in Yorkshire with my husband, kids, dogs and chickens. I love trying new crafts, rediscovering old ones, gardening, walking...anything creative really I started this blog after my New Year resolution worked so well. My resolution (the first one I've ever kept!) was to post a photograph of my garden on Facebook every day. My hope was that I would then see what was good in the garden and not just weeds and work, which was my tendency. The unexpected side-effect was that I have enjoyed many more hours in the garden. I am hoping that 'The Crafty Creek' will have the same effect. Happy creating!
View all posts by craftycreeky →
This entry was posted in embroidery, Serendipity and tagged Cross-stitch humbug, Faby Reilly Designs, Poppy. Bookmark the permalink.