I have just started the final border on my Down the Rabbit Hole quilt, this doesn’t mean I’m nearly there as I still have a side to applique vines on….all those leaves! I decided to cut out and stitch the remaining border as it’s all machine stitched, so as soon as I’ve hand-stitched my vines, I will hopefully be able to stitch the border straight on and finish my quilt….I’ve also another quilt which I need to make by the end of February so I really want to clear my cutting table of rabbit fabrics so I can concentrate on that one!

The last border is a geometric one, squares on points. it doesn’t appear to be as hard as it looks, or so Sarah Fielke tells us! It took me a while to work out the fabrics as I was limited by what I had left, so it’s a bit ‘scrappy’ but I think it will bring the quilt together. Having seen a few colour ways on facebook I decided I wanted a darker shade in the centre, surrounded by light squares, with medium triangles in the gaps. 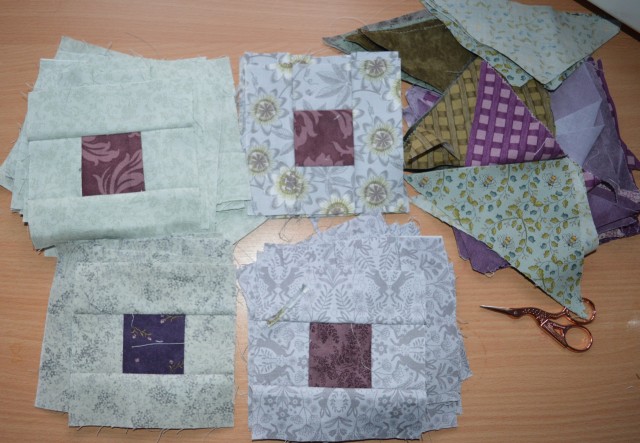 I didn’t have enough of any of the dark purple fabrics to do all 60 squares, so I’ve used three different ones, there are only four of the darkest one so they will be in the corners. I also had to pick and mix a bit for the light green squares, basically using up what I had left. It worked out quite well that one particularly pretty fabric was just enough to do the four corner squares. I’ve now got four piles of squares stitched together, ready to be made into the border.

For the triangles I’m working my way through all the little squares and strips I’ve got left, I’ve cut out all the purple ones I need, just a few more green ones required. I couldn’t resist starting to sew a few together to see how it was working out…

As the previous border is a mid purple shade, my plan was to have all the green fabrics on the inside and all the purple on the outside. Then I started playing around with them, so now I’m not so sure!

I think I might prefer the alternating one, I think I need to stitch a few more ministrips so I get a bigger picture, maybe laying the whole quilt out with them…

I had to chuckle at the weekend, over the last six months I’ve started trying to do the cryptic crossword in the Metro, a free paper here in the UK. With cryptic crosswords you really need to do the same one regularly so you get to know the writer and his clues. I like the way you can work out an answer with cryptic ones, I often keep trying for several days as I suddenly work one out. I don’t often finish the crossword but I like trying! What made me chuckle on Sunday is that I finally worked out an answer to a clue in Fridays crossword and it really shouldn’t have taken me 48 hours to work this one out…

For those of you who don’t understand cryptic clues, 50 in roman numerals is L, so about fifty means there’s an L in the middle of the word. Another word for leaves is quits, put L in the middle and you have quilts…why did that take two days to work out!

There was another sewing related one yesterday as well, Where needles are kept, just in case. I got that one straight away, Etui, though I did wonder how many people would know what an etui was!

I live in a busy market town in Yorkshire with my husband, kids, dogs and chickens. I love trying new crafts, rediscovering old ones, gardening, walking...anything creative really I started this blog after my New Year resolution worked so well. My resolution (the first one I've ever kept!) was to post a photograph of my garden on Facebook every day. My hope was that I would then see what was good in the garden and not just weeds and work, which was my tendency. The unexpected side-effect was that I have enjoyed many more hours in the garden. I am hoping that 'The Crafty Creek' will have the same effect. Happy creating!
View all posts by craftycreeky →
This entry was posted in Down The Rabbit Hole, Quilt-a-long, Quilting, Serendipity and tagged #downtherabbithole, Down The Rabbit Hole, Quilting. Bookmark the permalink.

14 Responses to The Final Border!