Having finally finished my stump work and silk ribbon embroidery last month,it was  time to choose a new project to share. Now I’ve got three major projects in mind from a single copy of Inspirations magasine but I decided to do a fairly quick cross-stitch project first which needed to take priority…

During the summer Kate of Tall Tales from Chiconia shared her design for her next fundraising quilt for Ovarian Cancer, it’s called Signed, Tealed Delivered . Teal is the colour for ovarian cancer charities, a bit like pink for breast cancer. It’s a gorgeous design of letters and postcards, I noticed in the centre there was an embroidered postmark, in a rash moment I volunteered to stitch it!

When Kate sent the pattern over I saw it was a cross-stitch design with about 5 shades of teal used pretty randomly to give that nice mottled effect of a postal mark. I suggested that using a variegated thread would give a very similar effect with much less chance of me making a mistake – the last thing I want is to get all the way round to find the ends don’t meet up because I’ve mis-counted!

DMC4030 and 4025 are variegated threads in teal shades. I bought a couple of skeins in teal as well with the idea of mixing them to make the colour changes more muted. I sent a photo over and fortunately Kate was happy! In the end I used 4030 and 3848

I started a couple of weeks ago and luckily it’s growing pretty quickly as I’ve not had much sewing time over the last month, but by just doing half an hour last thing on an evening sometimes I’m making good progress.

The variegated thread is working out well. I’m using two threads for the circle, and one thread mixed with a darker teal thread for the letters so they stand out just a little bit more. When stitching cross-stitch with variegated threads it is recommended that the stitches are made individually, rather than doing a row of half crosses, then a return row. This makes the variegation clearer as shades aren’t mixed, however I decided to stitch in rows in order to make the variations more muted, I’m pleased with the effect! 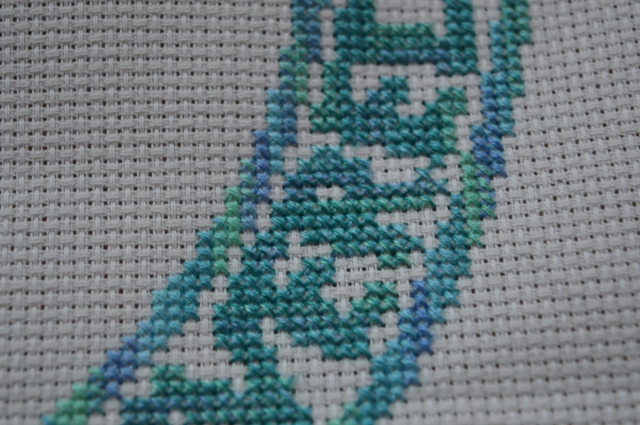 I’ve found it easier to stitch the letters first, followed by the circle, I think I’m less likely to make a mistake that way!

Hopefully in three weeks time I’ll have cracked on with it.

There’s quite a few of us around the world taking part in this stitch-a-long, we all choose our own projects so there’s all sorts of different types of hand sewing. Why not have a look what everyone else is stitching, just follow the links to see some stunning projects;

Everyone is in different time scales, so if there isn’t a post when you first look, check later in the day. If you fancy joining us for the SAL, just send a message to Avis.

I live in a busy market town in Yorkshire with my husband, kids, dogs and chickens. I love trying new crafts, rediscovering old ones, gardening, walking...anything creative really I started this blog after my New Year resolution worked so well. My resolution (the first one I've ever kept!) was to post a photograph of my garden on Facebook every day. My hope was that I would then see what was good in the garden and not just weeds and work, which was my tendency. The unexpected side-effect was that I have enjoyed many more hours in the garden. I am hoping that 'The Crafty Creek' will have the same effect. Happy creating!
View all posts by craftycreeky →
This entry was posted in embroidery, Serendipity, Stitch-a-long. Bookmark the permalink.