It’s happy dance time again, Snoopy is certainly getting his excercise at the moment as I seem to have a few finishes all at once!

I started this stitch-a-long back in early summer, it’s organised by Faby Reilly, all we saw when we booked on the stitch-a-long was a little glimpse of some stitching, it was enough to know how pretty it was going to be! Every one or two weeks she released another section of the chart, she seemed to time it pretty well with the time I had available to stitch.

On Monday she released all the finishing instructions. I tackled the biscornu scissor fob first. This was a bit fiddly just because it’s small but it went together easily enough. The back-stitch ruler markings every 5 stitches round the edge help enormously when lining up the corner with the mid side . It’s stitched together with whip-stitch through the back-stitch which gives a lovely neat edge. I love the zig-zag effect of the biscornu, it’s just so pretty.

For the main wallet the pocket and the tab were lined first, I just used some cream quilting fabric and slip-stitched it round. The pocket was stitched on with whip-stitch again and the tab was pinned on to be whip-stitched in when the main pieces went together. The scissors are held in their holder with a ribbon tie, it was meant to be stitched on with a sequin, but as I’d removed my sequins and replaced them with vintage buttons I found another tiny button for the centre.

Whip-stitching three sides together was pretty straight forward, I decided to add a glass bead every tenth stitch (markings were so usuful here as well!) I happened to have some delicate pink ones which matched the embroidery beautifully.

Before the bottom edge could be stitched I had to position the Timtex, I’ve not used this before but it’s like a really stiff, spongy interfacing. The knack I found was to get it exactly the right size, the fiddly bit was getting it positioned on the right side of the seams at the other end! The instructions recommended pinning  along the stitching lines of the spines to hold them in place before stitching along the lines at the end. I decided to stitch each spine as I went along, so I positioned the Timtex, whip-stitched along the bottom of that piece before making a running stitch along the edges of the spine to hold it in place. The running stitch wasn’t as easy as it sounds as I had to ensure the line was correct on the outside and the inside! Once one third was done I positioned the next Timtex and stitched the next third of the bottom edge and so on.

The last part to stitch was the fastener, the instructions suggest velcro or a popper, I wasn’t keen on either so I continued my button theme with a slightly bigger button which has a lovely pink iridescence to it. I made a buttonhole bar at the end of the tab and my Lizzie Stitching Wallet was complete. 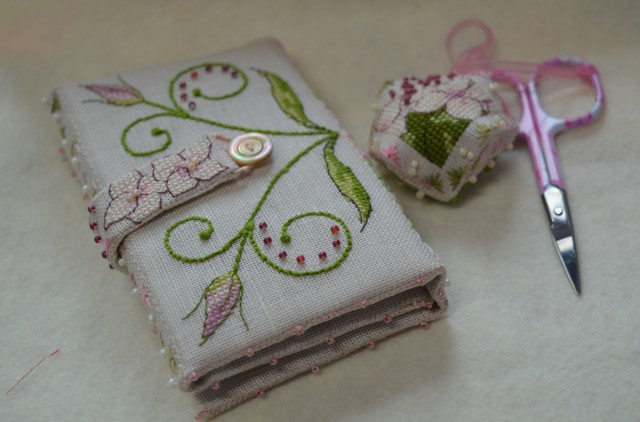 I love it! It’s so dainty and beautiful, it’s typical of Faby Reilly’s designs really, I do like her style.  I’m planning to use it for my Embroiderers Guild days but I think I might keep it nice until next summer so I can put it in the local shows! If any fancies stitching this I think Faby is planning to release the pdf pattern in November on her website. I’ve thoroughly enjoyed this stitch-a-long and I’ll certainly keep my eye open for any further ones Faby organises. In the meantime I’ve a couple more of Faby’s designs waiting to be stitched! 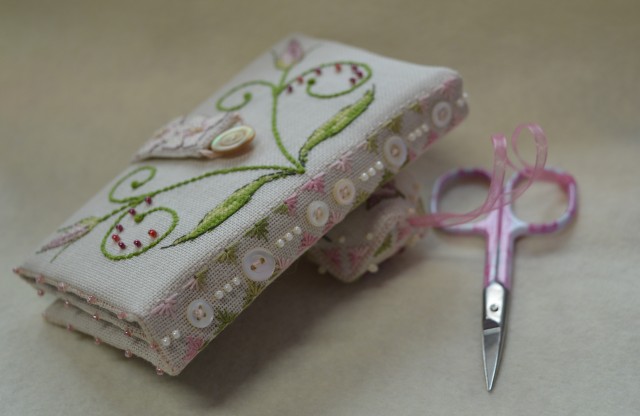 I’m linking up with Kathy’s Quilts for Slow Stitching Sunday,  and Handmade Monday on Sum of their Stories, why not follow the link and see what everyone else has been stitching.

I live in a busy market town in Yorkshire with my husband, kids, dogs and chickens. I love trying new crafts, rediscovering old ones, gardening, walking...anything creative really I started this blog after my New Year resolution worked so well. My resolution (the first one I've ever kept!) was to post a photograph of my garden on Facebook every day. My hope was that I would then see what was good in the garden and not just weeds and work, which was my tendency. The unexpected side-effect was that I have enjoyed many more hours in the garden. I am hoping that 'The Crafty Creek' will have the same effect. Happy creating!
View all posts by craftycreeky →
This entry was posted in embroidery, Serendipity, Stitch-a-long and tagged cross-stitch, Faby Reilly Designs, Lizzie Stitching Wallet. Bookmark the permalink.