Memories in my Stitch Book

Posted on September 24, 2017 by craftycreeky

View from our hotel!

I’ve just had a few days away in the Lake District, walking the fells with a friend. We had a great time, if somewhat tiring! Of course I had to take a little stitching to keep me amused in the evenings! I decided to take another double page spread of my stitch dictionary.

I started this project a couple of months ago as a small portable bit of stitching. It’s not quite as portable as I envisaged as inevitably I need to be near a mobile or my computer for a lot of it to get the instructions off Pintangle. Sharon on Pintangle has created an amazing resource with her stitch dictionary, hundreds of different stitches with easy to follow instructions and lots of examples!  I’m trying to stitch all 100 TAST stitches in a fabric book, I’ve put them all into stitch groups so this time I started with a page on cretan stitch, number 4 of the TAST stitches. I used DMC 4515 for all these stitches.

Cretan stitch is a bit like feather stitch, just a bit more regulated and square. I worked a basic cretan stitch first, then started to have a bit of a play with narrow bands, interlocking bands, close cretan stitch (very close together!). These were all embroidered during my first evening in a lovely B&B in Keswick.

Our second night was in an old farmhouse above Loweswater, we had walked 13.5 miles from Whinlatter Forest which seen as we were expecting an 11 mile walk, seemed an awful long way, especially when it rained! After tea round the farmhouse table I had time to do a few more rows.

Cretan stitch can also be used to make a leaf, the height of the uprights can also be varied. Knotted cretan stitch (TAST no. 21) has a simple knot formed at each junction, I did that one from memory as there was no internet (or phone signal) in the farmhouse. I was pleased to see I’d remembered it right when I returned to the land of technology! I think it would be more effective in a thicker thread such as a perle, but I only had stranded cotton with me. 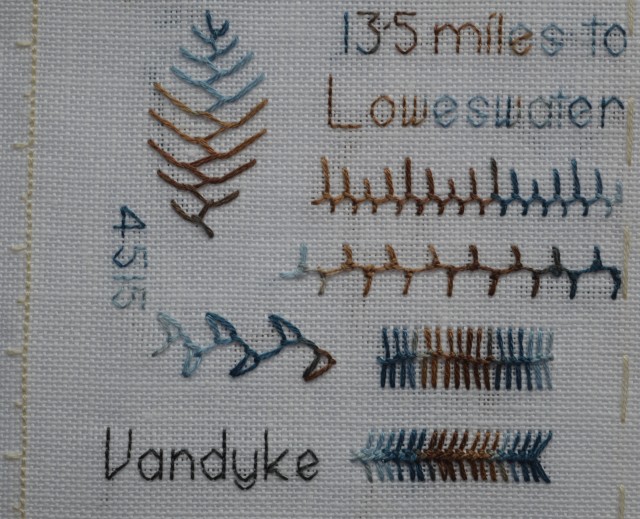 The list  of stitches I’d taken with me included looped cretan, my stitch book didn’t have that but had a ‘looped’ stitch, it looked like it could be from the same family, it’s a bit like the close cretan, so I stitched a short length . I found the next day that looped cretan (TAST 50) is completely different, like triangles of cretan stitch, luckily I had enough room left to add a short length of that too.

At the bottom I had enough room to add another stitch, Van dyke (TAST 28), it’s a similar style to cretan, just formed slightly differently.

The next day we followed a very pretty path through woodland along the far side of Loweswater, followed by a very boggy path along Crummockwater to reach our next B&B at Buttermere. We had internet there but no mobile!! I started a new page of Herringbone using DMC 4504. 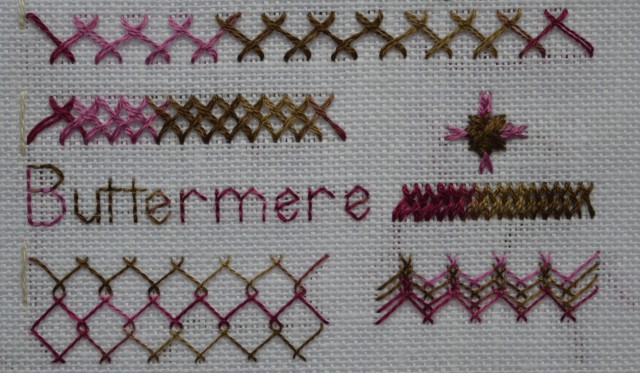 I started the page with a row of basic herringbone (TAST 5) and then closed herringbone, which is where there is no gap inbetween the crosses (TAST 92). I also tried a herringbone square, this is made in layers, firstly four herringbone stitches are made in a square shape, a whip stitch then laces these together, followed by straight stitches over the top (TAST 87)

The herringbone stitch below the square is another length of closed herringbone, just much closer together, this creates a double row of back stitch on the reverse and so can be used for shadow work.

Having found the internet again and the ideas on Pintangle I played a bit with rows of herringbone in a sort of net design and then stacked closely together. This one was a bit fiddly as the little crosses form over the longstitch above.

During the last evening I stitched a raised herringbone band (TAST 75) which is another one done in layers. The bottom layer is a band of satin stitch. The herringbone is stitched over this. A whipping stitch is then used through the herringbone, it does create a lovely effect.

I think the next one is my favourite, buttonholed herringbone (TAST 51) A row of herringbone is stitched first as a base, each length is then covered in buttonhole stitch with one stitch at the junctions. I think it looks a bit like foliage swags!

Fancy herringbone was next to learn (TAST 70) I’m not sure about this one, it’s probably another stitch that would be much better in a different thread. A base of herringbone is stitched, followed by tiny crosses over each junction. The top thread is then woven through the tiny stitches to create a loopy effect. I think it would look neater with a more springy thread that held a curve.

The bottom stitch is double herringbone 1, which is two rows of herringbone interlinked. The pretty stitch up the side is breton stitch (TAST 85) which is like a herringbone with a twist!

So in these two pages I think I’ve included eleven different TAST stitches, plus a couple of extras. I’ve also stitched memories of our walk in the lakes. We’ve renamed it the Four Lakes Walk, hopefully I’ll tell you a bit more about it in the next couple of days.

I’m linking up with Kathy’s Quilts for Slow Stitching Sunday, why not follow the link and have a look what everyone else is stitching today.

I live in a busy market town in Yorkshire with my husband, kids, dogs and chickens. I love trying new crafts, rediscovering old ones, gardening, walking...anything creative really I started this blog after my New Year resolution worked so well. My resolution (the first one I've ever kept!) was to post a photograph of my garden on Facebook every day. My hope was that I would then see what was good in the garden and not just weeds and work, which was my tendency. The unexpected side-effect was that I have enjoyed many more hours in the garden. I am hoping that 'The Crafty Creek' will have the same effect. Happy creating!
View all posts by craftycreeky →
This entry was posted in Serendipity, TAST, Textile Books and tagged Herringbone Stitch, TAST Cretan Stitch Van Dyke Stitch. Bookmark the permalink.

27 Responses to Memories in my Stitch Book