Posted on August 8, 2017 by craftycreeky

I’ve decided to enter the handicraft section of the local flower show, I’ve never been so I’ve no idea what the competition is like, but it’s only like 50p per entry…so I’ve entered ten items 🙂

One class is ‘A Colourful Cushion’, making a cushion for the show has also helped me as I’ve made the (possibly rash) move of booking a stall at the Dickensian fair at one of the local villages in December, to have a go at selling some  of my makes. Cushions is something I thought of making.

The fabric is gorgeous, it was an off-cut from one of the soft furnishing shops in Otley, they have pretty good sales, they sell the ‘nice’ curtain fabric such as Voyager and they sell off display lengths, end of rolls and shorter lengths, this was obviously what they cut off the bottom of a curtain.

I found a tutorial on Pinterest which gave me the idea. The cushion pad is 12″ by 20″ so I aimed to have the two end panels 7″ wide and the pleats 6″.  I bought a coordinating batik on Skipton market for the pleats and the binding. The pleats were my first job. I decided to try a technique I saw mentioned on a blog just a few weeks ago, using a dinner fork! It works a treat! You basically inset the fabric in between the end two tines and then twist it back, it holds it beautifully. I quite fancy making a pleated skirt now! As this was such a short width I managed to carry the pleats across with the iron. I basted them down before sewing the end panels on.

The piping was also helped with a tutorial on YouTube, how to join two ends of covered piping! I must admit in the past I’ve just winged it and crossed them over and into the back, but having seen this tutorial I decided to learn how to do it properly, especially as I want to sell some. It was fiddly but doable, just joining the two ends on the bias at just the right point (that was the tricky bit!) and then trimming the cord to fit.

I wanted to put buttons on the back to fasten, rather than a zip. Zips are trickier to get neat, but they are also not cheap, especially when you are looking at 18″ ones. I think buttons also make a nice feature on the back. I edged one side with the batik, just to make a feature. My original plan was to cover three large buttons with the batik, of course I only had two in my button box, I thought I’d do five smaller ones when I spotted at the bottom of the box some raspberry pink buttons I’ve had for ages, I knew I had a few and sure enough I found five. I think I prefer five smaller ones now, they seem to hold it nice and firm, my only concern is that they have metal shanks and I’ve had bad experiences with metal shank buttons…ping…ping…ping…so long as they last til Saturday night! 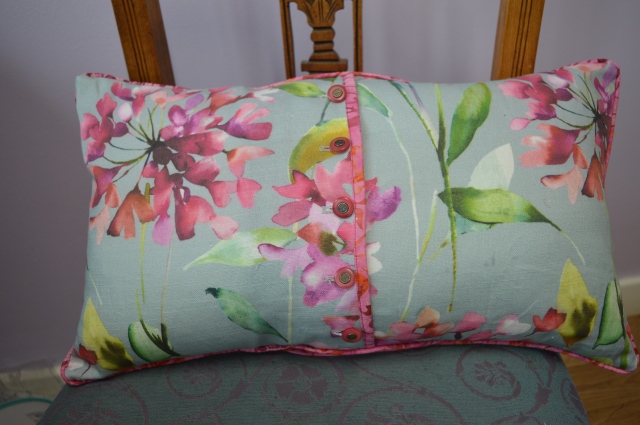 I’m really pleased with my cushion. The piping looks good, the colour scheme works well, I like the pleating detail, I just need to work out how to stop it ‘bulging’ in the middle, it’s got a bit of middle age spread at the moment! After the show I might try adding some iron on interfacing to the back, see if that holds it better.

I think it’s very apt for a flower show!

I live in a busy market town in Yorkshire with my husband, kids, dogs and chickens. I love trying new crafts, rediscovering old ones, gardening, walking...anything creative really I started this blog after my New Year resolution worked so well. My resolution (the first one I've ever kept!) was to post a photograph of my garden on Facebook every day. My hope was that I would then see what was good in the garden and not just weeds and work, which was my tendency. The unexpected side-effect was that I have enjoyed many more hours in the garden. I am hoping that 'The Crafty Creek' will have the same effect. Happy creating!
View all posts by craftycreeky →
This entry was posted in Home, Serendipity, Sewing and tagged Making Cushions, pleating with a fork. Bookmark the permalink.

13 Responses to A Colourful Cushion