Posted on August 7, 2017 by craftycreeky 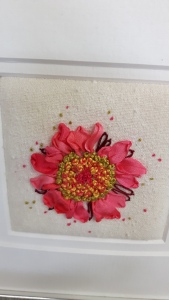 There’s a local show on Saturday, one I’ve not been to before but a friend suggested I enter some of my handicrafts in…so I’ve entered ten items in the crafts and the photography classes! Ironically I’m also judging handicrafts at another local village show, so it’s going to be a day of shows 🙂

Having entered two items in the embroidery section I realised that although I’ve done alot of embroidery this year, most of it has been given away! Whilst moodling through my sewing box this afternoon  (the one I take on workshops with me) I found a piece I started back in May at Denman College. It was at the end of the ribbon embroidery course and I had an hour to spare so, inspired by one of the tutors samples (Marilyn Pipe – brilliant tutor and wonderful lady!)  I started a flower head, Marilyn had made daisy or gerbera type flowers, I fancied making a poppy.

I got as far as embroidering a circle of french knots, the centre is a variegated red with charcoal grey,the outer ring is a dark grey variegated thread with black. The knots are quite chunky with three threads and three wraps.

I only had one length of red ribbon, 4mm wide, so I decided to dye some 7mm and some 12mm. I tried red with a touch of pink to start with, but it didn’t look deep enough, so I overdyed it with a new mixture, red with a single drop of black, better..whilst I was mixing the ribbon in I put a few more drops of red in for good measure – perfect! It’s a nice deep, rich red, just what I wanted.

My plan originally was to try and make it look like four petals, I drew an outline with my silver gelpen and started with the widest ribbon. I just used basic ribbon stitch, trying to keep the points as broad as I could. I made two stitches on each petal, then added the 7mm ribbon along side, making some lie towards one side or the other, trying to get the petal shape. Finally I added the 4mm ribbon, that’s the only bought one and it’s a brighter red, which gives a nice contrast, but to stop it looking too stripey I tucked most of them behind the other ribbons.

In the end the ribbons don’t look like four petals, but I think they do look like the crinkly edge of a poppy.

In between the french knots and the ribbon was a very narrow white strip, I left it as it made it easier to make the ribbon stitches, but I also planned from the start to add a circle of tiny black beads to add texture and to snuggle in the gap between the centre and the petals.

I felt the background needed a bit of interest so I used a varigated DMC thread in yellow, orange and red to make little back-stitch and french knot squiggles.

I borrowed a deep picture frame from my daughter’s wall. It really needs a different colour mount, even more of an ivory, but I know I won’t have chance to get one before the show, so this will have to suffice. It would be interesting to try this again with a silk painted background, maybe in greens and reds like a poppy field. 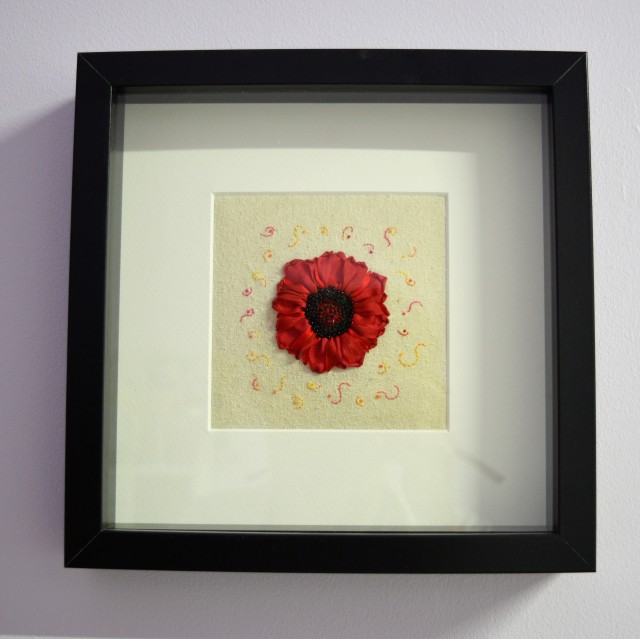 I’m linking up with Kathy’s Quilts for Slow Stitching Sunday, why not follow the link and see what every else has been stitching.

I live in a busy market town in Yorkshire with my husband, kids, dogs and chickens. I love trying new crafts, rediscovering old ones, gardening, walking...anything creative really I started this blog after my New Year resolution worked so well. My resolution (the first one I've ever kept!) was to post a photograph of my garden on Facebook every day. My hope was that I would then see what was good in the garden and not just weeds and work, which was my tendency. The unexpected side-effect was that I have enjoyed many more hours in the garden. I am hoping that 'The Crafty Creek' will have the same effect. Happy creating!
View all posts by craftycreeky →
This entry was posted in embroidery, Serendipity and tagged Poppy, Silk Ribbon Embroidery. Bookmark the permalink.

10 Responses to Poppy in Silk Ribbon