Over a year ago I happened to read about an international travelling sketchbook that was being organised by Anne Lawson in Australia, I love the idea of a sketchbook travelling around the world with people from lots of different countries and crafts adding something so personal to them so I immediately asked if I could take part.

‘The Sisterhood of the Travelling Sketchbook’ (to give it it’s full title!) has been wending it’s way around the world every since, from Australia, to America and then over to Europe and a couple of weeks ago it landed on my doorstep. It was pretty exciting and awe-inspiring to finally see it for real, I’ll show you when I have finished my entry, this is a half way post!!

I mulled over ideas of what to do for several months, I wanted something to represent the English countryside that I love. At first I wondered abut embroidered flowers, then Yorkshire scenery, but I finally decided on Catbells, as soon as I thought of it I knew it was the right theme for me, it’s a very special place for me and it’s the countryside that I love. Hence you will have seen several embroideries of Catbells over the last few months as I practiced different ideas and techniques.

This was my first attempt, which I was really pleased with. 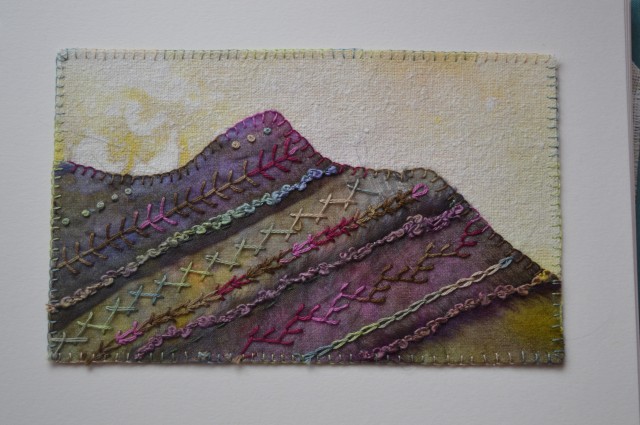 For this one though I also wanted to include the reflection on Derwentwater, I order a few different shades of organza from Stef Francis, organza is very shiny, which took me a bit to get used to as I’m not really a blingy sort of person, but it does give the light I needed for the lake.

First  I dyed some nial silk with silk paints. I wet the silk first so it was nice and smudgy. I stitched the fell from torn strips of hand-dyed chiffon as before. The strips lie diagonal to show the shape of the fell. I decided to ignore the fact that the reflection should be a mirror image with the diagonal lines running the other way, call it artistic license!! Once the organza was overlaid it didn’t really show!

I tacked round the edges to hold everything in place and then started embroidering. The outline of Catbells is blanket-stitched to give a firm edge. For the flank of Catbells I searched my stitch books for new stitches to try. I’ve used three different types of chain-stitch, herringbone, feather and thorn stitch with a few french knots at the side. In a mixed pack from Stef Francis I used a textured thread and a thick silk thread couched along the lines. 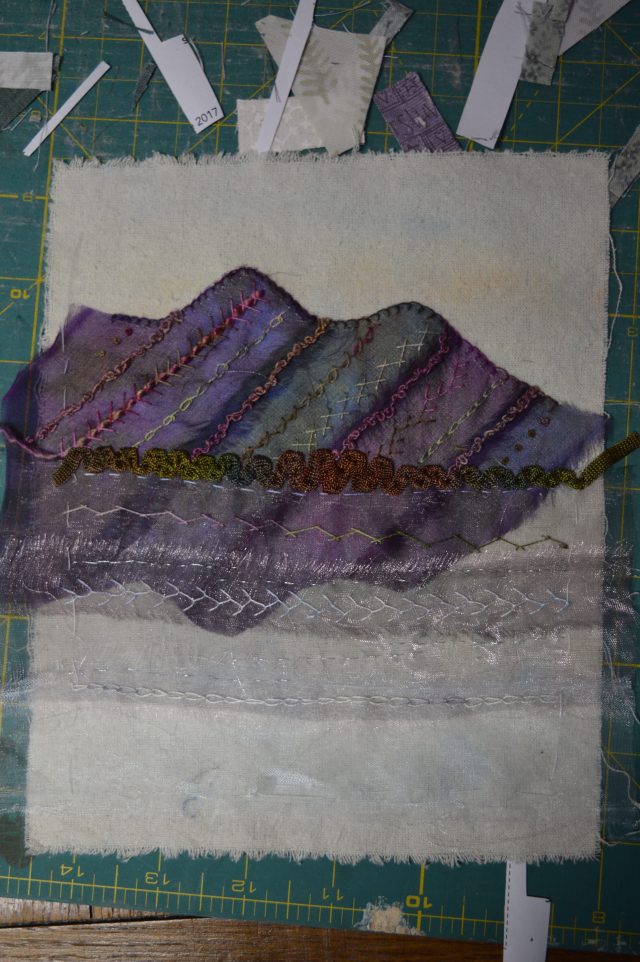 The water took a bit more thought as it was new territory for me. I used three strips of organza, all in slightly different shades. It took a lot of playing to get the balance right between seeing the chiffon underneath the organza, but nether being too dominant.

I embroidered along each strip to hold it in place, using herringbone, feather and chain stitch again. I added some lines of running stitch in a fine silver thread both to help secure it and to give a bit of light.

I still needed something for the trees along the shoreline. My initial idea was to use a textile which I think is made from bark, it sort of looked right, but somehow didn’t, probably because it was the only non fabric item. I decided to try some hand-dyed viscose ribbon I just stitched it in a zig-zag sort of pattern, making it taller in the middle. I think it works well. 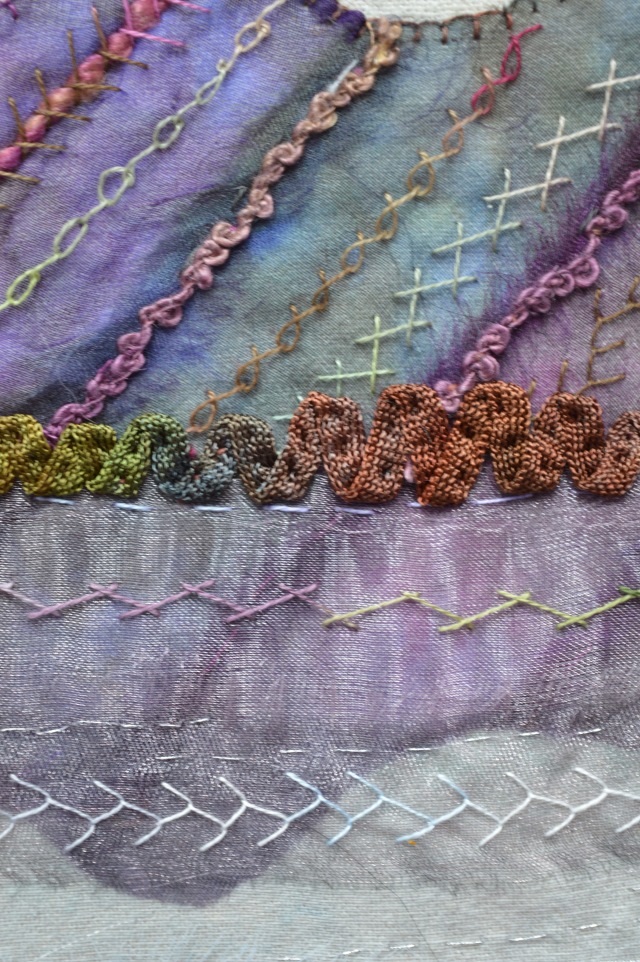 All that was left was to trim my embroidery and blanket-stitch round the edges. I’m really pleased with this piece. I particularly love the way the water looks different from different angles, it’s not easy to photograph but I think it’s very effective. 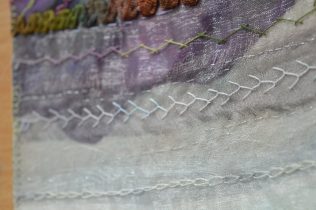 I decided I wanted to do a map of some kind for the facing page of my entry, I even wondered about embroidering on an actual map, but the scale was completely wrong. I was still mulling it over when a chance comment from Kate Chiconi gave me the idea. I’m making nine inchies (well, they are actually inch and a halfies!) to represent the different parts of my favourite walk. I’m about half way through so hopefully I’ll be able to show you them soon. In the meantime, here’s Catbells on Derwentwater. 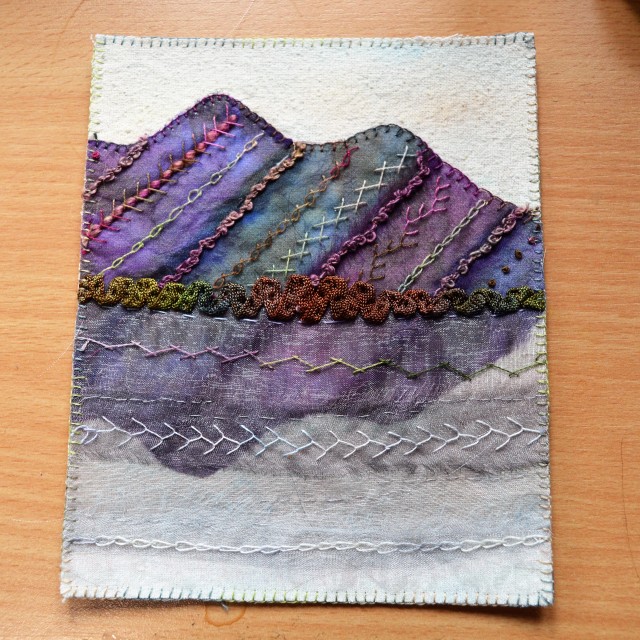 I live in a busy market town in Yorkshire with my husband, kids, dogs and chickens. I love trying new crafts, rediscovering old ones, gardening, walking...anything creative really I started this blog after my New Year resolution worked so well. My resolution (the first one I've ever kept!) was to post a photograph of my garden on Facebook every day. My hope was that I would then see what was good in the garden and not just weeds and work, which was my tendency. The unexpected side-effect was that I have enjoyed many more hours in the garden. I am hoping that 'The Crafty Creek' will have the same effect. Happy creating!
View all posts by craftycreeky →
This entry was posted in embroidery, Serendipity and tagged Catbells, embroidery, The Sisterhood of the Travelling Sketchbook. Bookmark the permalink.