Last night I put the last few stitches in my Paisley Splash quilt. This is the one that is going to be auctioned for the Emyr Owen Latch branch. I’ve just finished it in time as they have a big ball and auction in a couple of weeks time. I’ve made this as part of the Hands2Help Quilt Challenge, I’m sending one or two tops to America as well, but this is my main one.

I’ve not made a quilt to be auctioned before, I felt it had to be a design with a bit of wow factor, one that could be held up in a hall and have enough impact for people to think ‘Yes, I want to bid on that!” I also had to think what age I wanted to aim the quilt at. Latch is a Welsh charity that supports families of children with cancer, both emotionally, practically and financially if necessary. In the end I decided  to use the Paisley Splash design, a free pattern from Windham Fabrics. The pattern is for a cot quilt, but I decided if I enlarged it with a few borders I could make it nearer a single bed size, the finished quilt measures approximately 60″ square so it is a bit small to be officially called a single bed quilt, but it’s big enough to be a throw on a bed. Hopefully the design will not just appeal to children but also those a bit older who like elephants!

The elephant part went together surprisingly easily, I’ve described the process more in an earlier post here. I added a couple of narrow borders and then added a piano key border from any scraps I could find that fitted into the colour scheme. To make a piano key border I cut strips about 2.5″ wide and group them together according to length, so all the ones that are about 15″ long are stitched together, the 8″ ones are in another group and so on. Once I’d pressed them I then cut them into 4″ strips, it was then a fairly easy process to stitch the strips into longer lengths.

I added one more white border and then a deep batik border and that I decided was big enough. I used an elephant print on the back which looks really sweet but turned into a bit of a nightmare. As the fabric was 45″ wide I needed to have a seam down the back, I cut one length and then tried to suss out where the pattern match was by the selvedges. It took me a while to realise it didn’t!!! I’ve made dozens of sets of curtains over the years so I’m completely au fait with pattern repeats, they usually match within an inch or so of the selvage, not this one! The only way I could get the pattern to match was to move 12″ in from the selvage…not impressed!

Having made the backing, I sandwiched the quilt on the floor with 505 basting spray, I love seeing quilts stretched out like this, they look so smooth and perfect! 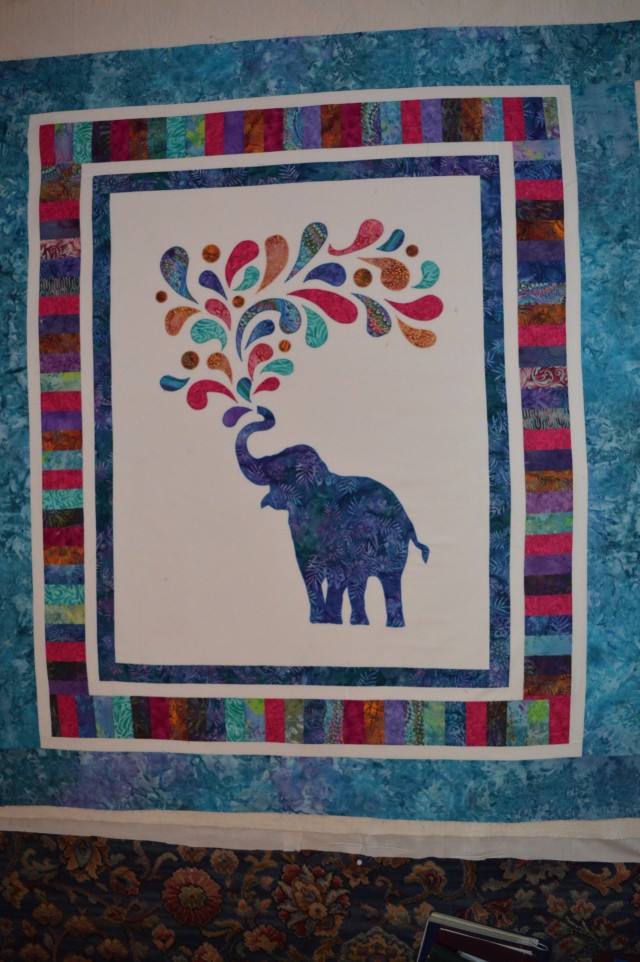 I decided to quilt with my usual free-motion quilting pattern, which is a sort of mixture of a wave and a leaf!! I find it much easier than a meander as I found the meander always went wobbly when I had to stop, with this pattern I stop at a point, this gives me chance to ‘re-group’ and decide where I’m going next. I can see my quilting improving with each quilt I do, but I still haven’t quite got the back right, the tension isn’t quite right and I still get occasional ‘eye-lashes’, apparently this is due to going too fast. I’d love a sewing machine that had a go-slow button and it is a fine line between going slow enough for the tension but fast enough to get a smooth line. It would probably also be better if I had enough confidence in my quilting to not worry about matching thread, just use the same top and bottom instead. Having said all that, I’m pretty pleased with this quilting, I used Gutermann Sulky variegated thread in light blues and greens, which blends in well with the paisley splash, but isn’t too dark on the background.

I used the outer border batik for binding the quilt as well, mainly because I had plenty left, but also because it’s actually a dress weight batik so it makes a lovely soft edge. I spent the last two evenings hand-stitching the binding down.

Every quilt should have a name, I’ve decided to call this one ‘Making a Splash for Emyr’ I embroidered the name, date and my initials along the top of an elephant in the bottom corner.

Hopefully it will raise lots of money for the Emyr Owen Latch branch in Porthcawl, Wales.

I’m linking up with Kathy’s Quilts for Slow Stitching Sunday, why not have a look what everyone else has been hand-stitching. 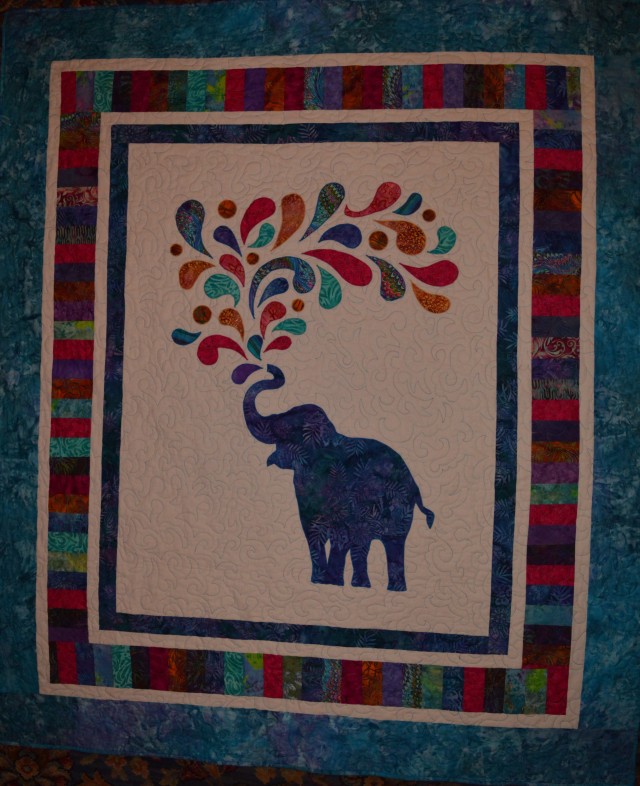 I live in a busy market town in Yorkshire with my husband, kids, dogs and chickens. I love trying new crafts, rediscovering old ones, gardening, walking...anything creative really I started this blog after my New Year resolution worked so well. My resolution (the first one I've ever kept!) was to post a photograph of my garden on Facebook every day. My hope was that I would then see what was good in the garden and not just weeds and work, which was my tendency. The unexpected side-effect was that I have enjoyed many more hours in the garden. I am hoping that 'The Crafty Creek' will have the same effect. Happy creating!
View all posts by craftycreeky →
This entry was posted in Quilting, Serendipity and tagged Emyr Owen Latch, Free Motion Quilting, Hands2Help Quilt Challenge, Paisley Splash. Bookmark the permalink.