It’s another finish!! I did say I had a few projects I wanted to complete and this is another one ticked off! It’s a block of the month by Lynette Anderson called Anderson’s Farm. I managed to embroider the last block last week, so ‘all’ I had to do was stitch the blocks together, add the sashing and quilt it…

The border is ‘piano keys’, a long line of 1.5″ x 4.5″  blocks, I got myself a bit of a production line going. I cut the blocks at least 9.5″ long, six of each colour, I arranged the little piles of blocks into a colour order I liked so I could easily stitch a double width length and then cut it in half to make the 4.5″ strips. It worked pretty well, I like the regularity of the colours round the edge. I’m really pleased with the quilting on this one. It’s not a huge quilt (33 x 48″) so I could do free motion quilting to fit the blocks fairly easily. I started off stitching in the ditch round each block, to give the whole quilt stability as I concentrated on each block. I used two different colours, soft green and off white for the front of the quilt. I quickly realised that Lynette was right when she advised not stitching the buttons on until the end as they do get in the way when quilting. I’d only stitched the first few on anyway but I had to remove them all for quilting.

My first forage into block quilting was the narrow borders, using my walking foot I stitched scallops across every four squares, it wasn’t as difficult as I thought it might be as I could follow the squares. I then stitched scallops in the opposite direction, it looked pretty effective. The ‘Hen and Chicks’ blocks were quilted with a simple diagonal cross and the hearts were quilted with a mini meander. So far so good…

It took me a while to decide how to quilt the picture blocks, but once I got a few ideas in my head I was off… The first idea was to follow the rays of the sun, I stitched the cockerel block first, I was so pleased with it that I did all the suns this way, so that was the sheep and the barn blocks stitched too. 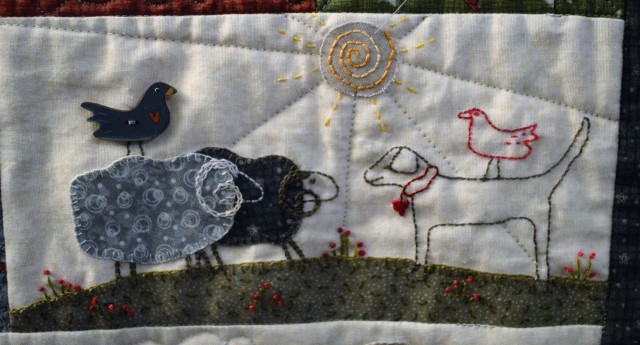 The barn needed a bit more so I quilted some extra clouds in the sky and then followed the line of the hill on the grass.

For the old farmhouse I decided to use the smoke as the inspiration and I quilted narrow wavy lines in between the embroidery and then followed the line of the hill.

Using the same idea of getting inspiration from the embroidery to do the quilting, I quilted round the big oak tree with a leaf pattern and then quilted lines round the semi-circle on the blue background. I’m really pleased with this one.

I rather like the chickens block, probably because we keep chickens, I mirrored the loopy line of the bees flight for this block, stitching lots of loopy line around the background.

The horses block took a lot of thinking as there really wasn’t much background left to quilt on and I didn’t want to quilt over the embroidered areas. In the end I took my idea from the little hearts on the trees, I used a line of  meandering hearts round the sky and the hill.

The fox and the rabbit blocks were tricky as they are so long and thin, in the end I did a gentle wave that followed the line of the wire fencing, this also gives me the argument that the unplanned wiggle in the middle doesn’t matter as that’s what wire fencing does!!. The pigs were also difficult to decide how to quilt, in the end I started a big circle round a tractor wheel and then did big loopy circles round the background, finishing round the back wheel. It turned out better than I hoped.

All that was left was the border. My first plan was to stitch a meander of large hearts, but somehow that didn’t look enough, so I decided to do a second loopy meander. Some bits of this work better than others, but it definitely gives a better coverage.

All that was left was the binding and the buttons. I would have liked to use the dark grey as the binding but I had no where near enough fabric left. I found this pretty mid grey sprig fabric in the Fent Shop in Skipton which blended pretty well so I used it for the backing and the binding. Aren’t the buttons gorgeous, my favorite has to be the rabbit, though the owl is pretty cute too!

I’ve hung my quilt on the landing, just outside my sewing room. I love this quilt, I had a few wobbles making it but I got there, it has made me want to learn to do needleturn applique properly. If anyone fancies making this quilt Lynette is starting a new Anderson’s Farm Block of the Month in the New Year. In the meantime there’s another applique quilt that might be just the right one to learn on…

I’m linking up with Kathy’s Quilts for Slow Stitching Sunday, why not have a look what everyone else has been stitching.

I live in a busy market town in Yorkshire with my husband, kids, dogs and chickens. I love trying new crafts, rediscovering old ones, gardening, walking...anything creative really I started this blog after my New Year resolution worked so well. My resolution (the first one I've ever kept!) was to post a photograph of my garden on Facebook every day. My hope was that I would then see what was good in the garden and not just weeds and work, which was my tendency. The unexpected side-effect was that I have enjoyed many more hours in the garden. I am hoping that 'The Crafty Creek' will have the same effect. Happy creating!
View all posts by craftycreeky →
This entry was posted in embroidery, Quilting, Serendipity and tagged Anderson's Farm, Quilting. Bookmark the permalink.