Posted on November 9, 2016 by craftycreeky

Over the last couple of weeks I’ve been trying to get a few projects finished, I’ve gifted one quilt and I’ve another two projects almost there, so I’m feeling pretty pleased at the moment. Along the way I’ve also managed to do a few Splendid Sampler blocks, they’re perfect on an evening after work when I don’t want to get a big project out. These are my favourites of the recent ones;

This is called Full Circle Star by Victoria Findley Wolfe. I must admit I put this off for a while as it did look complicated, I presumed it was a cathedral window in the centre, which I’d never done but when I actually read the instructions it was appliqued on. I cut the circles out with my smallest round die-cutter, they are slightly bigger than the pattern but it did mean they were nice neat circles! The points were meant to be done with three triangles however I really didn’t think I’d get them to square up so I decided to stitch them like half triangles on a square. It took a bit of working out and the first attempt had to be undone as I’d forgotten to allow for the bottom seam allowance so my two triangles had a gap in between! Second attempt came out fine. 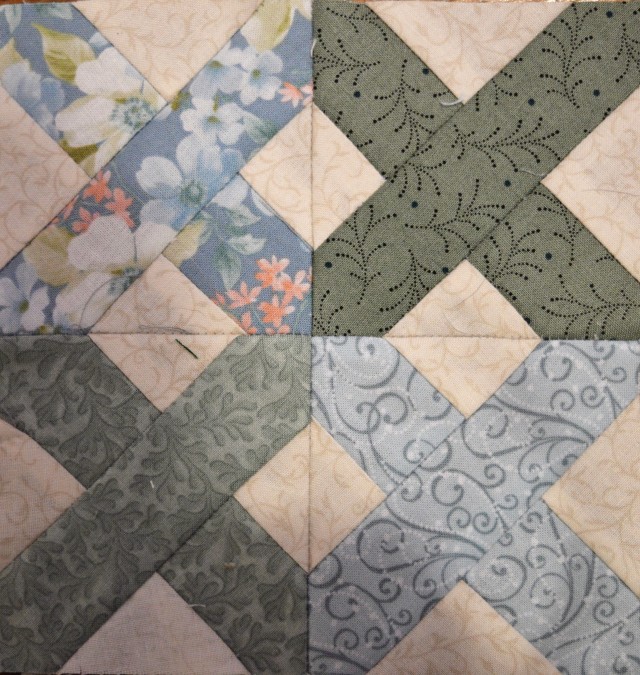 First Stitch is by Kerry Green, this is what she says about it; ‘This block reminds me of my sewing education. I learnt to sew at a young age through my mother and at school. I went to a progressive primary school where creative activities, especially sewing, were as much a part of our daily routine as reading, writing and number work. I still have my Binca canvas sampler needle book with the stitches sewn in knitting yarn from when I was in Mrs Bellfield’s class complete with the cross stitches that inspired this block.’

I love this block, I also started sewing very young, my mum was a primary school teacher who specialised in arts and crafts, I think she practised on us!! My first binca mat was when I was about 3 years old, just going round with different coloured running stitches. I discovered cross-stitch as a teenager with the Lanarte kits. This block was stitched with paper piecing, I’m really pleased how the colours have come out. 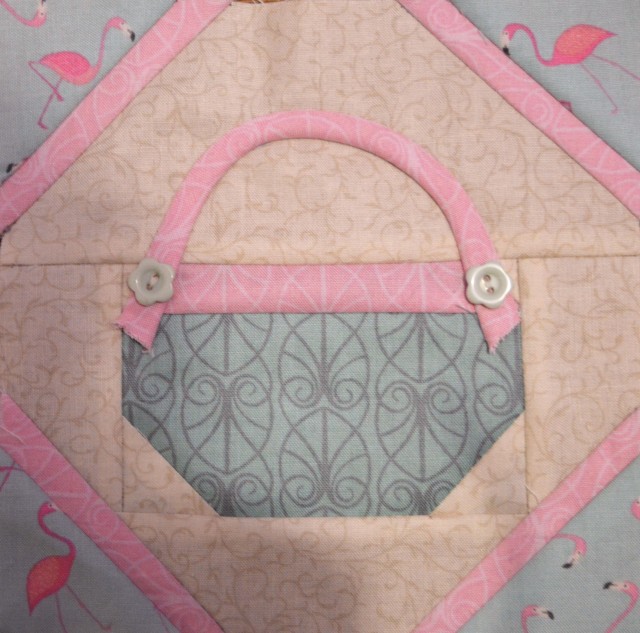 Button Basket is by Karen Costello Soltys. Isn’t it cute. I love baskets, I have a gorgeous handmade one I bought at Harrogate Spring Flower show, I use it  to go round the market when I’ve only a few things to pick up. If I’ve got a big market shop I take my wicker basket on wheels, Becky on the fruit and veg stall said she loves packing my baskets!

I even managed to quilt a few more blocks this week. I was beginning to worry about the number of blocks I’ve got to quilt but when I counted up I’ve already finished about twenty. They’re actually pretty quick to sew, particularly when I sandwich several in advance. It takes longer to decide how I’m going to quilt each design! I was particularly pleased with the little embroidered block as I managed to do a wavy line of loopy hearts and circles and it’s come out pretty well! The shell is quilted in the ditch for the main outlines and then across the shell back. For the cone flower I went around the flower initially as I didn’t want to spoil the blanket stitch, but I felt it still needed a bit more, so I went very carefully round each petal.

I’ve finished 74 blocks so far, so I’m nearly three quarters of the way through, just three outstanding at the moment…

Here’s a quick peep at another quilt I’ve almost finished, just stitching the binding down. I guesstimated how much binding I would need at five widths of the fabric, look how much I’ve got left… now that’s what I call a good guess!!

I live in a busy market town in Yorkshire with my husband, kids, dogs and chickens. I love trying new crafts, rediscovering old ones, gardening, walking...anything creative really I started this blog after my New Year resolution worked so well. My resolution (the first one I've ever kept!) was to post a photograph of my garden on Facebook every day. My hope was that I would then see what was good in the garden and not just weeds and work, which was my tendency. The unexpected side-effect was that I have enjoyed many more hours in the garden. I am hoping that 'The Crafty Creek' will have the same effect. Happy creating!
View all posts by craftycreeky →
This entry was posted in Quilting, Serendipity, Splendid Sampler Quilt and tagged Quilting, The Splendid Sampler. Bookmark the permalink.