Posted on November 2, 2016 by craftycreeky

All quilts are meant to have a name so after much thought I’ve named this one the Apothecary Cat Quilt, more about that later…

On Sunday our clocks went back an hour and the day seemed to go on and on! I got all sorts done, a bit of pruning in the garden, a bit of tidying up in the house and I managed to sandwich and quilt one of my current projects. I’m making this quilt as a well done gift for a young friend who after five years hard work qualified as a pharmacist in the summer. I used the disappearing four patch pattern, I showed the makings of the blocks here. It’s a fairly quick quilt pattern to make up once you get past the idea that you’re stitching all the blocks up only to cut them up and stitch them up again! The fabric is mainly from a range by the British company Lewis & Irene, I do like their fabrics, lovely designs and great quality. I particularly love the two passion flower ones and the bees are gorgeous too!

Having made the basic quilt I felt it needed a border, both to finish it and to make it a bit bigger, I found this fabric in Samuel Taylors, I love it, it’s in beautiful muted shades with dressmakers dummies (sort of!) I’m very tempted to get some more to make a shirt!

I sandwiched it on the lounge floor as usual as it’s the only place big enough, I do vac it first and then I pin the bottom layer into the carpet to keep it smooth! I had some double width ivory cotton in my stash which had been just waiting to back quilt like this. I use 505 spray adhesive to baste the three layers together, I love the look when it’s perfectly smooth on the floor. 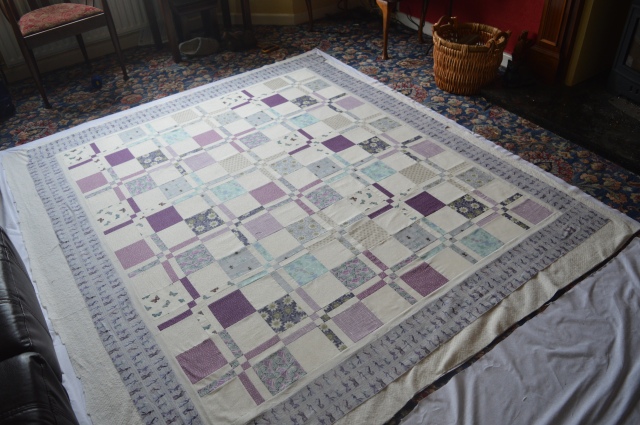 I decided with this quilt to quilt in the ditch which is where you just quilt along the seam lines, it should be pretty much invisible if you don’t wobble! I felt an all over design like I have done previously would have detracted from the quilt pattern, particularly with the extremes of light and dark. The quilting went fairly well, there’s the odd wobble and one crease underneath. I wasn’t sure whether the quilting lines were close enough together but having checked with the shop where I bought my batting I’m just within the limits, apparently different makes of batting do vary with their recommendations. I used a darker purple for the binding which finishes it off nicely. I hand stitched the binding down over a couple of evenings, then all that was left was to stitch the label.

I used one of the quilted squares on the back and embroidered the details in back-stitch with DMC variegated thread. 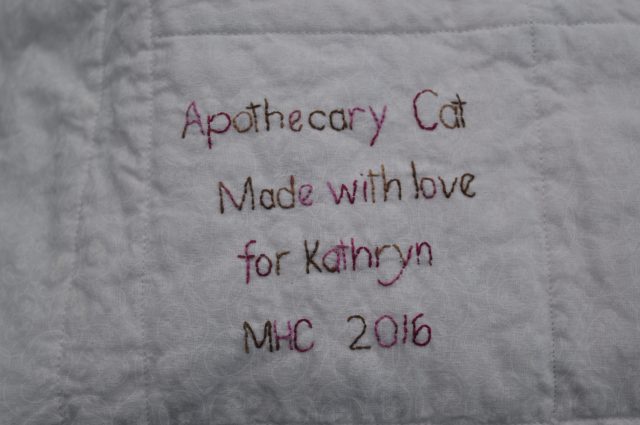 As I said at the beginning, it is traditional to name every quilt, I’ve been a bit lax so far, mainly because I couldn’t think of suitable names! I’m making a concerted effort now and including it in the label for posterity!

So why the ‘Apothecary Cat’ quilt? Well, apothecaries were the old chemist and pharmacists back in medieval times when they used herbs etc, the fabrics also fit in here as the flowers and bees would have all been of interest to the apothecary. Cat is a nick-name for Kathryn whose quilt it is. It also happens that as I was finishing the quilt their beloved 18 year old cat died, so it’s also named with a nod to Basil, a very cool cat. 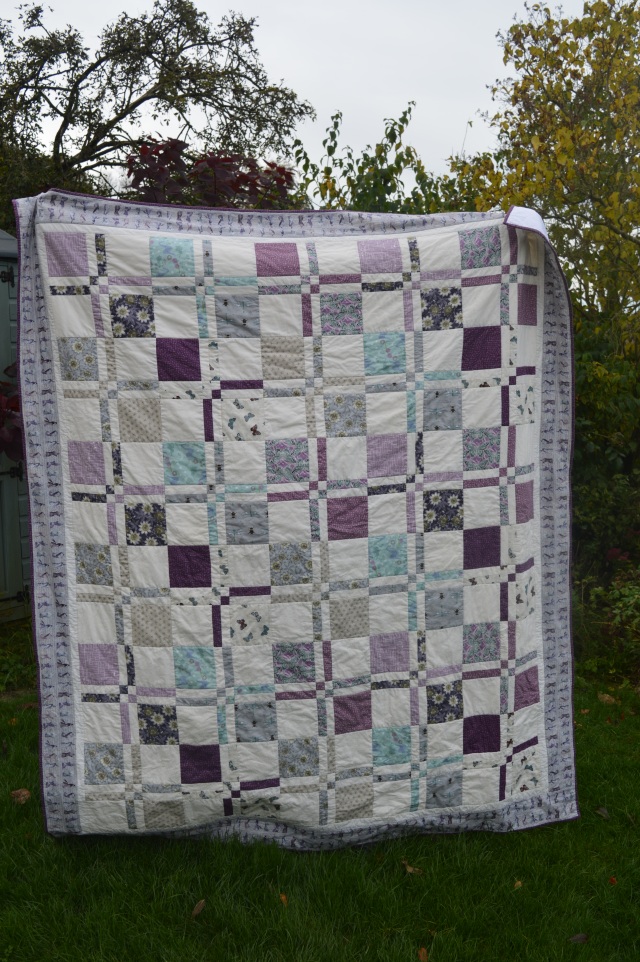 I live in a busy market town in Yorkshire with my husband, kids, dogs and chickens. I love trying new crafts, rediscovering old ones, gardening, walking...anything creative really I started this blog after my New Year resolution worked so well. My resolution (the first one I've ever kept!) was to post a photograph of my garden on Facebook every day. My hope was that I would then see what was good in the garden and not just weeds and work, which was my tendency. The unexpected side-effect was that I have enjoyed many more hours in the garden. I am hoping that 'The Crafty Creek' will have the same effect. Happy creating!
View all posts by craftycreeky →
This entry was posted in Quilting, Serendipity and tagged Disappearing Four Patch, Quilting. Bookmark the permalink.

15 Responses to The Apothecary Cat Quilt