Posted on October 7, 2016 by craftycreeky

The final block of My Secret Garden quilt-a-long was due out on 1st October. A few days before I decided to cut out a jacket, after all, I was up to date on all three quilt-a-longs…unfortunately Pat Sloan, the designer, had other ideas, she released the final block a few days early!!!

Well I couldn’t resist could I, so the jacket is cut out but unstitched!

The final block was fairly straight forward, which is probably why I made a major mistake! I needed a 5″ square to make the two large triangles, my die cutter only goes up to 4.5″ so it was a job for the ruler and rotary cutter. I have one fabric which was my starting point when choosing my palette at the beginning, it’s the dark aubergine coloured one with dark gold flowers. I’ve included it in most of the blocks to give a bit of continuity. I only had a small piece left, but I measured it and found I had just enough for all the triangles in the middle.Everything was going swimmingly until I cut one side to 4.5″!!! I realised the second I had done it and I definately didn’t have enough for a second 5″ square…so I pieced it along the bottom!!! Luckily you can hardly tell!

Pat designed a lovely deep border with 9 square cornerstones. Unfortunately I didn’t have a big enough piece of fabric to do the deep border and I was reluctant to buy any more. I decided to cut up my leftovers into 2.5″ strips, I stitched these together in groups of three and then trimmed them to 2.5″  squares so I could sew them altogether to have a scrappy border of squares round the quilt. I’m really pleased with the effect. I’m going to bind it in the dark green which will finish it off nicely.

I called into B&M fabrics in Leeds to get some backing. I spotted some dark cream patterned cotton which matched beautifully. When I was working out how much I need I was in a magical place where you could buy two metres, cut it in half to get double the width…but you still had two metres in length!!!….I know, it was a lovely place!!! The result being I only bought 2m to back a single quilt.

What a ninnie!!! As soon as I got home and looked at the piece I realised I didn’t have anywhere near enough. I had two options, I either delayed finishing the quilt until I could get back into Leeds, which could be another two weeks, or I pieced the back, so I chose the latter.

I pulled out every piece of fabric I had left from the quilt, plus all the leftover squares from the front. I arranged them on the back and had just enough to back the quilt. This pile is all I have left of all the fabric I started with!!

I think I rather like fancy backs! It adds another interest…and it uses up all the scraps too.

I sandwiched the quilt on my lounge floor, it’s the only place big enough. I’ve spray basted with 505, I love that smooth effect when you first baste the quilt top.

All I’ve got to do now is quilt it and bind it! 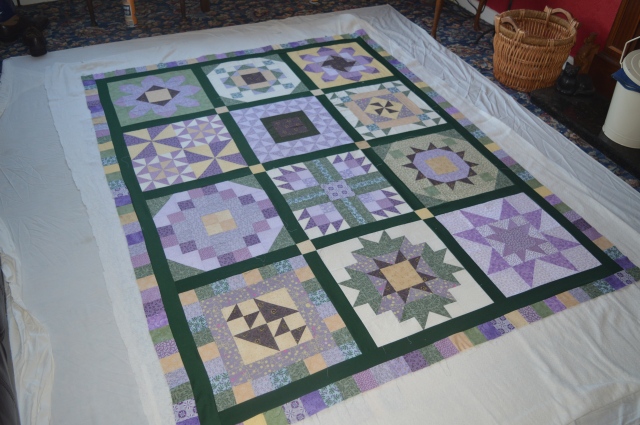 I live in a busy market town in Yorkshire with my husband, kids, dogs and chickens. I love trying new crafts, rediscovering old ones, gardening, walking...anything creative really I started this blog after my New Year resolution worked so well. My resolution (the first one I've ever kept!) was to post a photograph of my garden on Facebook every day. My hope was that I would then see what was good in the garden and not just weeds and work, which was my tendency. The unexpected side-effect was that I have enjoyed many more hours in the garden. I am hoping that 'The Crafty Creek' will have the same effect. Happy creating!
View all posts by craftycreeky →
This entry was posted in Quilting, Serendipity and tagged My Secret Garden, Quilting. Bookmark the permalink.

4 Responses to My Secret Garden Quilt