I’m on two weeks holiday from work at the moment, but I think I’ll be going back to work for a rest! I’m knee deep in decorating, my OH is away on Army Cadet Camp for a fortnight, so I decided to take the opportunity to redecorate our bedroom. It has been planned for a while but knowing how my OH hates the inevitable disruption I decided that was the time to do it. At the same time my son (who is a plumber) had a two week window when he could fit our new bathroom…oh and I’ve got a dinner party for about 12-14 friends on Saturday!

Currently our clothes are in the lounge, the furniture is in the office, the bathroom was emptied into the dining room, I’m sleeping in the spare room, so my sewing room has become my sanctuary in which to escape on an evening.

I’ve been catching up on some of my block of the month quilts and I’ve finally decided on the sashing for my Splendid Sampler quilt. I’ve been mulling ideas around for a while, there’s some gorgeous sashing ideas on the facebook page but I wanted to keep it reasonably simple (as there are 100 blocks!) and it had to be suitable for quilt as you go.

All the quilting I’ve done so far has been all over patterns, mainly meandering swirls. The nearest I’ve been to following the design of the quilt is James’s chevron quilt, where I stitched a different pattern down each chevron. For the Spendid Sampler quilt I want to quilt each block individually and as even without sashing it would measure 60″ square, I knew I had to do it using the quilt as you go method (QAYG).

I’ve never done QAYG before, Kate from Tall Tales from Chiconia has written a great tutorial on QAYG for beginners which has been a big help, it all makes sense now! I just need to sash and quilt my blocks.

For the sashing I’ve decided to use 1 1/2″ strips in a patterned ivory with a coloured square at each corner. I’m going to try and use mainly the fabrics from each particular block for the corner squares. The idea is that when I then join the squares together with a darker cream strip the coloured squares will be divided from each other. Hope that is making sense!

Well I’ve quilted two blocks! I’m backing them with pretty floral cottons and using spray basting to sandwich the batting between the layers. I’ve got lots of batting remnants so hopefully I’ll reduce that particular stash! 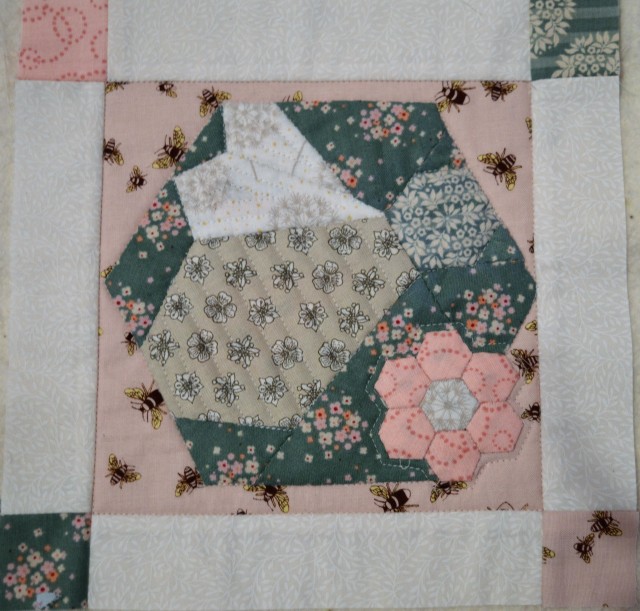 The first one I quilted was a block by Katya Marek called Bee Happy. It’s made with English paper piecing (the only paper piecing I knew of until I started this quilt!) so all the pieces were tacked around the pattern pieces and then over-stitched together. I’ve not done EPP with such tiny or irregular shapes before and it took a bit to realise that I didn’t actually need to have everything neatly tucked under like in applique. As long as I remembered which seam I was stitching, it all came out fine! The biggest problem I had with this block was stitching the finished hexagon onto the block. The bee is meant to be flying straight across. I didn’t have the picture with me when I stitched it. The first attempt had the bee flying downwards, I undid it and stitched it flying upwards, much more positive!. When I got home and look at the pattern I realised I’d positioned it sides top and bottom rather than points. It’s staying as it is!

I quilted round the bee and then quilted his stripes in. These were meant to be EPP fabric stripes but I chickened out of that one! I quilted his wings and the hexagonal flower. I’m keeping the quilting pretty simple so I don’t make the job of quilting 100 blocks overwhelming!

The second block I’ve quilted is called Twirl Time by Sarah J Maxwell. I quilted round the outside of the four point star, leaving the centre plain.

I’m really please with these two blocks, they didn’t take long at all once I’d worked out what I was doing…just got to quilt my other 48 blocks now 🙂

I’m linking up with Young Texan Mama for Sew Cute Tuesday, why not have a look what everyone else has been sewing?

I live in a busy market town in Yorkshire with my husband, kids, dogs and chickens. I love trying new crafts, rediscovering old ones, gardening, walking...anything creative really I started this blog after my New Year resolution worked so well. My resolution (the first one I've ever kept!) was to post a photograph of my garden on Facebook every day. My hope was that I would then see what was good in the garden and not just weeds and work, which was my tendency. The unexpected side-effect was that I have enjoyed many more hours in the garden. I am hoping that 'The Crafty Creek' will have the same effect. Happy creating!
View all posts by craftycreeky →
This entry was posted in embroidery, Quilting, Serendipity, Splendid Sampler Quilt and tagged English Paper Piecing, My Splendid Sampler, QAYG. Bookmark the permalink.

9 Responses to Sashing and Quilting