Along with other things I’ve been working on my quilt-along blocks this week. I’ve a friend who isn’t very well at the moment so I’m popping round once a week to help out, I usually take some sewing to do as it’s nice just to sit and chat in the conservatory with a bit of hand-sewing.

This week I took two projects along, the first was from The Splendid Sampler, block 41 to be precise. It’s designed by Jennifer Mathis of Ellison Lane, it was hexagons again, but much bigger than last time, there were just eight to make, two for the centre and the rest around the edges.

I decided to use some flamingo fabric I bought a couple of months ago as I felt colour-wise it fitted in with SS. I’d not used it up to now as it does need the right block to fussy cut it. This was the perfect block! I cut two blocks from each flamingo poise and positioned then opposite each other. 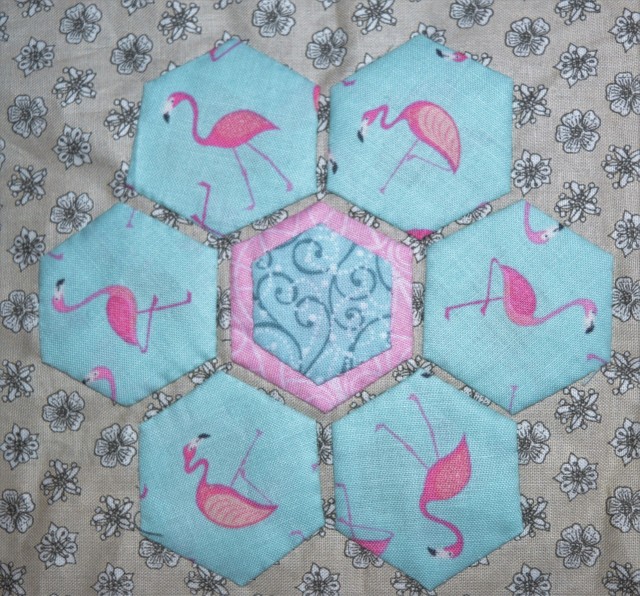 I tacked the fabric round the templates, pressed them and then hand-stitched them onto the main fabric after removing the papers. I actually found it more difficult to get a neat (accurate) finish than I did with the tiny hexagons I sewed a couple of weeks back!

‘Dashing by Chocolate’ was block 37, it was designed by Laura Flynn, it was nice to have a straight forward piecing block to do, all I had to worry about was which fabric to use, always a quandary! I decided it was the perfect block to fussy-cut my rabbits again, careful cutting of the green triangles also worked well. 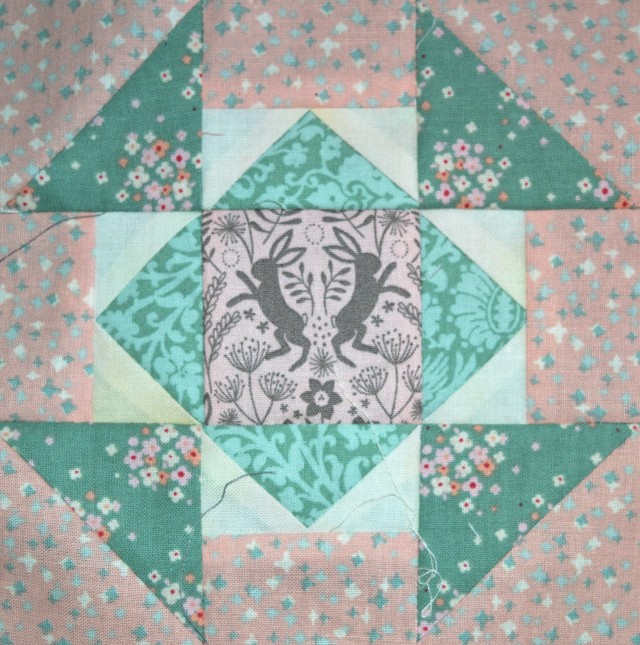 Last night there was a party going on somewhere in the neighbourhood, all I could here was the music, so I thought I may as well carry on sewing, particularly as I was Billy No Mates at home! I decided to start a block that I’ve been putting off for a while, well at least 2 weeks! It’s another paper piecing one but I think trepidation set in from the comments on facebook, this one clearly wasn’t going to be easy!!!! I stopped sewing just after midnight when the boom-boom stopped, I’d sewn a quarter of the block, please bear in mind this piece is only 3″ square!! Some of those cream triangles are minuscule!!!

The second piece of hand-sewing I started at my friends house was a block from Anderson’s Farm, it’s very sweet with three chickens on. I blanket stitched round all the pieces, with a few extra back-stitches on the wings, just got the rest of the embroidery to do now, maybe next week…I need to get get cracking though as I’ve just had an e-mail that the next block is on it’s way and I haven’t even opened last months yet!

Linking up with Kathy’s Quilts for Slow Stitching Sunday and Super Mom No Cape for Vintage Embroidery Monday.

I live in a busy market town in Yorkshire with my husband, kids, dogs and chickens. I love trying new crafts, rediscovering old ones, gardening, walking...anything creative really I started this blog after my New Year resolution worked so well. My resolution (the first one I've ever kept!) was to post a photograph of my garden on Facebook every day. My hope was that I would then see what was good in the garden and not just weeds and work, which was my tendency. The unexpected side-effect was that I have enjoyed many more hours in the garden. I am hoping that 'The Crafty Creek' will have the same effect. Happy creating!
View all posts by craftycreeky →
This entry was posted in embroidery, Quilting, Serendipity, Splendid Sampler Quilt and tagged Anderson's Farm, Quilting, The Splendid Sampler. Bookmark the permalink.