Progress on my Quilt Blocks

Over the last couple of weeks I’ve been steadily working away at my quilt blocks, both for the Splendid Sampler and the Anderson Farm quilt. Some of them were nice, simple, quick blocks, others took a fair bit of work or concentration…

I’ve been putting off doing block 26 of The Splendid Sampler since it came out in the middle of May! I’ve been dreading making the Dresden circle, it’s called ‘Dreaming of Dresden’s’ whereas to me it looked more like a nightmare! I finally decided to buckle down and stitch it! As usual it wasn’t half as complicated as I thought! I decided to fussycut the blocks, rather than stitching applique circles onto them which the design called for. The top corner was alot easier to make then I thought, it’s just stitched straight across and then turned, I was a bit worried when I stitched them altogether that it wouldn’t lie flat, it certainly didn’t look like it would, but I think pressing it allowed for a lot of leeway. I can’t say I’m enamoured to ever make anymore, but I’m pretty pleased with it!

Block 34 is called Lemonade, mine’s clearly a lime as I haven’t any yellow in my colour scheme! It’s my first try at stitching a curved block. I managed it with LOTS of pins, like I put nine pins in the seam that’s about 2″ long! It’s not perfect but it’s acceptable. 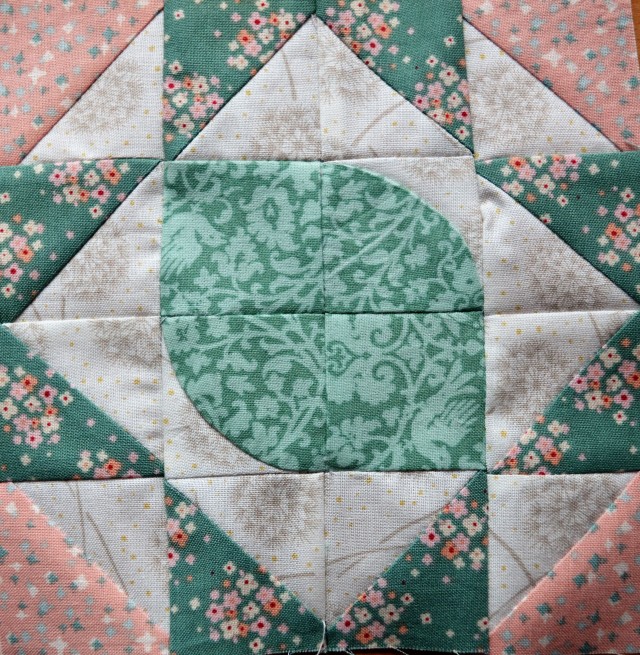 Over the weekend I’ve been stitching tiny hexagons…and I mean tiny! Block 36 was made with what is now called English Paper Piecing. It’s what I remember as a child of my mum stitching patchwork, tacking round a paper template. These hexagons are less than 2cm across and there are 42 of them. I’ve just got to remove the paper and stitch them onto a background square. My daughter recently inherited an old trunk and at the bottom of it is an unfinished paper pieced quilt, it’s probably at least 60 years old, I was interested to see what paper she had used and it looks like pages from school books! 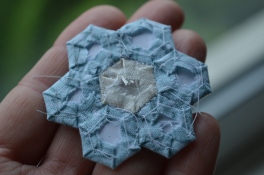 You may remember the traumas I was having with my Anderson Farm quilt and the applique. Well I remade the cockerel block with bondaweb and blanket stitch and I’m so much happier with it. I shall crack on with the two outstanding blocks now. Linking up with Kathy’s Quilts for Slow Stitching Sunday and Super Mom No Cape for Vintage Embroidery Monday. Why not have a look at all the hand sewing everyone else has been doing. 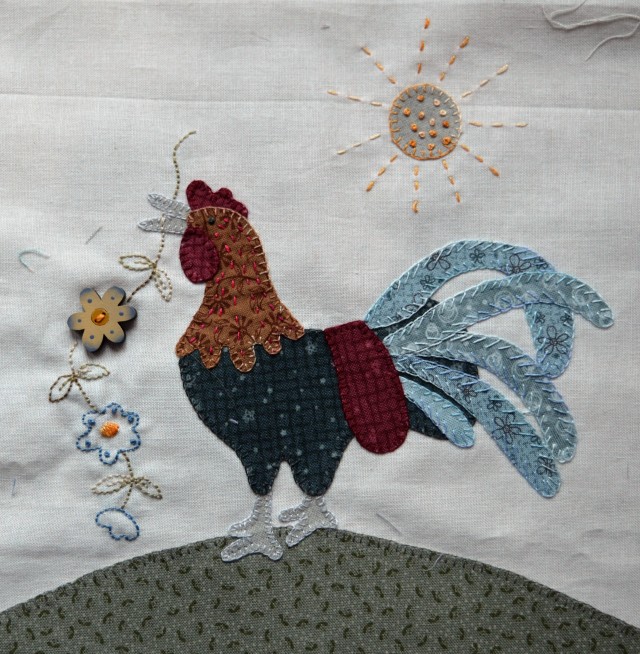 I live in a busy market town in Yorkshire with my husband, kids, dogs and chickens. I love trying new crafts, rediscovering old ones, gardening, walking...anything creative really I started this blog after my New Year resolution worked so well. My resolution (the first one I've ever kept!) was to post a photograph of my garden on Facebook every day. My hope was that I would then see what was good in the garden and not just weeds and work, which was my tendency. The unexpected side-effect was that I have enjoyed many more hours in the garden. I am hoping that 'The Crafty Creek' will have the same effect. Happy creating!
View all posts by craftycreeky →
This entry was posted in Quilting, Serendipity, Splendid Sampler Quilt and tagged Anderson's Farm, My Splendid Sampler. Bookmark the permalink.

5 Responses to Progress on my Quilt Blocks