Well we’re now eight weeks into the Splendid Sampler quilt along and it’s certainly pushing me out of my comfort zone! This week at home I’ve been doing lots of decorating and reorganising, I decided on Friday to have a rest day, otherwise known as a sewing day, so I caught up with my SS and I’ve got four blocks to show you;

Block 13 is a pinwheel design called Scrap Stars by Corey Yoda, I’ve not done a star shaped block before so I was really pleased with how well this one came out, I even managed to get my center nice and neat! 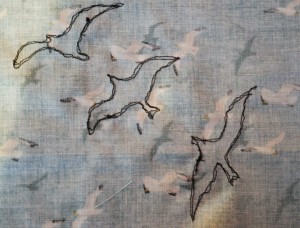 Block 14 is called Flying High, it was designed by Janet Clare and it is three appliqued seagulls. Now until I started this project I hadn’t done any applique on quilts, I’ve done a bit of needle-turn applique for earlier blocks, but I felt this was too fiddly for that. I decided to have a go at the ‘machine drawing’ technique, it’s a bit like hand-drawing round the shape with the sewing machine, it also means the stitching doesn’t have to be quite so perfect!

I’m fairly pleased with this block, I deliberately used a coordinating thread, rather than a contrast, just in case it didn’t work out! The back view actually shows the stitching better.

Block 15 was terrifying!! I put it off for several days, trying to pluck up the courage!! It’s called Family Affair and it’s made by foundation paper piecing. I never even heard of foundation paper piecing, let alone tried it. I read the instructions… re-read the instructions…watched the tutorial…it may as well have been in double dutch as I just couldn’t understand the process! After a couple of days of panic, I watched a tutorial by Alyssa Thomas of Penguin & Fish, she was making the actual block on line and showing us how to do it. It all suddenly clicked! It was a bit of a Eureka! moment…With foundation paper piecing the design is printed on paper and you position the fabric behind and stitch on the actual paper lines, apparently it’s a good way of achieving really sharp, narrow points. You don’t remove the paper until the end.

I took a deep breath and started my block. It did take a lot of concentration to make sure my fabrics were the right way round and big enough to cover the area. I made one section first to get the idea and hopefully make my mistakes on (that didn’t work, I still made them!) and then made the other seven like a production line. It took far longer than it should have done to realise that as four blocks were mirror images of the others, the scraps of fabric needed to be the other way round too!! 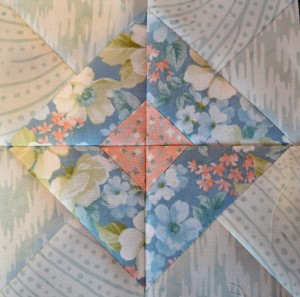 I did it! I felt like doing a happy dance!! It wasn’t half as bad as I thought, can’t say I’ll be rushing off to make a quilt like that, but at least I know the process now. My block isn’t perfect, but I’m proud of it!

Thursdays block, Pieces of Friendship by Lindsey Mayland, looked simple in contrast..deceptively so! It was one of those where it’s an easy block, but not so simple to get perfect, my seams don’t match as well as I would like, but they’re staying!

Today’s block has got 57 pieces…argghh

I live in a busy market town in Yorkshire with my husband, kids, dogs and chickens. I love trying new crafts, rediscovering old ones, gardening, walking...anything creative really I started this blog after my New Year resolution worked so well. My resolution (the first one I've ever kept!) was to post a photograph of my garden on Facebook every day. My hope was that I would then see what was good in the garden and not just weeds and work, which was my tendency. The unexpected side-effect was that I have enjoyed many more hours in the garden. I am hoping that 'The Crafty Creek' will have the same effect. Happy creating!
View all posts by craftycreeky →
This entry was posted in Serendipity. Bookmark the permalink.