My Vacation Time quilt is finished, it’s quilted and bound, just got loose threads to trim and it’s ready for giving at Christmas!

I started this quilt in January as it’s a Block of the Month designed by Pat Sloan. At the beginning of each month she released instructions for another block on her website. This month we got the instructions for filler blocks and putting it all together. It’s been a great learning experience, I can see the improvements in my blocks as the months go by. I made the quilt with fabrics from my stash, some of them probably getting on for 25 years old. As the quilt was a surprise one, I didn’t know if I would like it so I didn’t want to spend a fortune on fabric on a quilt I may not like. I ended up having to buy one length of dark blue cotton from Samuel Taylors, as I didn’t have enough dark fabric for the last border and the binding. The backing is from leftovers too, I’ve used three different cottons going from light blue to dark, I like the effect.

Over the weekend I quilted it. Now I’m pretty new to quilting on my machine and this is certainly the biggest one I’ve tackled so far. I got quite a few tips at the WI Centenary Fair as I went to a talk by Stuart Hillard of the Great British Sewing Bee. He was so enthusiastic and helpful when we went and chatted afterwards. He got me onto spray basting and I’m definitely converted!

In the past (like two others!) I’ve hand tacked the layers of the quilt (backing, wadding and top) before quilting it, it was never perfect, the loops of the tacking stitches would get caught…He reassured me that with spray basting you can adjust it until you’re happy, so I tried it. It was so much easier to get a smooth finish and it held it firm throughout quilting. 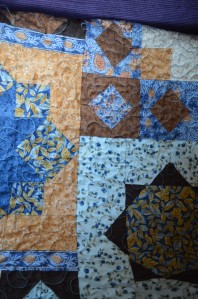 This is only my third attempt at free motion quilting and the other two were much smaller! I decided that my wobble point is when I have to stop stitching to change my grip, so I decided to stitch a design round the border that was like waves that ended with a point! It meant I could stop at the point and it wasn’t so obvious if I had a wiggle! By the time I got to the centre area I gained a bit more confidence so I quilted in a meandering pattern. You can guarantee that any major wobble would be when I was stitching over a dark square so it showed up, it’s a bit like butter-side down! Half way though the quilting my sewing machine decided to breakdown! I think the timing has gone as the needle goes down at the wrong time! It must be in the same union as my overlocker, a sympathy strike (looks like my dishwashers in the same union as that’s broken down too!!) I swapped over to my spare machine which was my mothers sewing machine, luckily it’s identical to mine. I think it’s a bit shell-shocked though after 10 years retirement sitting on a shelf to stitching all weekend! I’m pretty pleased with my quilting, I’ve got a Craftsy class on FMQ waiting to watch as soon as I get a new computer (that has sound!!)

I was amazed how much thread you use quilting, this is not densely quilted at all, but I filled bobbins two at a time and I went through five or six altogether! I’d love a sewing machine that alarmed when I was about to run out of thread, a 6″ to go alarm, it can’t be too difficult!

I bound the quilt with what I think is called the double fold method, 2 1/2″ strips, folded in half before stitching on and folding over to get a 1/4″ bound edge, it sounds like it would be really bulky, but in reality it’s not, it makes a nice edge. I always hand stitch the binding down. I know a lot of quilters hate binding quilts, but as I’m still pretty new to this I enjoy it as the last piece of stitching for the quilt. It may take a while to hand-stitch right round a quilt, but I also don’t trust myself to machine stitch it neatly, I would hate to ruin a quilt on the last stage for the sake of a couple of hours hand-sewing!

I took my sewing machine to the repair shop today in Leeds Market, yes the same one I took my overlocker to last week! it’s not good when the sales staff in a repair shop greet you by name! Great service though, my overlocker was ready to  collect 🙂 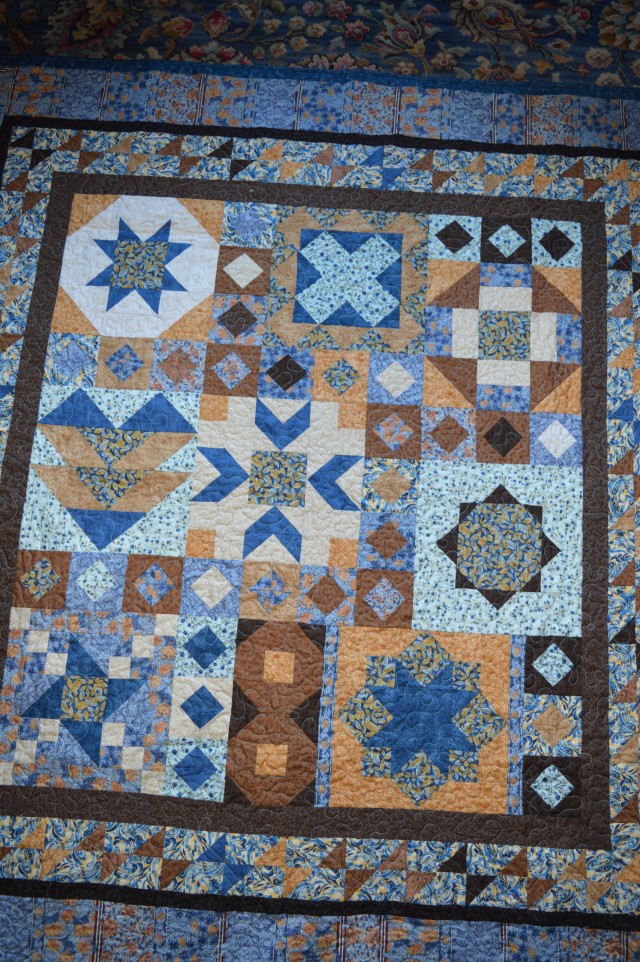 I live in a busy market town in Yorkshire with my husband, kids, dogs and chickens. I love trying new crafts, rediscovering old ones, gardening, walking...anything creative really I started this blog after my New Year resolution worked so well. My resolution (the first one I've ever kept!) was to post a photograph of my garden on Facebook every day. My hope was that I would then see what was good in the garden and not just weeds and work, which was my tendency. The unexpected side-effect was that I have enjoyed many more hours in the garden. I am hoping that 'The Crafty Creek' will have the same effect. Happy creating!
View all posts by craftycreeky →
This entry was posted in Quilting, Sewing and tagged Pat Sloan, Quilting, Vacation Time. Bookmark the permalink.

8 Responses to Quilting and Binding