Posted on November 7, 2018 by craftycreeky

Last time I showed it to you I was waiting, rather impatiently, for the border and binding fabric to arrive.

As soon as the postman came with a squishy I set too to get it finished. I decided to make a 3″ border in green so it would hopefully follow on from all the squares being multiples of three inches. Once it was stitched I could press and sandwich the quilt.

The backing is a creamy patterned cotton, it’s in gentle stripes but luckily I don’t think they are so noticeable that I had to worry about them being straight along the edges. I pinned it to the lounge floor and spray basted the wadding and the quilt top.

I decided to keep the quilting fairly simple with diagonal squares which I hoped would work well with all the half square triangles. I did debate for quite a while where to start as the lines would be on every other square. In the end I decided to centre it on the star in the middle, so all the points of that star are quilted. I stopped just before each hummingbird, stitching a square into the block if it fitted. At the beginning I used a hera marker to draw the diagonal quilting lines, especially on the 6″ squares, but in the end I just eye-balled it! It quilted pretty nicely, though there are a couple of little tucks on the back.

I felt it still needed a bit round each bird as some of the blocks were just too big to leave without. I decided to use my free-motion foot to stitch in the ditch around each bird. It nicely gives them a bit of relief too. I thought the detailed pink bird would be pretty tricky, but actually it was fairly straight forward to go round all the feather tips, easier than the straight lines on others!

For the border I stitched a sort of three leaf pattern on every other seamline with an arc inbetween, it worked well, not too difficult and looks effective.

Once the quilting was complete I trimmed the edges and stitched the binding round. I always hand-stitch the binding down on my quilts, it takes a while, like a couple of evenings, but I can sit and relax and let my mind wander! I think it gives a much nicer effect.

The last stitching to do was to embroider a label on the back with the quilts name and my initials. Every quilt needs a name, it took me ages to get into the hang of this but I quite like naming them now, it sort of comes to me as I’m stitching! This one is called A Quiet Charm. I learnt whilst making the quilt that the collective noun for hummingbirds is a charm. This was also my first attempt at a ‘low volume’ quilt, as in quiet, soft colours, nothing jumping out or contrasting too much, apart from the hummingbirds. 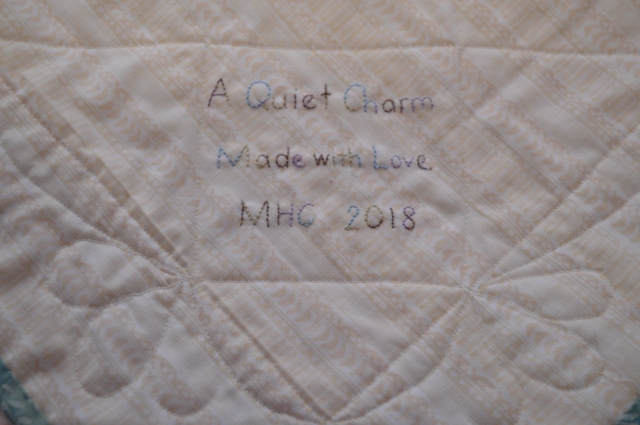 This quilt is for my niece, she moved house with her husband in the spring and now she’s expecting, so I’ve a baby quilt to make next! This quilt is for the guest room where there is hummingbird wallpaper.

I’m really pleased with this quilt as it’s the first one I’ve designed myself, obviously the hummingbird patterns were bought but otherwise I sort of made it up as I went a long. I like the effect of the low volume fabrics too. This was the nearest I could get to a whole quilt photo, I stood on a stool in the conservatory to get the natural light but the ceiling wasn’t high enough!!

I live in a busy market town in Yorkshire with my husband, kids, dogs and chickens. I love trying new crafts, rediscovering old ones, gardening, walking...anything creative really I started this blog after my New Year resolution worked so well. My resolution (the first one I've ever kept!) was to post a photograph of my garden on Facebook every day. My hope was that I would then see what was good in the garden and not just weeds and work, which was my tendency. The unexpected side-effect was that I have enjoyed many more hours in the garden. I am hoping that 'The Crafty Creek' will have the same effect. Happy creating!
View all posts by craftycreeky →
This entry was posted in Quilting, Serendipity and tagged Binding, Hummingbird Quilt, Hummingbirds, Quilting. Bookmark the permalink.

33 Responses to A Quiet Charm