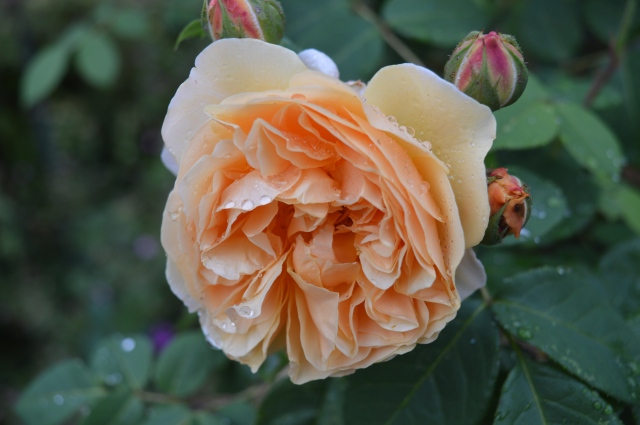 Isn’t this a gorgeous photo – raindrops on roses! Yes, it rained today!!!  I didn’t even grumble when I got wet taking these photos for Monday’s Meander Round the Garden, I was even humming the song from The Sound of Music…I am writing this to the sound of rain beating down on the roof and thunder and lightening rumbling round, and it sounds wonderful!

Over the weekend I finally got round to painting the summerhouse. It was well overdue as it was starting to have more of a shed feel than a summerhouse, a bit cobwebby and flaky paint! My OH cleaned all the algae of the bottom last weekend with a power washer, I just needed to crack on and paint it. I was also concerned that I would prevaricate for too long and the good weather would break. I’ve stuck to the same sort of colour, it’s called Willow, basically a soft green. I used a different make this time and it went on beautifully. The outside has had one coat, I still need to paint the inside and then give the outside a second coat with whatever is left. The inside is going to be Elderflower colour. I even cleaned the windows! I’m well chuffed with how the summerhouse looks now, we bought it as a wedding present to ourselves back in 2007 so it’s eleven years old, but it doesn’t look it now, well it won’t once I finish the inside, then we’ll have the great unveiling! 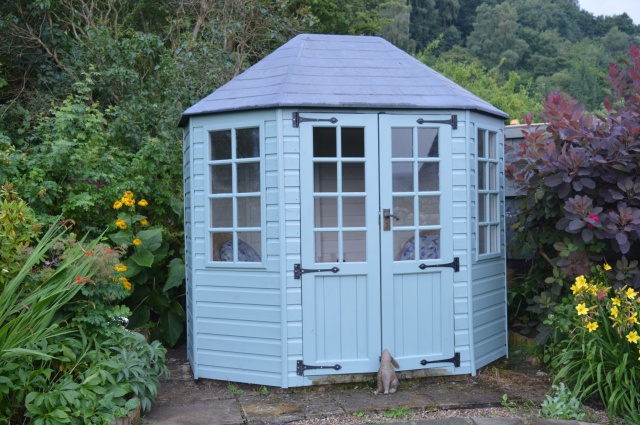 The big red crocosmias (Lucifers) next to the pond are just starting to flower, they’re starting to get a bit thuggish, but once things have died down in the winter when I’d like to move them I can never work out what’s crocosmia and what is iris! The huge inulas behind the summerhouse are getting bigger, having cleared a way through for my OH a week before, I had to tie everything back to get in to paint! 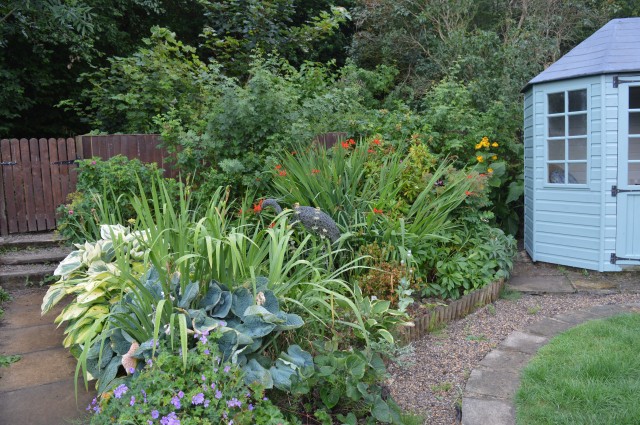 This orange crocosmia is one I bought at Harrogate Show a couple of years back, it seems more restrained that most and it has gorgeous big orange flowers, well big for a crocosmia! At the moment it’s down by the patio as I missed it when I was moving everything back up to the AA garden…another job for the autumn. 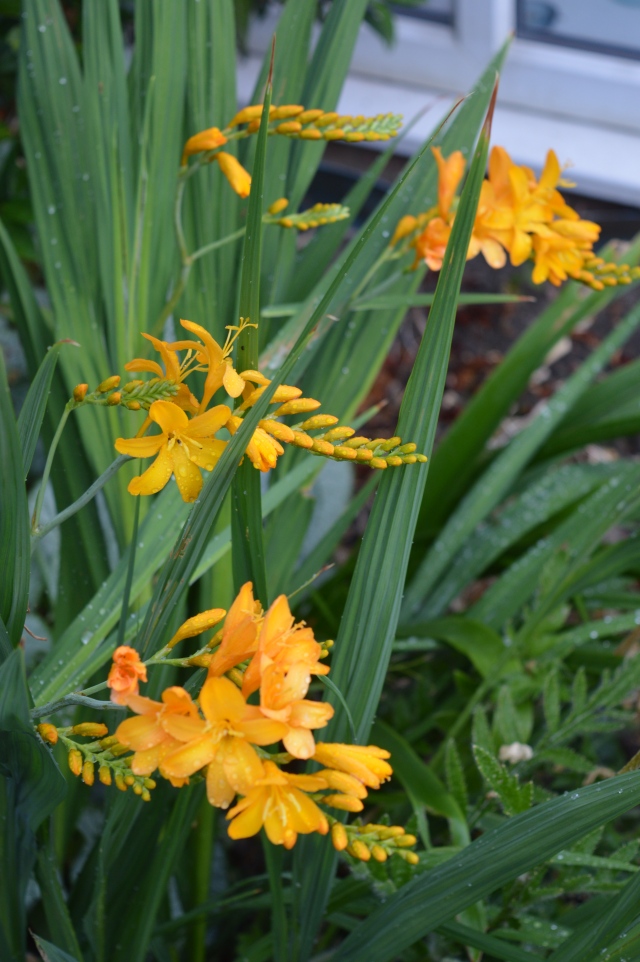 We’ve had lots of self seeded poppies this year, lovely shades of pink and purple. Just look at all the seed heads! 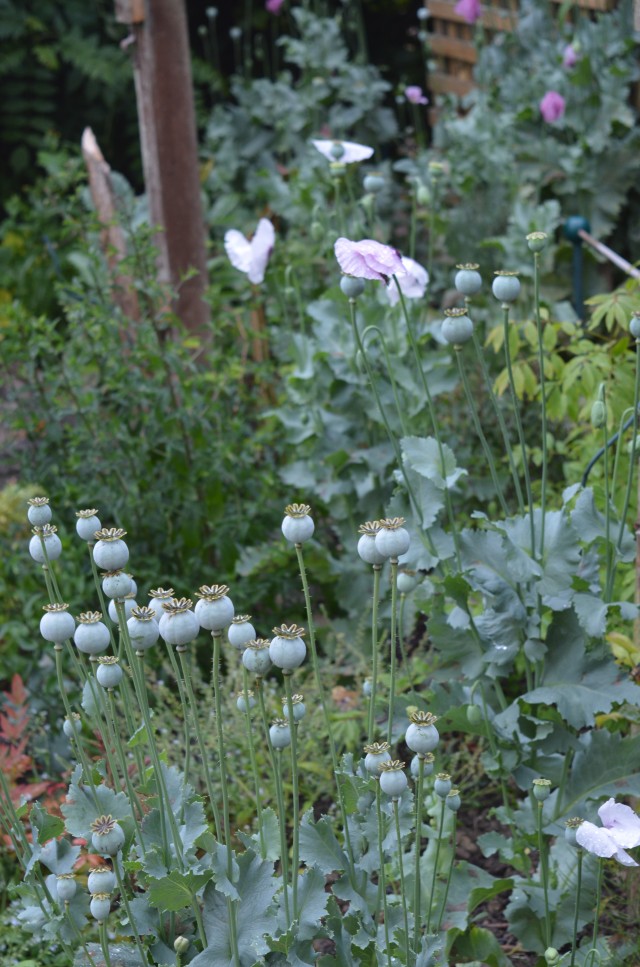 We’ve a beautiful golden smoke bush in the front garden, (Cotinus Coggygria) it’s ‘smoky’ plumes are just starting to appear. The purple version is fairly common, we’ve got two ourselves including a lovely one next to the summerhouse. I think the golden one deserves to be grown a lot more, it’s beautiful for three seasons out of four, so it certainly earns its keep. 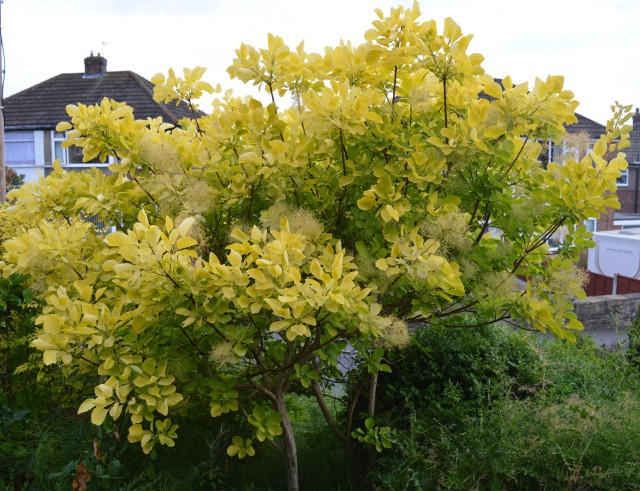 I think tomorrow, after this lovely rain,I’ll be planting out all the plants I’ve been trying to keep alive during this dry spell, get them in quick whilst I can!

I live in a busy market town in Yorkshire with my husband, kids, dogs and chickens. I love trying new crafts, rediscovering old ones, gardening, walking...anything creative really I started this blog after my New Year resolution worked so well. My resolution (the first one I've ever kept!) was to post a photograph of my garden on Facebook every day. My hope was that I would then see what was good in the garden and not just weeds and work, which was my tendency. The unexpected side-effect was that I have enjoyed many more hours in the garden. I am hoping that 'The Crafty Creek' will have the same effect. Happy creating!
View all posts by craftycreeky →
This entry was posted in Garden, Serendipity and tagged cotinus coggygria, crocosmia, summerhouse. Bookmark the permalink.

17 Responses to Raindrops on Roses