A Phoenix in Flight

It’s my Embroiderers Guild meeting on Monday so I thought I’s better get cracking with my entry for this months Travelling Sketchbook.

With the Travelling Sketchbooks we each start an A5 sketchbook, covering it, choosing a theme, write and introduction and put in a couple of embroideries to start it. We then swop books within a little circuit so everyone stitches a little piece for each book. It’s certainly pushed me in creative embroidery as I just have to think what and how I’m going to create something.

Some themes are easier than others, last months was ‘Down the Microscope’ which I found really tricky, I bent the theme slightly with my image of Carto, a computer generated image we use in the Cardiac Catheter Labs at work. 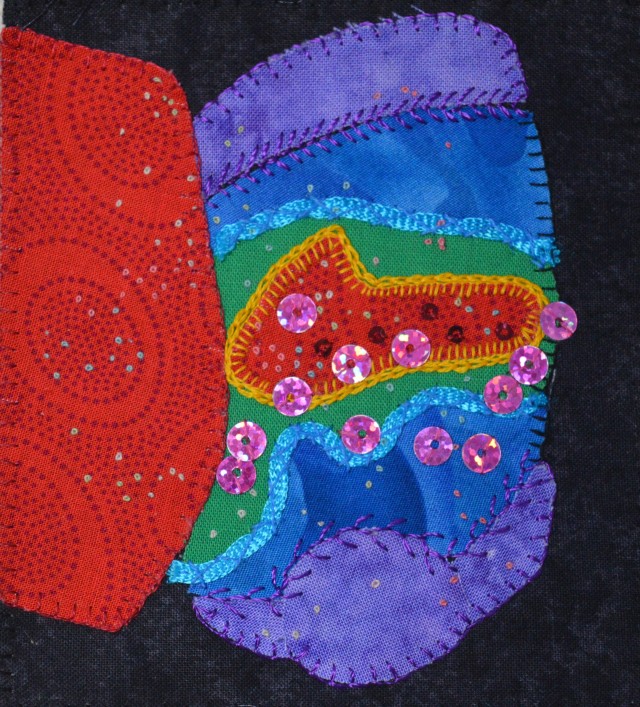 This month wasn’t much easier, particularly as I couldn’t find many little embroideries on Pinterest to give me ideas! The theme this time is Mythical Beasts! Dragons had already been stitched so I couldn’t do those! I don’t know many mythological beasts, unicorns, pegasus…

Then I came across a picture of a phoenix, the bird that dies in a show of flames and then is reborn from the ashes. Most of the pictures of a phoenix were actually tattoos, but it gave me ideas for shapes etc. I sketched a quick shape of a bird flying up with a long floaty tail. That was the basis of my design.

In my stash I found some taffeta-type fabric that was pink on the warp and bright yellow on the weft. It was a bit fiddly but I cut out a tiny birds body out of bondaweb, ironed it on the taffetta and then trimmed it so I still had the fabric attached for tail and wings. I then frayed the fabric back so i had gold threads fanning out for the tail and wings. I ironed it on to some grey marbled cotton and I was quite impressed with myself at this point! Quite arty-farty for me 🙂

A little bit of me was tempted to leave it at that, as I actually think it looks quite effective, but I decided I really ought to do some embroidery over it! To start with I just did some feather stitch over it to help stabilise the threads.

I then started adding embroidered plumes, I started off with a simple stem stitch, but that would have taken for ever and ever to get any effect, I couched some thread and then tried couching some woven ribbon twisting it and stitching it down with beads. Basically my threads and fibres were getting thicker and thicker as I tried to fill the space! I added straight stitches and fly stitches too in various threads too.

For the wings I mainly used chain-stitch with feather stitch in between. I added some chain stitch to the tail to help bring it all together.

At this point I had very little embroidery on the body, just a few straight stitches. I used a variegated DMC thread to embroider fly stitches overlapping on his body, which did look to be just enough. I added a french knot for his eye and a fly stitch for his beak and my phoenix was ready to fly!

As an embroidery I’ve had to completely think up myself, I’m pretty pleased with this one! He’s pretty bright and a bit gaudy, but so is a fire! He reminds me of those Rio carnival dancers!

I live in a busy market town in Yorkshire with my husband, kids, dogs and chickens. I love trying new crafts, rediscovering old ones, gardening, walking...anything creative really I started this blog after my New Year resolution worked so well. My resolution (the first one I've ever kept!) was to post a photograph of my garden on Facebook every day. My hope was that I would then see what was good in the garden and not just weeds and work, which was my tendency. The unexpected side-effect was that I have enjoyed many more hours in the garden. I am hoping that 'The Crafty Creek' will have the same effect. Happy creating!
View all posts by craftycreeky →
This entry was posted in embroidery, Serendipity, The Travelling Sketchbook and tagged embroidery, Phoenix, Travelling Sketchbook. Bookmark the permalink.

10 Responses to A Phoenix in Flight