The difference of a year and a BOM

So far I’ve managed to keep up to date with the new Splendid Sampler quilt-a-long, though it’s less arduous this time with only one block a week at the moment. It’s a quilt-a-long organised by Pat Sloan and Jane Davison, with 80 other designers each designing one block, so there’s lots of different styles and techniques. I made the first Splendid Sampler and learnt lots, so I decided to try and make this one too.

I’m aiming to make two throw size quilts to go in our dining room, I seem to have acquired a large selection of soft blues and greys, so that’s what I’m using. I’m aiming just to use this stash and not buy any more, or at least use it all up!

I showed you the first block a couple of weeks ago. It was a pretty straight forward pieced block. I decided to sash and quilt it as I go, keeping the sashing a simple log cabin design. I’m also using the same fabric that a block is sashed with to back it too. Last time I had a mix of pretty floral backs and plain cream, I really ike the effect but it was tricky placing them all as not only did I have to be happy with the front arrangement, the back had to be correct too! This way should be easier as they are both the same. 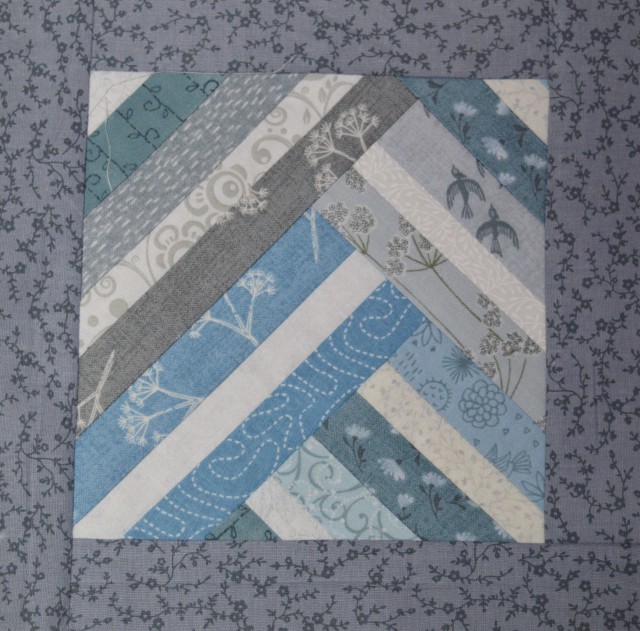 It’s amazing the difference a good block of the month can make, I usually choose my BOM’s around what I want to learn, particularly if I’m paying for it. After making the Splendid Sampler last time and also Lynette Anderson’s quilt, I wanted to learn how to do applique, so I joined Sarah Fielke’s Down the Rabbit Hole BOM.

The second block is by Rebecca Bryan, it’s called Milk and Cookies, though in my colour scheme I think I’ll rename mine Summer Moon! It’s a Dresden circle appliqued on a pieced square. Before the DTRH quilt I would have bondawebed the centre circle and buttonhole stitched round and I would have been in a bit of a tiz over the Dresden circle. Twelve months later and I did needle-turn applique without thinking about it!

I finally managed to watch all the Leah Day tutorials on my Craftsy account, I was very impressed, learned lots and now I’m going to practise on my little squares. I finally got the hang of bringing the bobbin thread up so I don’t get a birds nest underneath! I also like the way she travels along stitch lines so you don’t have to keep stopping a starting, this is also helped by using the fmq foot even for straight lines. For this block I just quilted in the ditch around the moon and the sashing and then did a meander over the rest. 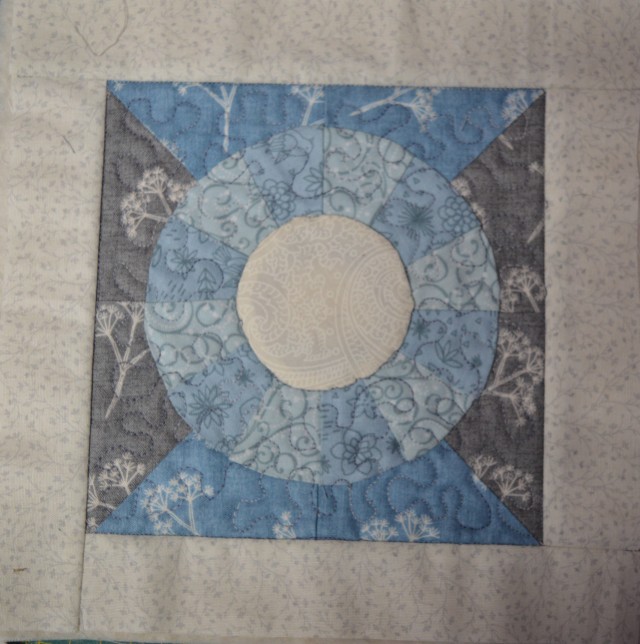 The third block was a bit more tricky, clam shells! Well I’ve done them, I used Sarah’s method of tinfoiling the fabric round a template for pressing and then appliqued them all. It’s not perfect and I can’t say I’ll be rushing to do them again, but I’ve tried it. The little embroidery at the top was definitely the easy part.

I quilted this with two patterns I learned from Leah’s class, a meandering clover around the flowers and an echo around the clam shells. Hopefully my stitch will improve as I get used to the different patterns. This whole block was quilted in one continous line which also means less threads to hide, so hopefully I’ll be a bit better at not leaving threads all over the place. 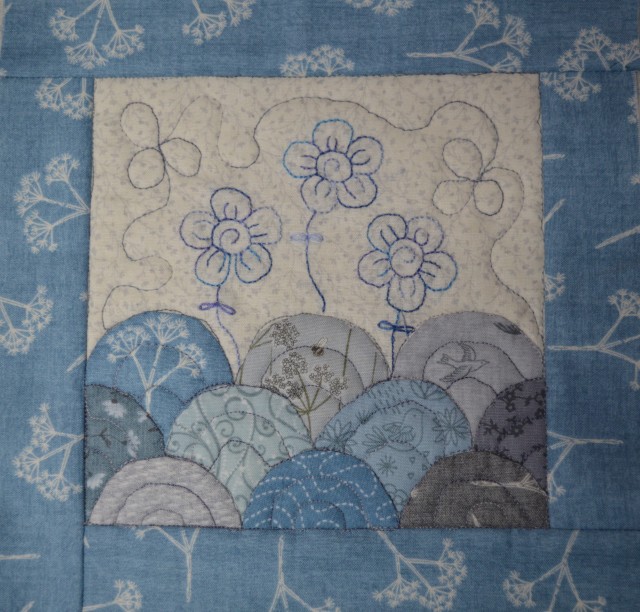 The next block is out tomorrow, so we’ll see what that one brings 🙂

I live in a busy market town in Yorkshire with my husband, kids, dogs and chickens. I love trying new crafts, rediscovering old ones, gardening, walking...anything creative really I started this blog after my New Year resolution worked so well. My resolution (the first one I've ever kept!) was to post a photograph of my garden on Facebook every day. My hope was that I would then see what was good in the garden and not just weeds and work, which was my tendency. The unexpected side-effect was that I have enjoyed many more hours in the garden. I am hoping that 'The Crafty Creek' will have the same effect. Happy creating!
View all posts by craftycreeky →
This entry was posted in Quilt-a-long, Quilting, Serendipity, Splendid Sampler Quilt and tagged Splendid Sampler 2. Bookmark the permalink.

13 Responses to The difference of a year and a BOM