Over on Pintangle Sharon has started a new series of TAST, 100 stitches to learn with one released each Tuesday. I’ve based my stitch sampler on the last TAST list so I’ve been trying to do the ‘Beyond TAST’ where she gives us a stitch or a family of stitches to develop a bit further over a month or so. The first month was running stitch and I was quite amazed how much I managed to do with simple running stitch.

The second month was ‘Isolated Stitches’, I’d been trying to work out where to include all the little odd stitches in my sampler book so here was my opportunity to put them all on a double page spread of Knots and Crosses! Apologies for the pun, it came to me half way through the flight to Australia!

I started with a tree of french knots, I’ve admired these on pinterest for ages so it gave me an opportunity to stitch one. Under the tree is a little row of straight stitches. I then tried three bullion roses, and a row of colonial knots. These are very similar to french knots, they’re formed in a different way which takes a bit to get your head round, but somehow they do seem to sit a bit neater. Pistil stitch is a bit like french knots on a stalk, so it was perfect for a seed head type of embroidery. I just managed to record our height before we started the descent to Adelaide.

Adelaide is a lovely city, not too big for a non-city person like me! We had a day wandering around, along the river, up to the Botanical Gardens and of course a glass of wine in the wine museum! It was Adelaide Festival weekend so there was all sorts of music and entertainment on the streets. There was even an air display of  jets doing loop the loop etc, this was a bit of a surprise to us as here in the UK, due to a couple of serious accidents, all air displays have to be over the sea, we can have a fly past over the cities but certainly no acrobatics.

The next block of stitches are Danish knots, sheaf filling, palestrina knot and Sorbello. Underneath is a woven spider web and a ribbed web, I really like the ribbed web. The bottom row are four-legged knots which really is like a knotted cross-stitch.

From Adelaide we drove down to the pretty town of Robe, where the sea was a beautiful mix of turquoise, jade and azure blue. After stretching our legs along the sea front we headed down to Portland for our first stay in an Air B&B. We had booked three nights in Air B&B’s, each very different but all great.

Before leaving the area we drove down to Cape Bridgewater to see the blowholes and the Petrified Forest. These look like fossilized trees but it’s actually just limestone eroding away. As I looked at the ‘trees’ I did think it would be an amazing theme for an embroidery, not sure it’s within my ability but it was an interesting thought!

The final group of stitches on this pages are detached wheatear (Tete-de-boeuf stitch), crown stitch and tulip stitch. I stitched this page with DMC 4514 which is pretty shades of jade, purple and pink. I think with hindsight I would have been better with a more ‘flowery’ colour, just because I ended up stitching  quite a few blossoms and flowers.

I stitched all the ‘crosses’ as we made our way along the Great Ocean Road to Sydney, but I’ll leave that for another post 🙂 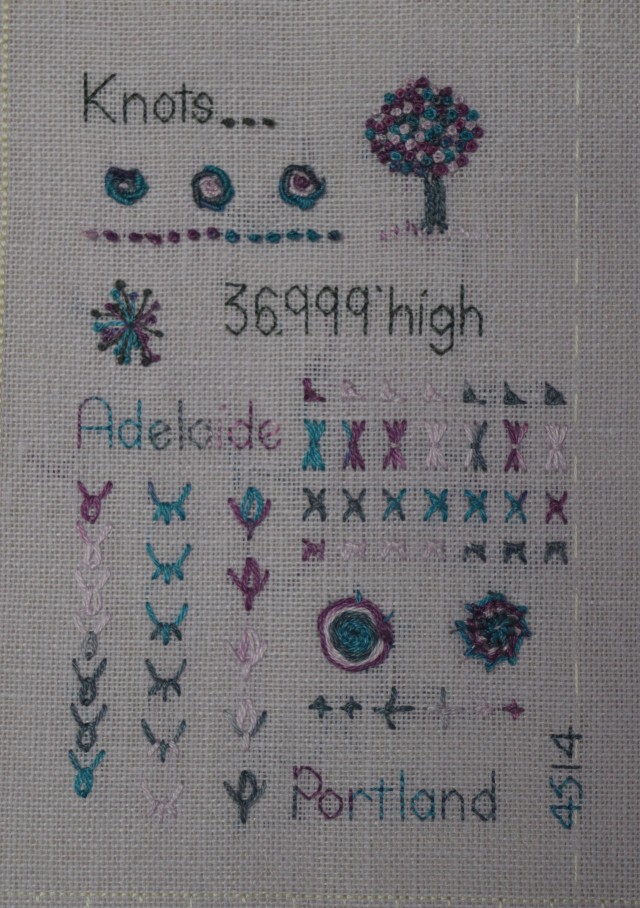 I live in a busy market town in Yorkshire with my husband, kids, dogs and chickens. I love trying new crafts, rediscovering old ones, gardening, walking...anything creative really I started this blog after my New Year resolution worked so well. My resolution (the first one I've ever kept!) was to post a photograph of my garden on Facebook every day. My hope was that I would then see what was good in the garden and not just weeds and work, which was my tendency. The unexpected side-effect was that I have enjoyed many more hours in the garden. I am hoping that 'The Crafty Creek' will have the same effect. Happy creating!
View all posts by craftycreeky →
This entry was posted in embroidery, Serendipity, TAST, Textile Books and tagged Beyond TAST, Embroidered knots, stitch sampler, textile book. Bookmark the permalink.

8 Responses to Knots and Crosses