Paper Piecing for The Splendid Sampler

I’ve stitched three blocks for my Splendid Sampler quilt in the last couple of weeks with foundation paper piecing. Until I started this quilt-a-long I didn’t even know what FPP was, so I still get a little glow of achievement when I stitch another one!

The first one is called ‘Balls in the Air’, it’s designed by Aylin Ozturk. I’ve been putting it off since the end of June as it did look complicated! The overall effect is of a circle, but it is made from some teeny triangles, and I mean teeny!! I’ve taken a close-up photo so you can see just how teeny!! I like FPP but I do find it a bit wasteful on the fabric front, having stitched a quarter of the ball I was seriously worried that I wouldn’t have enough background fabric to finish the block. I worked out a new way of avoiding quite so much waste, rather than cutting out a piece that I knew would be big enough I positioned the seam onto a straight edge of the fabric piece, stitched it, pressed it, and then cut the fabric off the main piece. It seemed to work pretty well…and I didn’t run out of fabric! 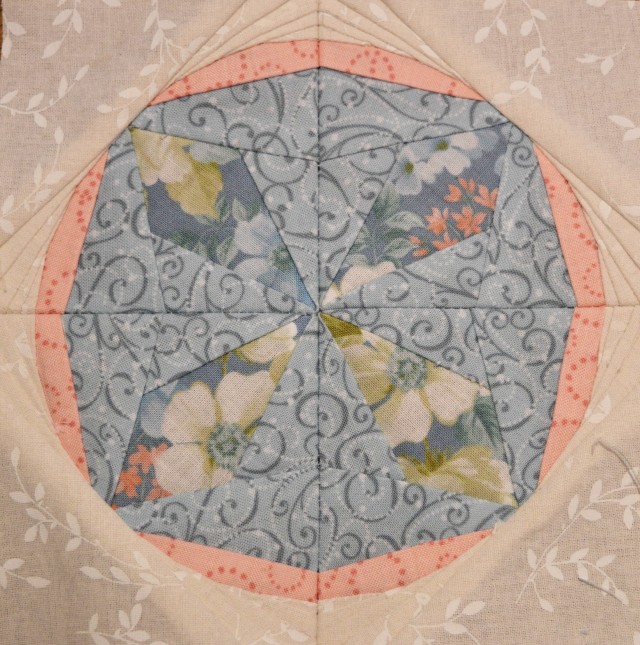 The second block is called ‘Pencils’, it’s designed by Jane Davidson who is one of the organisers of The Splendid Sampler. I really enjoyed stitching this one, pieces were just nice size, matching wasn’t quite so critical so really there was just the fabric choice to worry about. I really like it and one day I will remember to trim the threads before I take the photographs!

The last FFP block was a quick one, it only has six pieces! Faith Jones designed it and called it ‘Whim’. I don’t feel I’ve got my colour balance right here, I chose two pinks, blues and greens but somehow it doesn’t seem to work as well. I did think about putting some embroidery on it, a bit like crazy patchwork, but I’ll have to work up a bit of enthusiasm for it first!

I’ve just cut out an outfit from one of my saris, as I want to wear it in eight days time I think I need to have a short break from Splendid Sampler to crack on with dress-making!

I live in a busy market town in Yorkshire with my husband, kids, dogs and chickens. I love trying new crafts, rediscovering old ones, gardening, walking...anything creative really I started this blog after my New Year resolution worked so well. My resolution (the first one I've ever kept!) was to post a photograph of my garden on Facebook every day. My hope was that I would then see what was good in the garden and not just weeds and work, which was my tendency. The unexpected side-effect was that I have enjoyed many more hours in the garden. I am hoping that 'The Crafty Creek' will have the same effect. Happy creating!
View all posts by craftycreeky →
This entry was posted in Quilting, Serendipity, Splendid Sampler Quilt and tagged #mysplendidsampler, Foundation Paper Piecing. Bookmark the permalink.

11 Responses to Paper Piecing for The Splendid Sampler